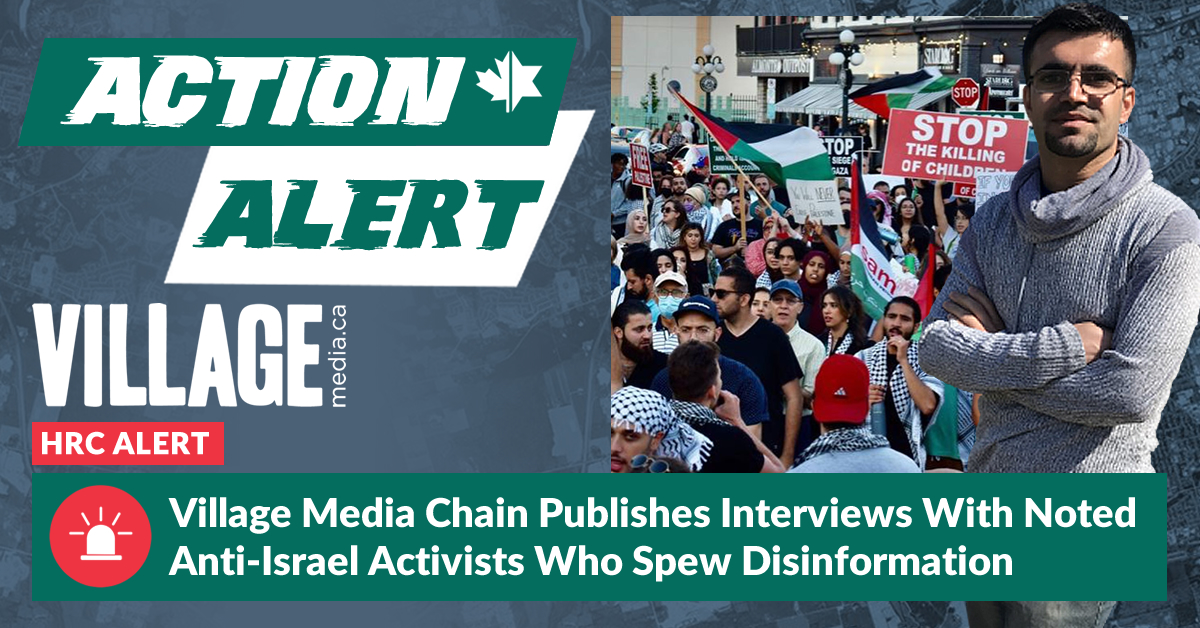 After publishing our Action Alert on August 28, Village Media has updated its story to include a statement from our Executive Director, Mike Fegelman, which has also subsequently been published on Yahoo! Life:

“There is no logic to the contention that Israel is a tool of imperial hegemony or that [it] is a settler colony. In fact, the truth is the exact opposite. Israel, as the nation-state of the Jewish People, is the very epitome of anti-colonialism, being home to roughly half of the world’s Jewish population, who are indisputably indigenous to the Land of Israel for the last three thousand years,” Fegelman said in an e-mailed statement.

In early August, Palestinian Islamic Jihad (PIJ), an Islamist terrorist group based in the Gaza Strip, fired more than a thousand rockets into Israeli population centers, attempting to kill and injure as many Israelis as possible.

Although the rockets have quieted as a result of an Egyptian-mediated ceasefire, Israel continues to face a barrage of disinformation, seemingly without respite.

One notable recent example is an August 24 article, originally produced by New Canadian Media, and then published by Village Media, which syndicated the story to its local publications across Canada.

My newest piece at @NewCdnMedia on Israeli brutality in Palestine.
Canada is silent on Israeli aggression in Palestine yet it’s quick to condemn Russia’s attack on Ukraine.https://t.co/I8EDIkyD6y

The article entitled: “Palestinians accuse Canada of having a double standard on Israel,” by reporter Diary Marif, was replete with statements from interviewees alleging falsehoods against Israel, with no context or critique provided by Marif, who also repeated deeply problematic phraseology referring to Israeli counter-terrorism actions. This is not at all surprising given that Marif alleged on Twitter that Israel commits “brutality in Palestine” and that “Canada is silent on Israeli aggression in Palestine yet it’s quick to condemn Russia’s attack on Ukraine.”

For example, throughout the article, Marif serves to subtly challenge Israel’s rationale for defending itself against PIJ assaults, but fails to offer such challenges to Palestinian interviewees.

Marif writes that with Israel’s activities against PIJ, “it claimed thwarted alleged planned rocket attacks,” casting doubt on Israel’s claims, and neglecting to interview any Israeli subject for the article. However, when describing Israeli counter-terrorism operations, Marif uses terms to describe them such as “brutality,” “assaults” or “bombardments,” and never puts context to problematic claims made by Palestinian interviewees.

Marif quotes one interview subject, Mark Ayyash, as saying “We are a people who have not forgotten, and will never forget, the lands from which we were expelled and continue to be expelled.”

Given Marif’s repeated tacit challenges of Israel’s claims, it is surprising to see no pushback against Ayyash for such a remarkable claim, that of Israeli expulsions against Palestinians, both historical and current.

But despite the allegations lobbed against it, Ayyash provides no evidence for his superlative assertion. In truth, Israel is not expelling Palestinians today, nor has Israel done so historically. In 1948, when Israel declared its independence and was almost immediately attacked by neighbouring Arab countries attempting to destroy the nascent state, a significant number of Arabs in Israel left at the behest of Arab leaders.

This convenient historical omission is unsurprising coming from Mark Ayyash. Ayyash, an associate professor at the University of Calgary, has previously written anti-Israel disinformation for Al Jazeera, namely accusing Israel of being a “settler colonial” state.

Ayyash continues his campaign of fiction in his remarks to Marif, when he argues “Israel is part of the Euro-American imperial hegemony, it was created as a settler colony in Palestine.”

To this allegation, one is reminded of a phrase by the late writer Christopher Hitchens, who argued that ‘what can be asserted without evidence can also be dismissed without evidence.’ There is no logic to the contention that Israel is a tool of imperial hegemony or that is a settler colony. In fact, the truth is the exact opposite. Israel, as the nation-state of the Jewish People, is the very epitome of anti-colonialism, being home to roughly half of the world’s Jewish population, who are indisputably indigenous to the Land of Israel for the last three thousand years.

To claim Israel is a settler outpost is not a difference of opinion; it is an assault on objective truth.

Marif also quotes one interviewee, who compares Israel to Russia’s February 2022 invasion of Ukraine, and demands that the international community condemn the Jewish State for its “attacks on Gaza.”

The interviewee, Michael Bueckert, serves as vice president of Canadians for Justice and Peace in the Middle East (CJPME), an organization that has endorsed the one-state solution, the de facto elimination of Israel as a state.

While interview subjects may make non-sequiturs in their conversations with reporters, the duty of a journalist is to not merely be a stenographer for disinformation but to provide meaningful discourse. The comparison of Israeli counter-terror measures in Gaza to the Russo-Ukraine war is devoid of any logic and parallel and there is no merit to it being covered in the piece.

While ostensibly a straightforward reporting of local reactions to the recent conflict between Israel and Palestinian Islamic Jihad, Marif’s article at times read more like a sophomoric column throwing every conceivable accusation at Israel, in the hope that something sticks. But Village Media is a legitimate publication serving multiple communities across Canada, and this article only serves to muddy the truth of an already complex conflict.