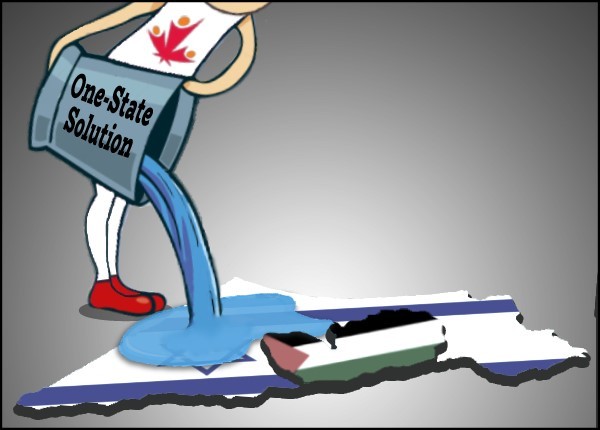 Canada has a long history and a proud reputation as a voice of reason and a promoter of peace around the world, and in the Middle East specifically.

Former Prime Mister Lester B Pearson won a Nobel Prize in 1957 for his efforts in bringing an end to the Suez Crisis in 1956, and silencing the guns between Egypt and Israel.

Today, even as a growing number of Arab and Muslim-majority countries are establishing diplomatic relations with Israel, including Bahrain, the United Arab Emirates, Sudan, Morocco and Kosovo in the last year alone, demonstrating that peace between Israel and like-minded countries is achievable, Canada’s leading anti-Israel organization is attempting to set the cause of peace back by many decades.

Canadians for Justice and Peace in the Middle East (CJPME), a Montreal-based organization which claims to “promote justice, development and peace in the Middle East” as its mandate, recently released a policy paper which called on the Canadian government to disregard decades of progress in the peace process, and be “open to possible alternatives,” including a one-state solution.

The one-state solution is a non-starter for the fundamental reason that it necessarily leads to the destruction of Israel as a Jewish State. Israel would cease to be a Jewish State because the country home to fewer than seven million Jews would be swallowed up in a massive demographic shift, rendering Jews a minority almost immediately in another Muslim majority state in the Middle East due to the influx of millions of Palestinian-Arab refugees and their descendents. The Jewish People’s collective right to reconstitute their historic homeland was recognized in the Balfour Declaration, and codified under international law at the San Remo Conference in 1920, and today Israel remains the world’s only Jewish nation state. But Israel’s existence in no way precludes the right of the Palestinians to self-determination. In fact, Israel has made repeated peace offers to the Palestinian Authority, each one rejected or otherwise ignored.

CJPME writes in their position paper that “it is evident that the current emphasis on a two-state solution has become an obstacle to progress towards a just resolution,” but this is patently false. At least on paper, all parties have agreed to a two-state solution, and it is the only option which will provide both Jews and the Palestinians with a state of their own.

However, the fact remains that the two-state solution – a Jewish State, and a Palestinian-Arab State – is considered the most viable option for a just and lasting peace in the region. To do away with this model is to disenfranchise the Jewish People from self-determination in their historic homeland, and would be a crime against morality, not to mention running entirely contrary to international law.

CJPME argues that a proposed Palestinian state – in the Gaza Strip, eastern Jerusalem and Judea & Samaria (commonly called the West Bank) – isn’t sufficient, calling it a “Bantustan.” CJPME would do well to remember that in 1947, the United Nations Partition Plan for Palestine carved out most of the Jewish People’s historic homeland, and awarded the vast majority to the Arabs, leaving only a tiny sliver of the coastline for the Jews, and Jerusalem – the holiest place for Jews – under international control. Still, the Jewish delegates to the United Nations accepted, recognizing that although they are indigenous to the land, negotiations mean that one party cannot get everything they want. The Arab delegates to the United Nations, meanwhile, rejected the partition plan, and promptly invaded Israel, attempting to destroy it. Fortunately, they did not succeed.

Today, what the Arab states failed to do on the battlefield is being promoted in self-styled policy papers instead, but the goal remains the same: the elimination of Israel as a Jewish State.

The biggest obstacle to peace between Israel and the Palestinians remains the refusal to accept Israel’s right to exist. Anyone who doubts this reality needs to look no further than Palestinian Authority-produced school textbooks, mosque sermons and state media, which actively incites its own people against the very thought of a Jewish State.

And yet, CJPME would have Canadian journalists and policy makers believe that Jews would have their rights respected as a minority in a binational state, where the Palestinian leadership rewrites history and claims that Jews have no right to be in Israel in the first place. History has taught the Jewish People the consequences for giving up their lawful rights.

It is not enough for this dangerous and counter-productive proposal from CJPME to be rejected out of hand. It is critical for Canadian policy makers, journalists and the mainstream news media to recognize CJPME for what it is: not a voice of reason, solutions or peace, but an anti-Israel organization devoted to demonizing the Jewish State and promoting destructive propaganda that protracts the conflict.