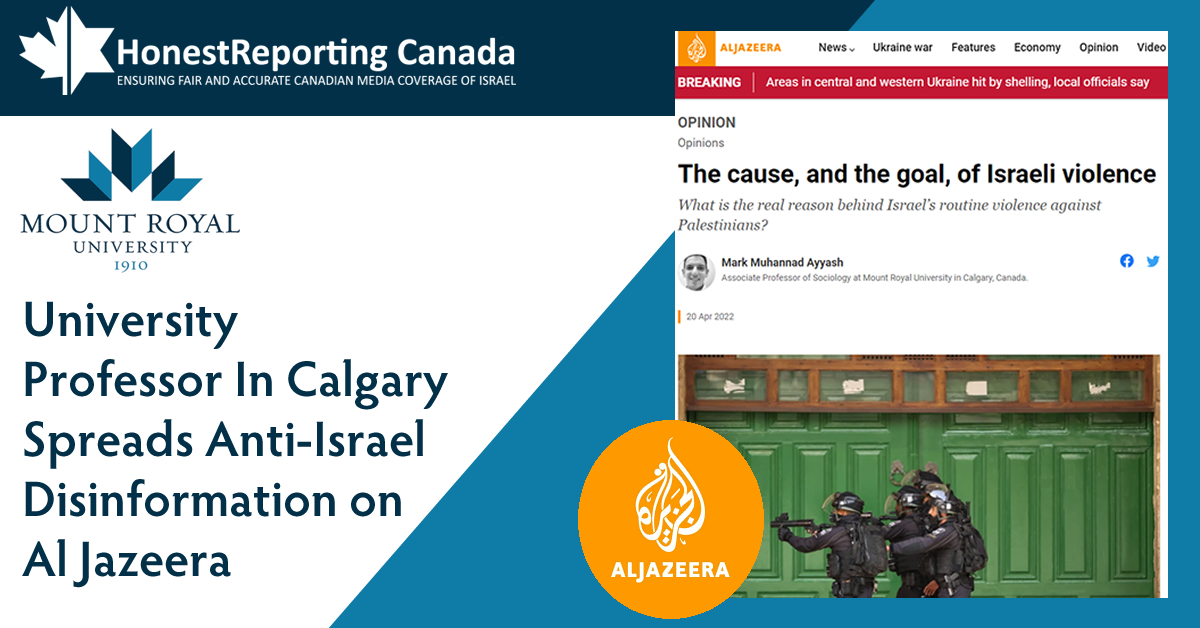 In a recent opinion article published on Qatar-based Al Jazeera, “The cause, and the goal, of Israeli violence,” Mark Muhannad Ayyash, an Associate Professor of Sociology at Calgary’s Mount Royal University, attempts to weave together anti-Israel disinformation and a wholesale rewriting of history into a single pop sociological lecture.

This is not the first time that a Canadian university professor took to the pages of Al Jazeera, a Qatari state-funded news outlet that is banned in many countries because of its antisemitism and bias, to spout anti-Israel propaganda. Last October, a Sheridan College lecturer dehumanized Israeli soldiers in a shocking opinion column.

For his part, Ayyash referred to Israel’s “attack on Palestinian worshipers at the Al-Aqsa Mosque,” and attempted to frame it as part of Israel’s identity, built “on a foundation of settler colonial sovereignty.”

This is fanciful, ahistorical fiction.

With respect to the violence in the Al Aqsa Mosque (built atop the ancient Temple Mount), it was caused – as it was in May 2021 as well – by the stockpiling and throwing of rocks and incendiary devices by Palestinian extremists. Some of these rocks were used to pelt Jewish worshippers in the Western Wall plaza located below the Temple Mount and others were hurled at Israeli Police.

It was as a result of this wanton violence that Israeli police entered the mosque, and where Palestinian rioters responded with further violence.

Not only was Ayyash’s depiction of Palestinian rioting on the Temple Mount as being somehow Israel’s fault driven by ideology, not facts, his attempt to describe Israel as a settler-colonial state, which purportedly “must secure and expand supreme sovereign control over the land of historic Palestine,” is even more fantastical.

Ayyash’s argument rests on either remarkable ignorance, or of an ideologically-driven agenda. Jerusalem was founded as the capital of the Jewish nation-state three thousand years ago, and Jews have inhabited the land for three millennia, outlasting a string of foreign invaders, including the Greeks, Romans, Byzantines and others.

After the Roman Empire sacked Jerusalem and expelled many of the region’s Jews two thousand years ago, they purposefully changed the name of Judea into Palestine (after an ancient seafaring group, the Philistines). Thus, what Ayyash refers to as “historic Palestine” is in actuality ancient Judea, which is where the term Jew originates.

Today, the State of Israel, while possessing only a fraction of its historic homeland, nevertheless has repeatedly offered the Palestinians a huge swath of ancient Israel in exchange for peace. Most notably, during the 2000 Camp David negotiations, then-Israeli Prime Minister Ehud Barak offered Palestinian Authority (PA) Chairman Yasser Arafat all of Gaza, eastern Jerusalem, and virtually all of Judea & Samaria (often called the West Bank). His offer was rejected, and Palestinian violence ensued.

Nevertheless, in 2005, Israel voluntarily withdrew from the Gaza Strip, uprooting thousands of its own citizens from the enclave. But before long, the 360 square kilometre area became a fiefdom for Hamas, the Islamist terrorist group, and a launching pad for terrorism against Israel.

In 1948, Israel achieved independence from the United Kingdom, which had previously overseen management of the land. For nearly two thousand years, since the Roman occupation of Judea, had the Jewish people achieved self-determination in their historic homeland, but Ayyash somehow sees fit to describe this yearning as somehow colonial.

While the contemporary State of Israel today sits on only a portion of its historic land, Israel has shown time and time again its willingness – even enthusiasm – to give up land in the cause of peace. But every offer it has made to the Palestinians has been rejected, and often met with violence.

After three thousand years, the Jewish People clearly will not be giving up their historic homeland. Still, much of Palestinian rejectionism today is based on this baseless hope. Though Ayyash may believe his opinion article helps the Palestinian cause, all it does is enable the long-running Palestinian failure to achieve self-determination. The sooner that Ayyash and others accept Israel’s right to exist, and legitimacy as a nation-state, the better off Palestinians will be.