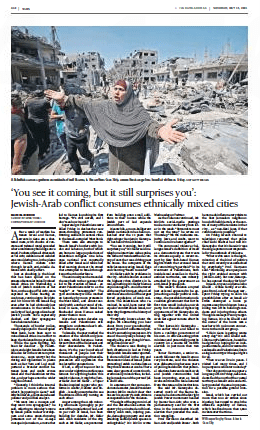 HRC has communicated our concerns directly to the Globe and Mail about a May 15 article by Mark Mackinnon that was replete with errors.

To start, the sub-headline appropriated by Globe editors erroneously stated: “This weekend is the anniversary of the 1948 war that created Israel, and deadly violence in Gaza and beyond has underscored how far Israelis and Palestinians are from peace and mutual understanding”

Contrary to this statement, Israel was established on May 15, 1948 and after the announcement of the declaration of independence of the state of Israel, there was an invasion by five Arab armies seeking Israel’s destruction. The war didn’t create Israel, the creation of Israel as per the Partition Plan triggered a war of annihilation by the Arab world seeking the Jewish state’s destruction.

The animosity can be traced all the way back to the 1948 war that led to the creation of Israel – an event Palestinians refer to as the “naqba” or “catastrophe.” The 73rd anniversary will be marked on Saturday by more protests in the West Bank, and almost certainly with another round of violence in Gaza, which Israel has blockaded since Hamas seized power there in 2006.

More than seven decades on, Israelis and Palestinians still struggle to understand each other’s versions of 1948.

To Israelis, the year marked the creation of the world’s only Jewish state, which became a haven for survivors of the Holocaust and their descendants. To Palestinians, it’s the year hundreds of thousands of people lost their homes, the beginning of mass dispossession and oppression that has lasted for generations.”

Contrary to this statement, survivors of the Holocaust found refuge in British Mandatory Palestine before Israel’s creation to join family there after the war in 1945 and to fulfill a Zionist dream. It was in 1946 that most Holocaust survivors made their way to Palestine. When the war of 48 broke out, they found themselves – years after surviving an attempted genocide – fighting against the possible annihilation of the Jewish people yet again. 10,000+ Holocaust survivors fought in the War of Independence.

Importantly, it was only  couple days ago that Mark Mackinnon outrageously insinuated on a Globe podcast that Israel was created because of the Holocaust which led to the mass dispossession of Palestinians by “Jewish Israeli(s) who moved into this new land.”

Later on in Mackinnon’s article he wrote (emphasis added): “In a statement that some condemned as racist, Israeli President Reuven Rivlin made it clear that he saw his country’s Arab citizens as responsible for the violence. ‘The sight of the pogrom in Lod and the disturbances across the country by an incited and bloodthirsty Arab mob, injuring people, damaging property and even attacking sacred Jewish spaces is unforgivable,’ Mr. Rivlin wrote Wednesday on Twitter.”

“Some?” Mr. Mackinnon himself accused President Rivlin of racism on Twitter:

This is the President of Israel, describing citizens of his country in openly racist terms. https://t.co/ASGFv10RXA

That wasn’t an objective statement for a Globe and Mail journalist to make.

Lastly, untold by Mackinnon, Israel’s blockade of Hamas-run Gaza is done jointly with Egypt to prevent Hamas from arming and to prevent terror attacks.

We await a reply from the Globe in response to our request that corrective action be undertaken. Stay tuned to this page for future updates.