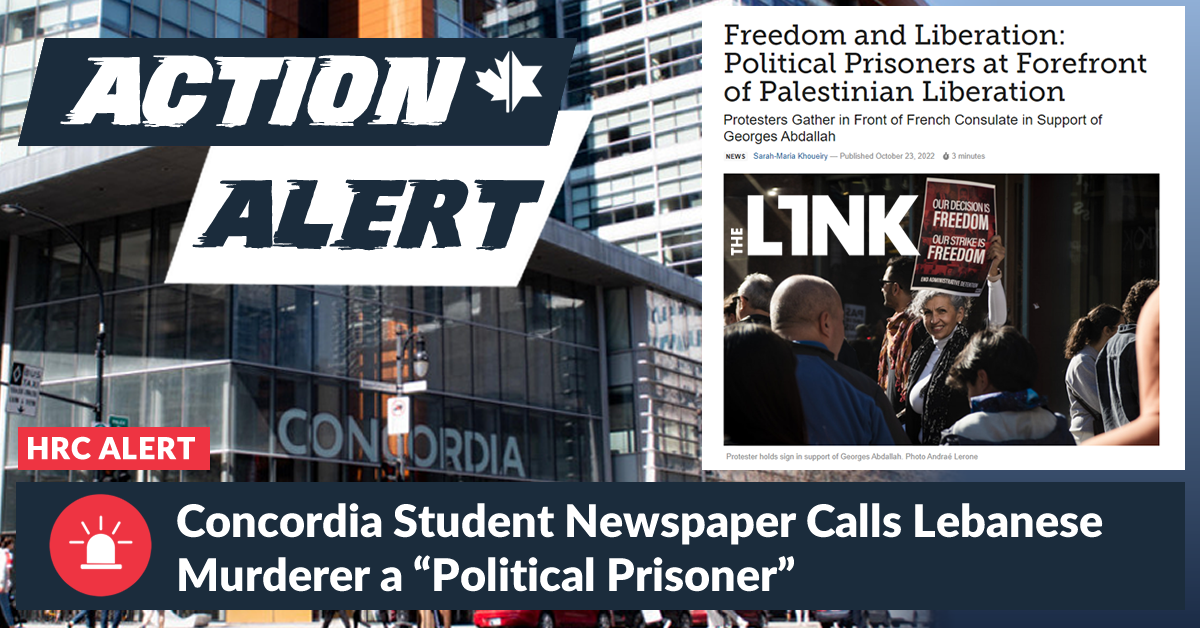 On October 22, a protest was held in downtown Montreal in front of the French consulate in support of Georges Abdallah, a 71-year-old man serving a life sentence in France.

The Link, a student newspaper serving Concordia University, covered the demonstration in a news article by writer Sarah-Maria Khoueiry entitled: “Freedom and Liberation: Political Prisoners at Forefront of Palestinian Liberation.”

Abdallah is currently serving a life sentence for his involvement in the murders 40 years ago in Paris of Yakov Barsimentov, an Israeli diplomat, and US military attaché Charles Ray.

After his arrest in France in 1984, he was unrepentant in his crime, telling French police that “I do what I do because of the injustice done to human rights where Palestine is concerned.”

In its coverage of the rally in Montreal, The Link echoed the demonstrators’ talking points while whitewashing Abdallah’s history as a terrorist.

One protestor, Niveen Abu Elulla, framed Abdallah’s acts of terrorism merely as resistance, telling The Link that “the fight is transnational. He’s a Lebanese man who fought for the Palestinian cause his whole life.”

As deeply problematic as it is to describe someone who murdered two people as supporting a just cause, it is even more shameful when The Link did little more than repeat those same messages.

The Link referred to Abdallah as a “political prisoner,” even immediately after mentioning his 1984 arrest for the two murders.

While political prisoners certainly do exist in the world, it is abhorrent to refer to a murderer using such an honorific.

If The Link is unable to identify who real political prisoners are, the Palestinian Authority (PA) is home to many political prisoners – individuals who are languishing in PA prisons for more than a year for the crime of opposing the regime of Mahmoud Abbas.

The rally in Montreal was organized by a group called the Palestinian Youth Movement (PYM), which has held anti-Israel protests recently and which evidently has found a willing and vocal ally in The Link, which appears to do little more than regurgitate its views to a wider audience.

“Abdallah’s imprisonment is a symbol, according to the PYM, of the strength and determination of the Palestinian intifada. To them, his prolonged imprisonment is proof of the power the resistance holds, of how Zionist governments feel threatened by the potential of people like Abdallah,” The Link wrote, all but erasing Abdullah’s crimes, and instead positioning him as a folk hero of the Palestinian cause.

The Link’s sympathetic coverage of the demonstration falls in line with its recent behaviour, including a May 28 article covering a fringe anti-Israel rally comprising barely a dozen participants, also in downtown Montreal, in support of Palestinian prisoners serving time inside Israeli jails, some of whom are very high-risk security threats to Israel’s safety.

While The Link certainly has a pattern of whitewashing anti-Israel rallies and acting as the stenographer for their cause, the anti-Israel movement continues to actively excuse at best, and promote at worst, the actions of murderers.

A such, Georges Abdallah is far from the first terrorist to be praised by anti-Israel activists, and tragically is unlikely to be the last.

In early October 2022, a young Palestinian man named Uday Tamimi murdered an 18-year-old Israeli woman in an unprovoked attack. After being on the run for 11 days and attempting to commit another terrorist attack, he was killed in an exchange of gunfire with Israeli security guards outside a town.

In the aftermath of his death and as documented by HonestReporting Canada, two editors of Arabic-language newspapers in Mississauga, Ontario applauded Tamimi, referring to him as a “martyr” and as someone who “hurried to the glory carrying out the commitment/obligation.”

The October 22 rally in support of a convicted terrorist is a stain on Montreal, and the only detail which rubs salt in the wounds is the tacit endorsement of the event given by The Link newspaper.

Take Action Now! Send a complaint to the Concordia Link’s Editor-in-Chief to voice your concerns about The Link’s fawning coverage on October 23 of a Lebanese terrorist murderer that it portrayed as being a political prisoner. Send emails to: editor@thelinknewspaper.ca.