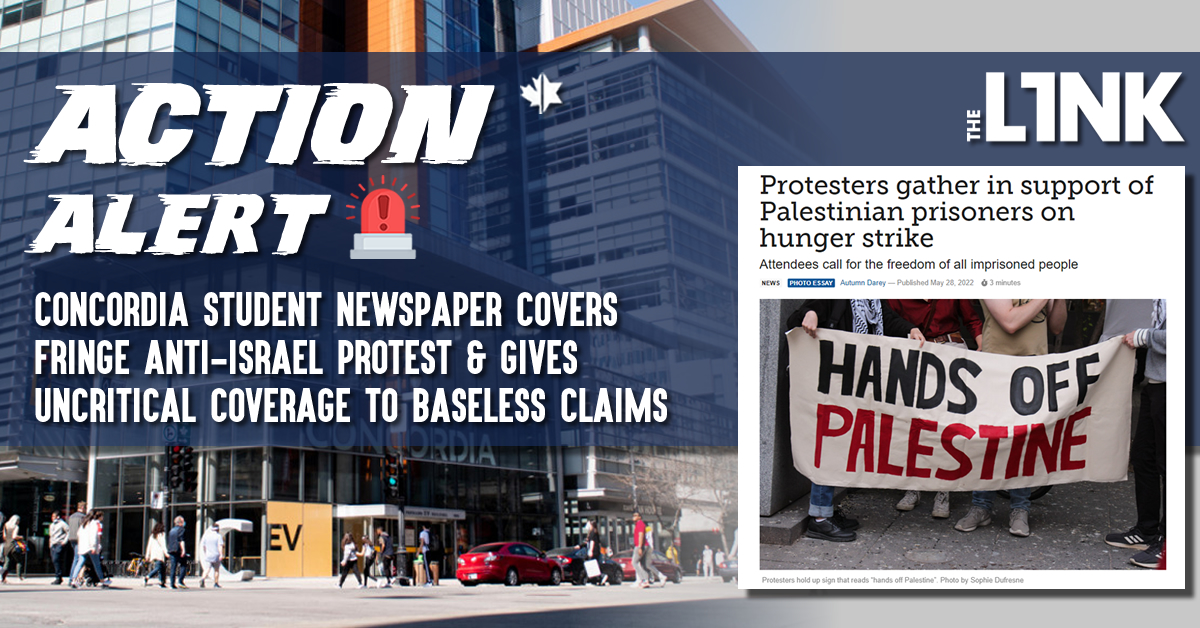 The Link, an independent student newspaper at Concordia University in Montreal, has published a string of anti-Israel articles in recent weeks, including accusing Israel of murdering a Palestinian journalist, whitewashing an anti-Israel rally, and giving a full-throated endorsement of Amnesty International’s deeply problematic report erroneously accusing Israel of “apartheid”.

And now, The Link is at it again with a May 28 article covering an anti-Israel rally in downtown Montreal entitled, “Protesters gather in support of Palestinian prisoners on hunger strike,” by writer Autumn Darey.

In the article, Darey reported on a rally featuring “just over a dozen people” on May 25 in support of Palestinian prisoners serving time inside Israeli jails.

While it certainly is The Link’s prerogative to cover any story they like, even if it’s a tiny fringe protest with nary a dozen individuals, the content of the report leaves much to be desired.

For example, Darey writes that the event was in support of two Palestinian prisoners in Israeli jails, Khalil Awawdeh and Raed Rayyan, who are “on hunger strike in Israeli detention, without food or water…”

It hardly needs to be pointed out that it is not Israel, but the two prisoners themselves who are intentionally harming themselves with a hunger strike.

Israel, as a country governed by the rule of law, provides prisoners with all the necessities of living in conformity with international law, and although Awawdeh and Rayyan are intentionally depriving themselves of food and water, it is not Israel who is responsible for this deprivation.

More problematically, Darey gives no context as to why these two men were arrested by Israeli troops. Had The Link done so, readers would have learned that Awawdeh and Rayyan are hardly political prisoners swept off the streets for no reason. They were arrested by Israel’s security services and placed under administrative detention, which is done for prisoners thought to be involved in security and terrorism-related incidents or planning of attacks.

The Link quotes Reem, a pro-Palestinian activist and organizer of the rally, who tells the newspaper that the prisoners “do not have access to legal representation.”

This is false. The two prisoners, despite the serious threat that Israel evidently sees in them, enjoy visits from their legal representation and have also been taken care of in Israeli civilian hospitals, paid for by Israeli taxpayers.

The Link quotes the Al Jazeera news service as reporting that 530 of the roughly 4,450 Palestinian prisoners in Israel are imprisoned under administrative detention. But this fact does not serve to bolster the anti-Israel claim; in fact, quite the opposite.

First, administrative detention – a concept in other countries as well – is reserved for often the most dangerous, or time-sensitive of prisoners. Israel does not arrest Palestinians without cause, and no evidence has been marshaled to suggest either Awardeh or Rayyan or innocent.

Secondly, the fact that less than 12 percent of Palestinian prisoners in Israel are under administrative detention lends further credence to the reality that this legal status is instituted only under exceptional circumstances.

The Link quotes Reem as saying “We usually talk about the occupation; the bombings, but we forget to uplift the voices of the prisoners who are imprisoned because of their political work and their resistance…”

This is quite a fanciful way of whitewashing or otherwise dismissing the very real threats of terrorism that Israel regularly faces.

While the claim of an illegal Israeli occupation is false, with Israel possessing legal title to the land in question, one is still entitled to hold any opinion they want, no matter how baseless. But it does not give anyone the right to engage in violent armed “resistance” against Israel, even under the guise of “resistance” to a non-existent illegal occupation. Let’s not forget that in recent weeks, there has been a spate of Palestinian terrorist attacks in Israel, killing nearly 20 people.

Palestinian terrorist groups euphemistically call their brutal acts of terrorism “resistance,” even though that is remarkable whitewashing of a brutal reality.

By giving these fringe protesters an unfettered platform to share their allegations against Israel, readers of The Link are being given a false impression, not only that the plight of suspected Palestinian terrorists in Israeli jails are a cause of concern for many Montrealers, but that these prisoners are simply hapless victims and political prisoners.

But there is no evidence to suggest these prisoners are innocent, and hardly surprising that only a dozen individuals in Montreal, out of a metropolitan population of four million, came to stand with security prisoners. Support for these prisoners is clearly low, as it should be. Those who are concerned about justice should focus their energies instead on condemning Palestinian terrorism, but evidently, The Link decided that a dozen protesters merited more coverage instead.

Take Action Now! Send a complaint to the Concordia Link’s Editor-in-Chief, Gabriela Vasquez-Aronson, to voice your concerns about The Link’s covering a fringe anti-Israel protest on May 28 and its gives uncritical coverage to baseless anti-Israel claims. Send emails to: editor@thelinknewspaper.ca.