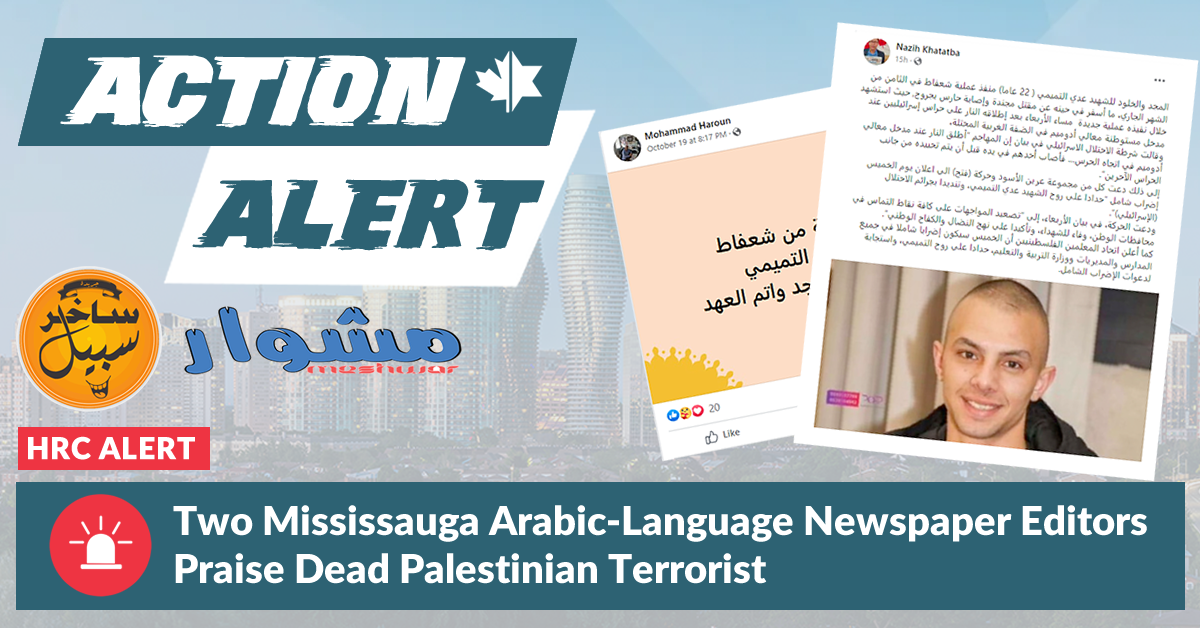 On the evening of October 8, 2022, Noa Lazar was overseeing an Israeli security checkpoint in eastern Jerusalem when a vehicle sped towards her. Out of the car jumped Uday Tamimi, a 22-year-old Palestinian man, who shot Lazar to death before fleeing the scene. A 30-year-old security guard was also critically injured in the attack, but survived.

Lazar was only 18-years-old when she was murdered by Tamimi. Immediately afterwards, Israeli forces began a manhunt to identify and track down Tamimi. For more than 10 days, they searched for him, until he re-appeared on October 19, when he committed another attack, this time shooting at security guards near the Israeli town of Maaleh Adumim.

In the firefight, he was shot dead, potentially preventing even more attacks against Israel. Even in his dying breaths, video footage (warning: graphic content) shows him wildly firing at security guards, rather than surrendering.

For his murder of an innocent 18-year-old young woman and his attempted murder of others, Tamimi was quickly hailed as a “hero” by Hamas, along with Palestinian Authority President Mahmoud Abbas’ Fatah party, and by Palestinians throughout the territories.

On October 20, Palestinians in eastern Jerusalem as well as Judea & Samaria (the West Bank) held a one-day general strike to mourn Tamimi’s death.

Tamimi was also praised by Arabic media across the region, including Al-Manar, the media outlet owned and operated by Hezbollah, the Lebanon-based Shia Islamist terrorist group.

Such praise for a murderer is hardly surprising coming from a Hezbollah-affiliated “media” outlet, but that was not the only source of admiration for Tamimi.

Nazih Khatatba, Editor of Meshwar Media, a Mississauga-based Arabic-language newspaper, joined the fray by offering his own applause for Tamimi’s bloody actions. 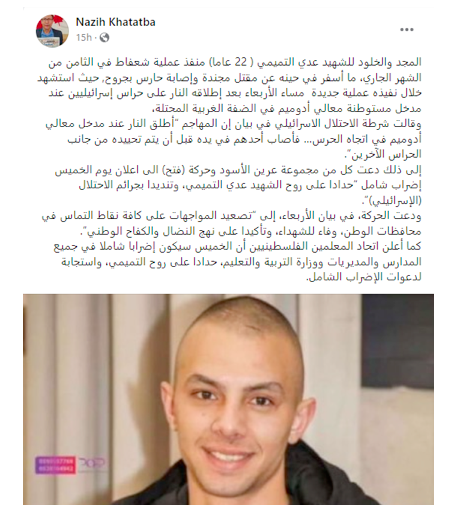 Writing in Arabic on October 19, Khatatba penned an ode to Tamimi on his personal Facebook page, writing: “Glory and eternity to the martyr Uday Al-Tamimi (22 years), the perpetrator of the Shuafat attack on October 8, [2022] which resulted in the death of a female soldier and the wounding of a security guard. He was martyred during a new operation on Wednesday evening after he shot Israeli security guards at the entrance to the Ma’ale Adumim settlement in the occupied West Bank…”

Khatatba is no stranger to spreading hateful anti-Israel propaganda. HonestReporting Canada has previously documented his egregious claims against the Jewish State, including allegations that the Mossad was secretly behind the killing of Israeli athletes at the 1972 Olympic games in Munich, and referring to the Holocaust as the “Holohoax” and “virtually the biggest lie in history.”

Not to be outdone, another Arabic-language journalist in the Greater Toronto Area also took to social media to offer his words of adoration for Tamimi.

Mohammad Haroun, the owner and editor-in-chief of Sakher Sabeel Newspaper, also based in Mississauga, and writing in Arabic on his Facebook page on October 19 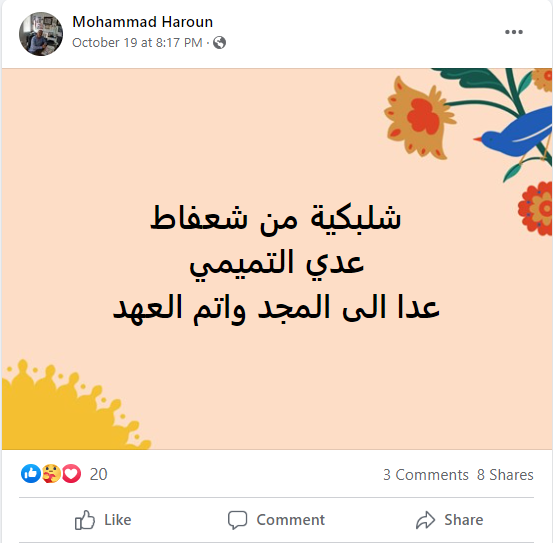 , described Tamimi as someone who “hurried to the glory carrying out the commitment/obligation.”

HonestReporting Canada has independently verified the translation of Mohammed Haroun’s words from the original Arabic.

While Haroun wrote the above comment on his personal Facebook page, his publication has a documented history of praising dead Palestinian terrorists. In August, HonestReporting Canada exposed how Sakher Sabeel, the newspaper owned by Haroun, applauded the actions of Palestinian Islamic Jihad (PIJ), an Islamist terrorist group, for their acts of violence against Israel. The same alert provided examples of the newspaper sharing images describing terrorists as “martyrs.”

In the recent case regarding Uday Tamimi, both Khatatba and Haroun placed a murderous terrorist, Uday Tamimi, on a pedestal with their words of acclamation, and this constitutes far more than a case of a simple political disagreement.

By referring to a murderer as a “martyr” on his way to finding “glory,” both Khatatba and Haroun are not only defending, but in our view, actively celebrating brutal acts of violence which took the life of an 18-year-old young Israeli woman and injured several Israelis.

Furthermore, such words of praise can also serve to inspire others to potentially follow in Tamimi’s footsteps. After all, if by killing a young woman enables Tamimi to attain glory and martyrdom, then perhaps it can also be gained by someone else too who carries out similar attacks?

The Canadian news media owes a duty to all Canadians by taking notice of this alarming content, by exposing these posts, and by ensuring that such abhorrent words are condemned.