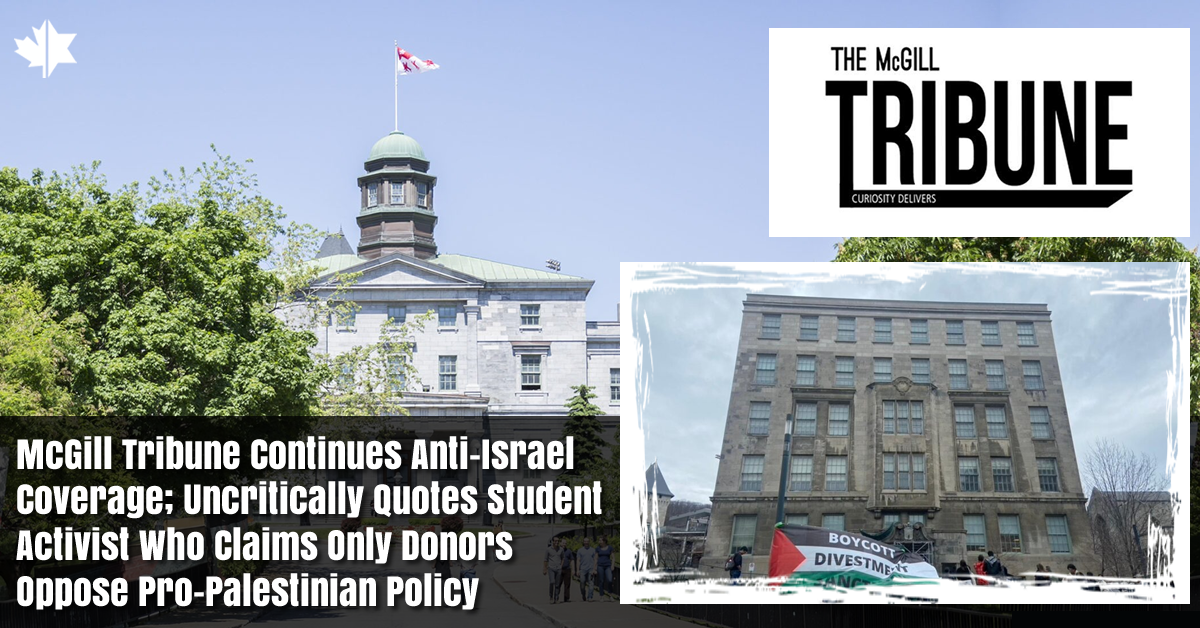 The McGill Tribune is at it again.

The Palestine Solidarity Policy, which called on the Students’ Society of McGill University (SSMU) to regularly engage in anti-Israel posturing on campus, passed despite seeing only a tiny number of eligible students vote.

In the immediate aftermath of the vote, the McGill University administration admonished the SSMU, calling the policy divisive and demanding the student union take “remedial action.”

Despite fewer than 10 percent of eligible McGill University students voting for the policy, The McGill Tribune has repeatedly covered the issue, rehashing anti-Israel tropes, and attempting to draw a parallel between the war between Russia and Ukraine, and Palestinian terrorists murdering Israeli civilians.

In the latest article, The McGill Tribune’s Ghazal Azizi and Lily Cason, take issue with the SSMU’s decision that they would not be ratifying the Palestine Solidarity Policy, which the student union concluded contradicted the SSMU Constitution, the SSMU Equity Policy, and Quebec provincial law.

Unfortunately, in the Tribune’s most recent coverage of this saga, every single interviewee expressed support for the anti-Israel policy, and no dissenting voices were cited beyond the university administration itself.

The Tribune quoted one student, Sarah Abdelshamy, an activist with the Palestinian Youth Movement group, who told an April 25 rally in support of the Palestine Solidarity Policy that the only reason the university administration opposed it was to satisfy major stakeholders.

“The only division that this motion (to oppose the Palestine Solidarity Policy) causes is between the university and its donors—the only relationship that the administration is capable of or desires to protect and uphold,” according to Abdelshamy.

This claim is simply preposterous.

Abdelshamy’s claim completely disregards the concerns of McGill’s Jewish student body, who in recent years has been subjected to a string of antisemitic and anti-Israel propaganda.

In early 2017, Igor Sadikov, a member of SSMU’s legislative council, published “Punch a Zionist” on his personal Twitter account. The McGill Daily, another campus newspaper, in 2016 explicitly refused to publish any pro-Zionist opinions. And Jewish students who dared to express their support for Israel, the world’s only Jewish State, faced harassment and verbal abuse from their peers.

It is against this backdrop that Abdelshamy’s claims are so demonstrably ludicrous.

The anti-Israel movement, whether at McGill University or on other college and university campuses across North America, seeks not to create dialogue and lower barriers of misunderstanding, but to demonize and delegitimize Israel, and to isolate any student who fails to fall into the anti-Israel ideological line.

As is the case in Europe and the United States, Jews are a frequent target of hate crimes, according to recent statistics. Quite often, antisemitic hate spikes during periods of intensified tensions in the Middle East. During the spring of 2021, during Hamas’ war against Israel, antisemitic assaults increased throughout the Western world.

By declaring that the only stakeholders opposing the anti-Israel activity at McGill University are donors, Abdelshamy – and The McGill Tribune, which repeated her assertion without any context or clarification – are de facto erasing not only the concerns shared by Jewish students on campus, but the very real threats they have faced, and continue to face.

While The McGill Tribune can pick and choose to publish whatever it wants, even if that means obsessively covering a tiny fringe movement of anti-Israel activists on campus, it is their right to do so. However, the newspaper has an obligation to not simply regurgitate the talking points of anti-Israel campus groups, including claims that Palestinian students are widely harassed on campus and that only university donors oppose the Palestine Solidarity Policy, but to critically examine these assertions.

Jewish students at McGill University, like members of the wider Jewish community, face disproportionate discrimination relative to their numbers, but to a casual observer reading The McGill Tribune, the biggest issue facing students on campus is the lack of sufficiently anti-Israel activism.

Not only does said anti-Israel activism reflect a small fringe of students, but it is both unproductive to everyday Palestinians, and serves only to demonize Israel and indeed all Jews who identify with the Jewish State.

If The McGill Tribune wishes to continue to cover this news story, then it must avoid uncritically parroting anti-Israel claims on the part of its interviewees, and start asking the tough questions. That’s the least it owes to McGill students.

We encourage our readers to — politely, but firmly — contact The McGill Tribune to express your concerns about its continued anti-Israel coverage and its uncritically quoting a student activist claiming that only donors, and not Jewish students at McGill who are subjected to antisemitic and anti-Israel propaganda, opposed the SSMU’s pro-Palestinian policy. Send emails to: editor@mcgilltribune.com.