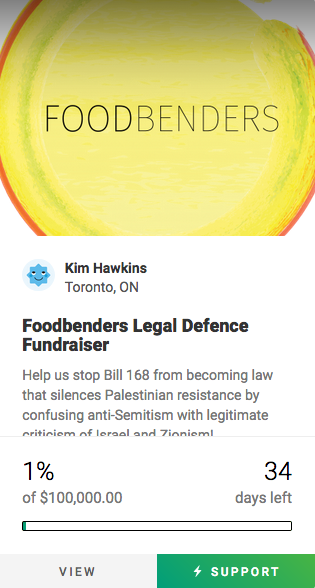 Canadian media take note, after having her previous fundraisers removed by GoFundMe for violating the sites terms of service, Kimberly Hawkins, Owner of Foodbenders, has found a new platform in LaunchGood, a platform which describes itself as “Crowdfunding Incredible Muslims Worldwide”, to host her latest “Foodbenders Legal Defence Fundraiser” which seeks to raise $100,000 to support her “legal defence fund”.

The latest Foodbenders’ “legal defence fundraiser” is being billed as a campaign to “Help us stop Bill 168 from becoming law that silences Palestinian resistance by confusing antisemitism with legitimate criticism of Israel and Zionism!”

Over the past few months, Foodbenders has received a lot of media attention for a number of antisemitic statements and posts its owner had been making, specifically one which barred Zionists (Jews) from her store. As a result of her disgusting statements, many major businesses which had contracts with the establishment, including UBER Eats, Doordash and Square, terminated their services with Foodbenders. Furthermore, many politicians including the Prime Minister of Canada, the Premier of Ontario and the Mayor of Toronto condemned the antisemitism being spewed by the establishment.

Kimberly Hawkins, the creator of the campaign and again owner of Foodbenders, the beneficiary of the fundraiser, is currently under investigation by the City of Toronto for violating its by-laws in regard to using a licensed business to “discriminate against a member of the public [on grounds of] race, colour, or creed.” [By-law No. 574-2000]

Additionally, Ms. Hawkins and her establishment are also the subject of two Ontario Human Rights Tribunal complaints, as well as a $750,000 defamation lawsuit on behalf of Toronto designer Shai De Luca.