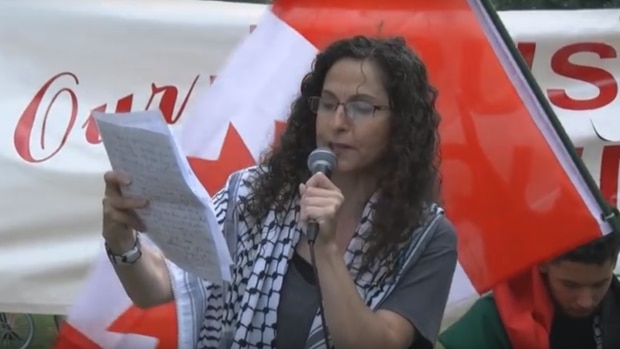 In her latest Toronto Star commentary on November 30, contributor Azeezah Kanji failed to mention that elementary teacher Nadia Shoufani (pictured right) gained notoriety for a speech she gave which saw her “support the resistance (against Israel) in any form imaginable.”

“Resistance” is a Palestinian euphemism which promotes terrorism against innocent Israelis. Shoufani also praised Ghassan Kanafani and Georges Ibrahim Abdullah, two individuals from the proscribed terror group, the Popular Front for the Liberation of Palestine (PFLP). Shoufani has also expressed “glory to the martyrs” — including to Samir Kuntar, a now deceased member of the outlawed Lebanese terror group Hezbollah, who smashed the head of a four-year-old Israeli girl with rocks. In posts on her Facebook page, Shoufani celebrated Kuntar as a “hero among heroes”.