HRC has previously criticized the CBC for producing news coverage which whitewashed Palestinian teen Ahed Tamimi as “the new face of Palestinian resistance”.

Today, we filed a complaint with the CBC as it produced reporting on Tamimi which tacitly questioned if Tamimi had in fact slapped an Israeli solider.

On March 21 and on February 13, CBCNews.ca featured the following reports which were headlined as follows (emphasis added): 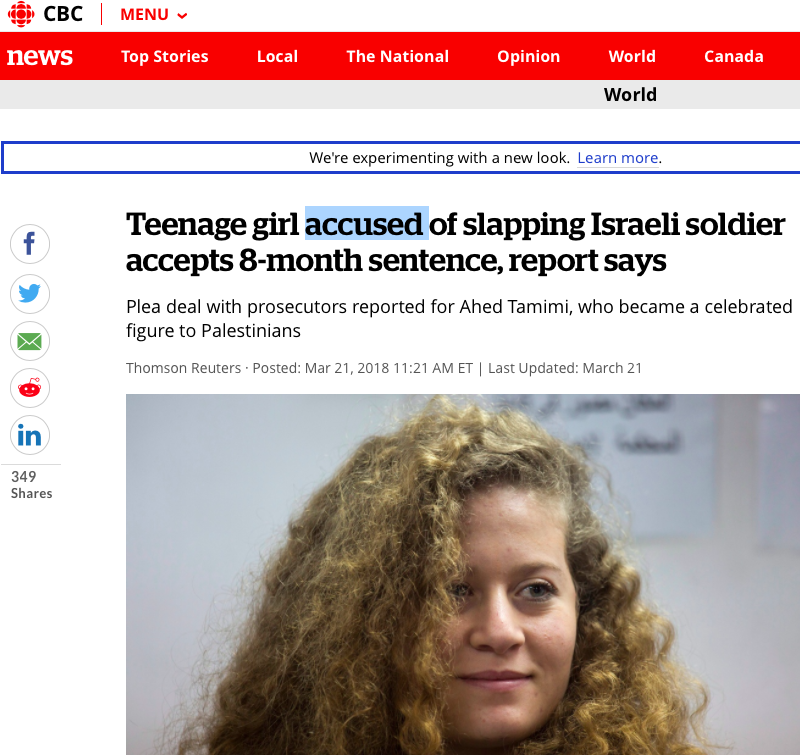 As we told the CBC in a complaint filled today, there’s no question that Ahed Tamimi slapped an Israeli soldier, of which, she admitted doing so and which video confirms the veracity of this matter, and yet, CBC editors included a qualifier by claiming that Tamimi is merely “accused” of this assault in its main headline. In so doing, CBC is tacitly questioning if Ahed Tamimi in fact slapped an Israeli soldier.

In sharp contrast, this is how the Globe and Mail headlined the same Reuters article that CBC published: “Palestinian teen who hit Israeli soldier to serve eight months in prison”. Furthermore, on March 21, CBC The National’s Anchor Andrew Chang stated the following while showing footage of Tamimi slapping the Israeli soldier (emphasis added):

The Palestinian teenager captured on video slapping an Israeli soldier has been sentenced to eight months in prison. 17-year-old Ahed Tamimi was detained outside her home last December after confronting two soldiers. She quickly became a lightning rod: Hailed by her supporters as a ‘symbol of resistance,’ but criticized by many in Israel as a publicity seeker.”

Watch by clicking here or immediately below:

Accordingly, as there’s no dispute about Tamimi having slapped an Israeli soldier, it behooves CBC to amend its headline and remove the reference of the word “accused.”

Furthermore, with respect to CBCNews.ca’s and The National’s March 21 reports, both were marred as they failed to mention that the eight-month jail sentence includes time already served since her incarceration in December 2017. Tamimi is slated to be released in August and this fact should be acknowledged by the CBC.

Failing which, viewers and readers will wrongly conclude that Tamimi is set to be released on November 21 vs. the slated release date of August 21.

On March 26, HRC received a response from Jack Nagler, the CBC’s Director of Journalistic Public Accountability and Engagement who said that no corrective action is required by the CBC. In a correspondence sent to HRC Executive Director Mike Fegelman, Mr. Nagler stated the following:

… there are certain extra steps we take when covering a trial. We often describe the accused as… “the accused”… even if there is no particular dispute about the core facts of a case. That is nothing more than respect for the judicial process, be it here or in Israel. This was the case in the article about the trial’s beginning. And it continued to apply in our story about the sentencing deal. As you see in the headline, this story was not based on an official announcement, but on a report that had appeared in Haaretz. We were not yet at a point where we knew conclusively that the trial was over. So we remained prudent in our choice of language. Now that we all know the sentencing report did in fact happen, you can expect to see different language used in future stories on Tamimi.”

As we told the CBC, we will have to agree to disagree on this matter. You only get jail time for a conviction, not an accusation. Tamimi is not the accused, she’s the convicted assaulter. The CBC’s March 21 report should have been aware of the sentencing report and hence, the CBC’s headline should not have used the word “accused”. Lastly, while we appreciate that CBC promises to use different language in future stories about Tamimi, the CBC failed to take any remedial action for its failure to note that Tamimi’s 8-month jail sentence includes time already served.

We will continue to monitor the CBC’s coverage of this issue and take action when necessary.