I am writing to bring our concerns to your attention regarding a Derek Stoffel report published today entitled:  “Meet 17-year-old Ahed Tamimi, the new face of Palestinian resistance” (emphasis added) and his CBC Radio and CBC National report also broadcast today. 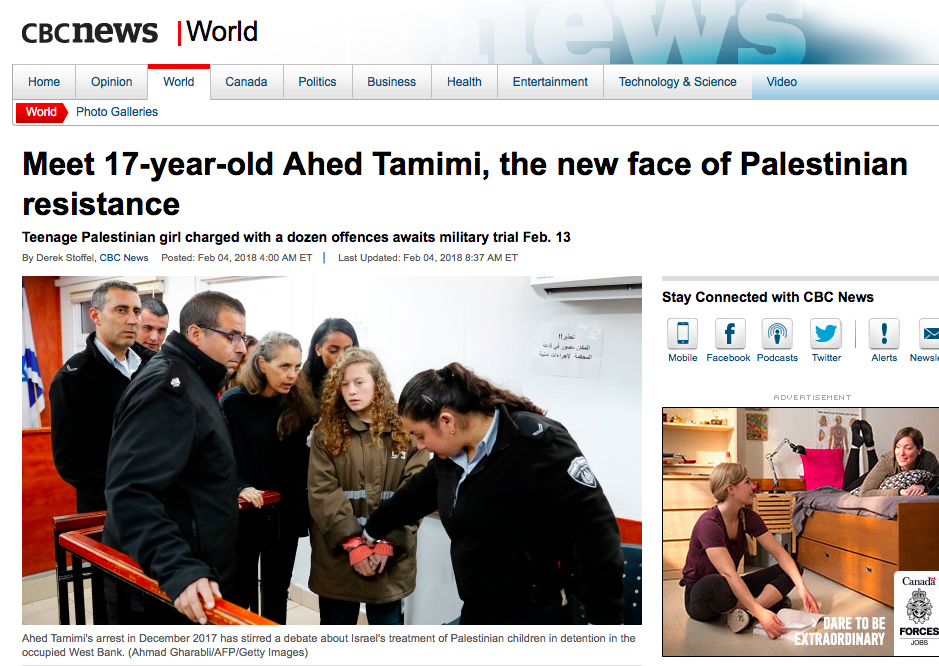 In the lead of his CBCNews.ca report, Mr. Stoffel writes: “To Palestinians and their supporters, hers is the face of a hero, a new symbol of resistance. But many Israelis call 17-year-old Ahed Tamimi “Shirley Temper” after viewing videos showing the girl angrily lashing out at Israeli soldiers.” (emphasis added)

In the body of his report, Mr. Stoffel writes:

“The Tamimi family is well known in international circles that support Palestinian resistance to the Israeli occupation, which has spanned half a century. The Tamimis are usually out on the hilly roads of Nabi Saleh for Friday protests against the Israeli settlement of Halamish, a mere 500 metres away. Those demonstrations frequently end in clashes between the protesters and Israeli security forces.” (emphasis added)

“Asked about his daughter’s starring role in the resistance movement, Tamimi said that he feels “proud.”” (emphasis added)

CBC National anchor Adrienne Arsenault also claimed that Ahed Tamimi has a “resume as a resistance icon…” (Watch the CBC National report by clicking immediately below.) 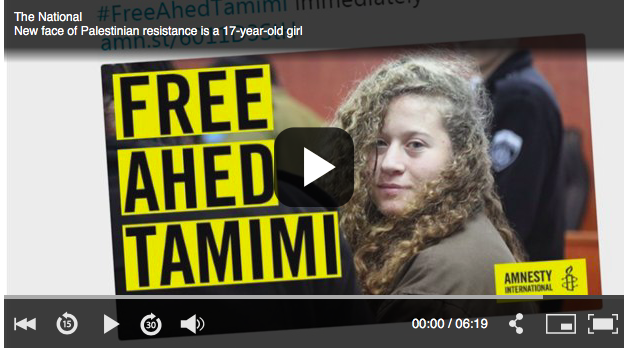 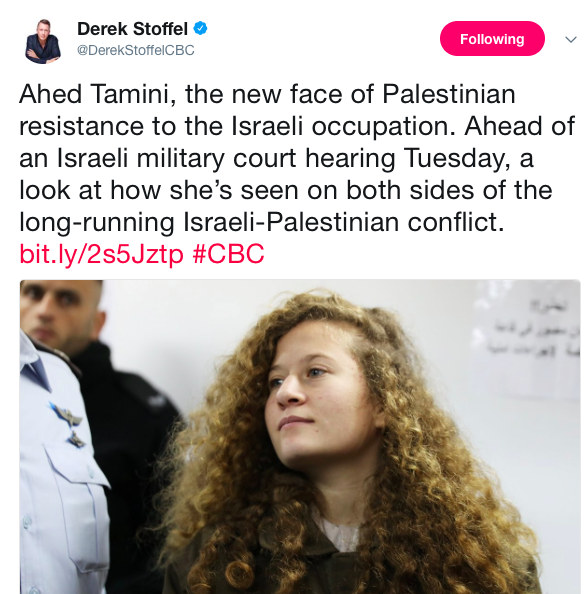 The term “resistance” is a commonly-used Palestinian euphemism for attacking Israelis, often civilians, in events such as suicide bombings, rocket attacks, shootings, stabbings, and restaurant explosions.

We strongly take issue with the CBC’s appropriation of this Palestinian term into your journalist’s official lexicon. The offhanded nature of Mr. Stoffel’s remarks implied that “resistance” was legitimate.

Mr. Stoffel’s use of this term is not in attribution and as he himself observes, it’s the Palestinians who see her as a “new symbol of resistance,” or as described by her father Bassem, a “freedom fighter”. Palestinians are entitled to their opinions, but why is the CBC’s journalist claiming that Tamimi is part of the “resistance” movement? This term is highly prejudicial, not neutral and certainly not objective. Mr. Stoffel himself observes: “The long-running Israeli-Palestinian conflict has always been about competing narratives,” so why is he adopting the Palestinian narrative?

Stoffel writes that: “The Tamimi family is well known in international circles that support Palestinian resistance to the Israeli occupation, which has spanned half a century…” Regrettably, he fails to mention that Tamimi herself comes from a family of notorious Palestinian terrorists. Ahed’s aunt, Ahlam Tamimi, murdered 15 Israelis, (half were children) as a suicide bomber at the Sbarro pizzeria. She was just 20-years-old when she carried out this odious terror attack in Israel. Meanwhile, Ahed’s mother, Nariman, regularly incites terrorism against Israeli Jews on social media. Nariman spends her time by educating Palestinians on the best place on the body to stab Israeli Jews. Though parents are tasked to safeguard their children and not put them in the path of potential danger and yet, Ahed’s Father, Bassem, indoctrinates his daughter to be on the front lines, a would-be “martyr” for the Palestinian cause.

Furthermore, Mr. Stoffel ignores the role of Palestinian families in inciting and putting their kids on the front lines facing violence, instead of teaching kids peace.

With respect to the incarceration of Palestinian teenagers, Mr. Stoffel ignores how Palestinian leaders who incite their kids to throw molotov cocktails and rocks at Israelis (civilians or soldiers alike) aren’t apprehended and imprisoned by Palestinian police. Importantly, an Israeli four-year-old, Adele Biton, was killed when the car driven by her mother was struck by a barrage of stones thrown by Palestinians on March 14, 2013. If Canadian teenagers punched Canadian soldiers or threw rocks at motorists causing fatalities, they would be dealt with in full accordance with the law.

“Ahed’s arrest has also shone a spotlight on Israel’s treatment of Palestinian children in the occupied West Bank. The advocacy group Defense for Children International Palestine estimated that about 375 young Palestinians between the ages of 12 and 17 were detained by Israel’s military in 2016, often for throwing stones.”

“Military Court Watch, an NGO in the West Bank, studied the arrests of 127 Palestinian children and found that in 98 per cent of cases, the detentions occurred near Israeli settlements, which most nations, including Canada, view as illegal under international law, although Israel disputes this.”

“If the politicians in Israel decide to put 400,000 Israeli civilians into the West Bank,” said Military Court Watch co-founder Gerard Horton, “and you give the job to the military of guaranteeing their protection, then the tactics employed by the military generally include suppressing and intimidating the villagers living next to those settlements.””

Importantly, Mr. Stoffel does not include a quote from an official Israeli source to answer to these serious allegations, nor is any context given about the credibility (or lack thereof) of these highly political NGO’s. 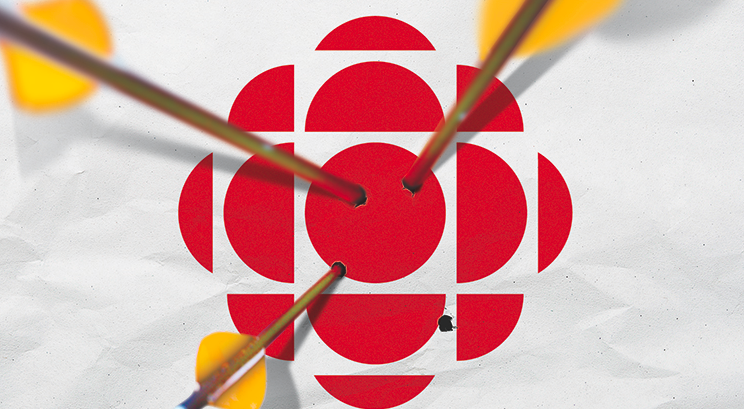 NGO Monitor has exposed the anti-Israel biases and faulty methodologies of Defense for Children International and Military Court Watch (MCW) challenging their methodologies, biases, and agendas. And yet, CBC Reporter Stoffel takes their claims at face value.

In short, Mr. Stoffel’s report was unfair, biased and stood in violation with CBC’s Journalistic Standards and Practices. We ask for immediate corrective action to be undertaken.

We look forward to your reply.