You can’t find a better example of Israel’s commitment to entrenching and promoting minority rights than Yousef Jabareen. 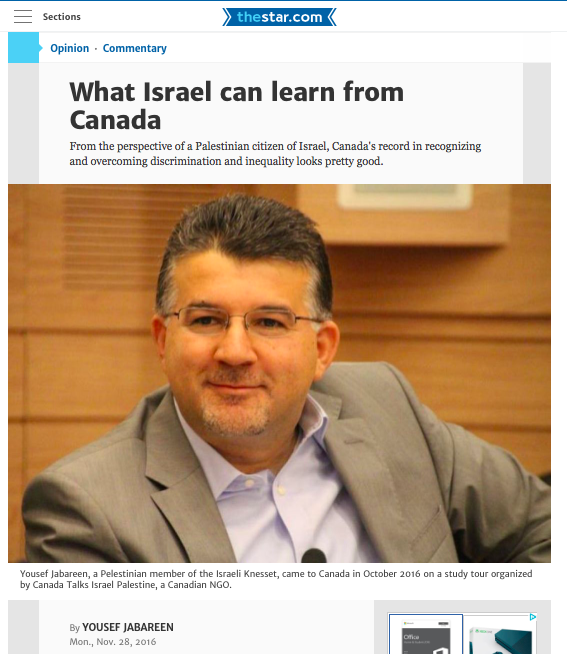 And yet, an op-ed published in the Toronto Star on November 28, saw Jabareen imply (without foundation) that Israel is a country with institutional racism.

According to Jabareen: “We (Arab-Israelis) make up about one-fifth of the country’s population today, but we have been excluded from the centres of powers in Israel… Systemic discrimination against Israel’s Palestinian citizens is very widespread and too often condoned by the legal system.”

Is Israel perfect? No, far from it and more must be done to promote Arab minority rights, but we should not be obtuse to how Israel is the only liberal democracy in the Middle East in which its 20% Arab minority enjoys full equal rights before and under the law. Israeli Arabs consistently affirm they would rather live in Israel as a minority than anywhere else in the Middle East as part of the majority. Israel’s vibrancy, its openness, and tolerance have solidified its credentials as a progressive liberal democracy whose Arab minority not only enjoys the same rights as all other Israeli citizens, they occupy positions at the pinnacle of Israeli society. Arabs sit on Israel’s Supreme Court, have been elected to Israel’s parliament, they fight in the Israel Defense Forces and partake in every facet of Israeli society.

If you’re looking for institutional racism, go next door to the Palestinian territories where Palestinian President Mahmoud Abbas has always asserted that a future Palestinian state must be “Judenrein” (a land without Jews).