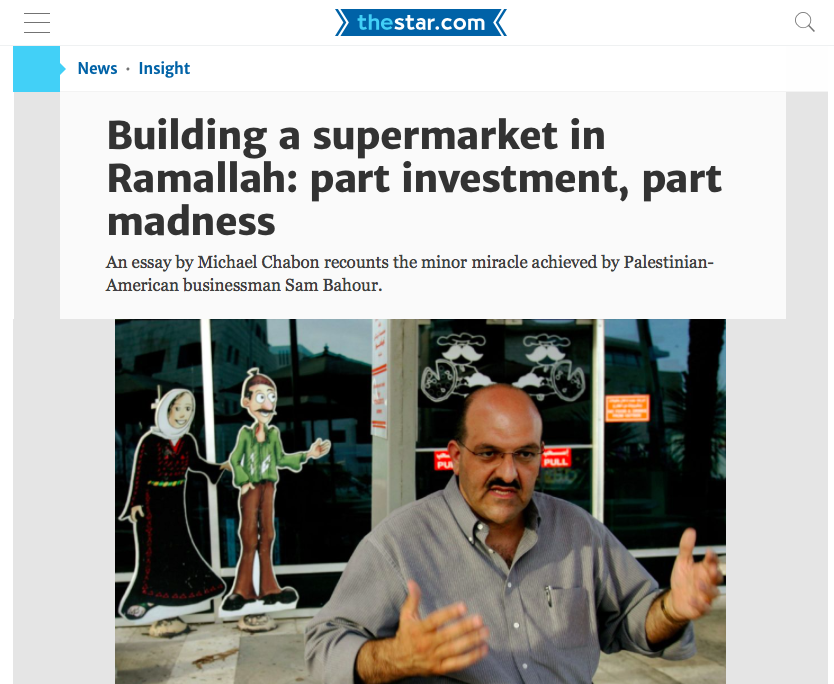 On May 27, the Toronto Star published a lengthy excerpt from a book by Michael Chabon which was highly critical of Israel. The book is entitled “Kingdom of Olives and Ash”.

HonestReporting Canada’s (HRC) main concern with the excerpt was that the New York Times notes that an anti-Israel political advocacy organization known as Breaking The Silence (BTS) funded the travel costs and co-produced the book as a joint initiative between the parties. As the Times noted:

“The editors of the book, the authors Michael Chabon and Ayelet Waldman, have worked with a number of individuals and organizations within Israel on this project. Among them is Breaking the Silence, which helped to administer some of those travel costs in the region, and which also made additional general contributions toward travel costs for Chabon and Waldman’s project.”

We told the Star that it was a serious journalistic transgression to not disclose this on the onset and we felt it was incumbent upon the Star to now disclose this information.

In fact, Amazon.com’s own listing of the book (emphasis added) says the following: “In Kingdom of Olives and Ash, Michael Chabon and Ayelet Waldman, two of today’s most renowned novelists and essayists, have teamed up with the Israeli NGO Breaking the Silence—an organization comprised of former Israeli soldiers who served in the occupied territories and saw firsthand the injustice there—and a host of illustrious writers to tell the stories of the people on the ground in the contested territories.”

Chabon’s excerpt published by the Star was particularly critical of Israel’s military efforts in the west bank and his contention that these efforts impede progress in developing Palestinian business and infrastructure there. Not surprisingly, there was no mention of Israel’s security concerns when faced with unrelenting Palestinian terror.

As the New York Times Public Editor asserted on the topic: “… the wiser choice would have been to make clear the role of Breaking the Silence in the project. Disclosure ahead of time is better than questions afterward.”

Without mention of this information, the Star was de facto promoting a political agenda by neglecting to expose the bias underlying Chabon’s observations.

Secondly, we told the Star that it would have been only appropriate for the Star to have acknowledged Israel’s concerns with BTS and its “radical” agenda, and what Israel considers its biased and flawed methodology as it relies on anonymous witnesses who make unsubstantiated allegations that Israel is committing “war crimes”.

From our perspective, the Star is perfectly entitled to have published Chabon’s excerpt, but we argued that it should have disclosed BTS’ role in co-producing and underwriting costs for the book in advance.

After liaising with the Toronto Star, on June 3, the Star’s Public Editor, Kathy English, issued the following clarification for publishing a book excerpt which was highly critical of Israel without acknowledging that Breaking the Silence had co-produced and had underwritten various costs associated with developing the book: 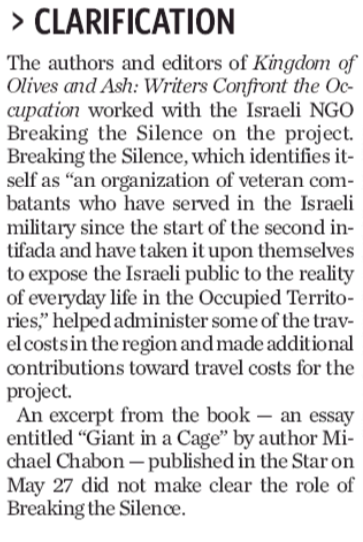 Another Canadian media outlet, Maclean’s Magazine, also failed to disclose BTS’s role in co-producing the book and administering various costs for the book’s authors. Brian Bethune’s May 10th report only acknowledged that the writers worked with BTS. Maclean’s had also published a lengthy excerpt from Madeline Thien entitled “The Land in Winter” which was also very critical of Israel. Again, there was no disclosure of BTS’ role by Maclean’s. HRC communicated our concerns with Mr. Bethune and Maclean’s Editor-in-Chief Alison Uncles on the matter and we take note that the Thien excerpt is no longer on the Maclean’s website:

On another matter, Maclean’s did also publish the following correction notice following our complaint to set the record straight about the number of settlement homes which were retroactively legalized by the Israeli Knesset:

Maclean’s claims that “Madeleine Thien’s essay, The Land in Winter, has been removed from Macleans.ca in accord with Maclean’s original agreement with the author for a limited-time right of publication.”