Human Rights Watch (HRW) has been long criticized for its faulty methodology and anti-Israel biases. This week’s release of yet another HRW report condemning Israel for alleged “war crimes” was just another example of HRW’s gratuitous gang up on the Jewish state.

As NGO Monitor President Gerald M. Steinberg described: “Human Rights Watch has a long history of false accusations targeting Israel, and this pseudo-report adds to the collection… Following the standard pattern, the war crimes of Hamas are largely ignored; identification of Palestinian casualties as ‘civilian’ and victims of Israeli responses are unsubstantiated; ‘testimonies’ from Palestinians in Gaza cannot be verified, and references to international law are invented or distorted.”

On July 27, the Toronto Star devoted coverage of the HRW report on its website featuring the following headline that we took issue with: “Human Rights Watch: Israeli war crimes apparent in Gaza war”

Simply put, while the HRW report singled out Israel for opprobrium, it also featured a brief accusation that Hamas committed war crimes for its firing 4,000+ rockets indiscriminately at Israel, but this headline only focuses on HRW’s allegations against Israel. Of course, Israel strenuously disputes HRW’s accusations.

In the interests of fairness and accuracy, we asked the Star to amend this headline to note that HRW also claims Hamas committed war crimes.

We are pleased that the Star amended the headline to the following: “Human Rights Watch: war crimes apparent in Gaza war”.

A before and after comparison can be seen below: 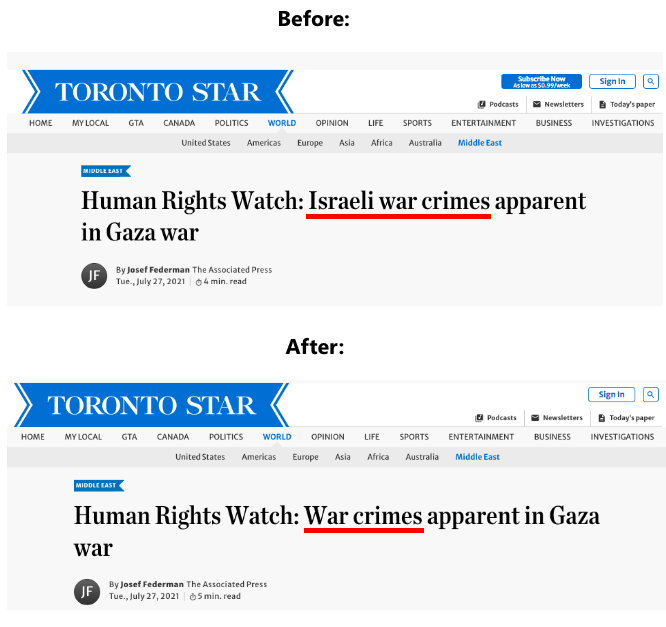