After liaising with senior editors at the Journal Pioneer newspaper recently, the following correction was issued today to retract a letter writer’s attributing a fake antisemitic quote to Albert Einstein: 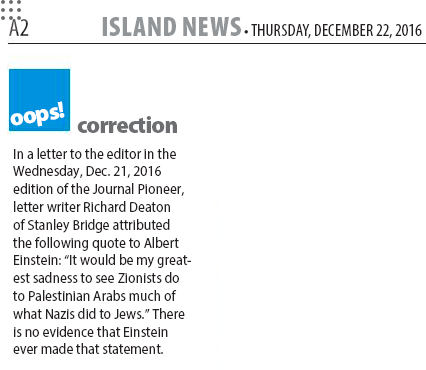 On December 21 in the Journal Pioneer, a P.E.I. based newspaper, a letter writer named Richard Deaton claimed that Albert Einstein made the following statement: “It would be my greatest sadness to see Zionists do to Palestinians …what the Nazis did to [the] Jews.”

In truth, there’s no evidence to confirm the veracity that Einstein ever made this statement that was wrongly attributed to him. As we told the Journal Pioneer, unless Mr. Deaton can substantiate with verifiable evidence/sourcing that Einstein made this statement, a retraction should be published. Additionally, Mr. Deaton’s bringing up this alleged quote is tantamount to antisemitism as according to the Ottawa Protocol and U.S. State Department, when you draw comparisons of contemporary Israeli policy to that of the Nazis, you are making an antisemitic statement.

HonestReporting Canada is pleased to inform its members that the Journal Pioneer promptly and professionally acted to remedy the situation by immediately amending the letter, thereby removing this reference and by publishing this correction notice.

We thank Brad Works, Managing Editor at the Journal Pioneer – a newspaper of Transcontinental Media – for his cooperation.