The Hezbollah Threat to Israel: The Real Story...
Israel Is An Imperfect Country, But A Vibrant...
Why Are Anti-Israel Activists So Afraid of The...
McGill Tribune Publishes Op-Ed Calling for a Boycott...
Ontario Arabic Paper’s Editor Downplays Holocaust; Meshwar Describes...
How the War in Ukraine is Having a...
Toronto Star Columnist Shree Paradkar Wrongly Claims IHRA...
After Vancouver Adopts IHRA, CBC Radio Interviews Fringe...
Qatar Prepares For The 2022 World Cup: Will...
Lawfare: Who is Using the Law More Effectively?...
Home Daily Brief UPDATED: HRC Op-Ed In Lethbridge Herald: Comparing Jews to Nazis Antisemitic

On October 18, the Lethbridge Herald issued the following correction: 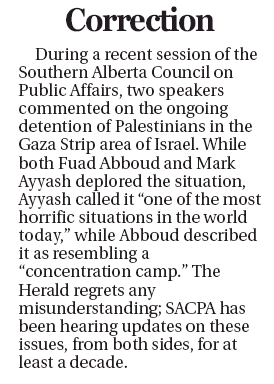 In light of the Lethbridge Herald’s correction, HRC has amended our commentary per below.

In an op-ed published in the Lethbridge Herald today, HRC Executive Director Mike Fegelman condemned the attempts of retired lawyer Fuad Abboud, who compared Jews to the Nazis claiming that Israel puts Palestinians in prison camps with “concentration camp-like conditions”. This repugnant claim is antisemitic and it fans the flames of hatred.

According to the Lethbridge Herald’s Dave Mabell, retired lawyer Fuad Abboud outrageously linked the situation in the Palestinian territories to the suffering that Jews endured in concentration camps. His statements were allegedly made in an address to the Southern Alberta Council on Public Affairs (SACPA) on Oct. 11.

In referring to a fictional “Gaza prison camp, where Israeli officials are said to be holding Palestinians in concentration camp-like conditions,” Abboud trumped up libelous claims that Jews – who were once the victims of the Nazis in the Holocaust that saw the murder of six million Jews – are now the victimizers carrying out a genocide of Palestinians. It should be noted that comparisons of contemporary Israeli policy and actions to that of the Nazis fits the European Union’s, U.S. State Department’s and Canada’s Ottawa Protocol’s working definition of anti-Semitism.

As Deborah Lipstadt, professor of Modern Jewish and Holocaust Studies at the Institute for Jewish Studies at Emory University noted, comparing “Jews to Nazis is not only ill-informed, it demonstrates a certain prejudice – anti-Semitism – which will never help resolve the situation. Whatever one thinks of Israeli policy, to describe it as akin to the Nazi policy of murdering all of European Jewry is to engage in anti-Semitism and a form of Holocaust denial.”

Furthermore, make no mistake, Jews are the indigenous people of the land of Israel and have lived there, uninterrupted, for over 3,000 years. The dream of a Jewish state is the essence of Zionism, a movement founded by Theodore Herzl which preceded the Holocaust.

It’s troubling to note that it was just last year that the Lethbridge Herald reported that Israel’s very existence and the removal of the world’s only Jewish state was openly discussed as a potential solution to the Mideast’s problems at another SACPA event. Mohammed Abushaban, a Palestinian-Canadian interpreter, reportedly described the mere existence of Israel as a constant source of instability requiring rectification at that event.

In back-to-back years, comments made by speakers at SACPA events have fanned the flames of hatred against the Jewish community of Canada and supporters of Israel.