HRC In Hill Times: “Israel and Jewish People Have Legitimate Claims to Judea and Samaria”

In the Hill Times on December 2, and the Guardian and Pioneer Journal on December 6, HRC Research Analyst Noah Lewis took commentator Gwynne Dyer to task for denying the Jewish people’s legal rights to Judea and Samaria. 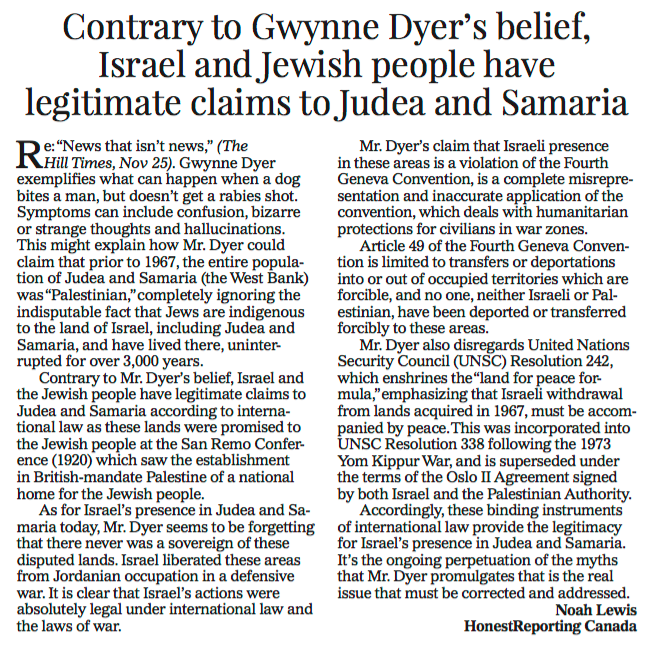 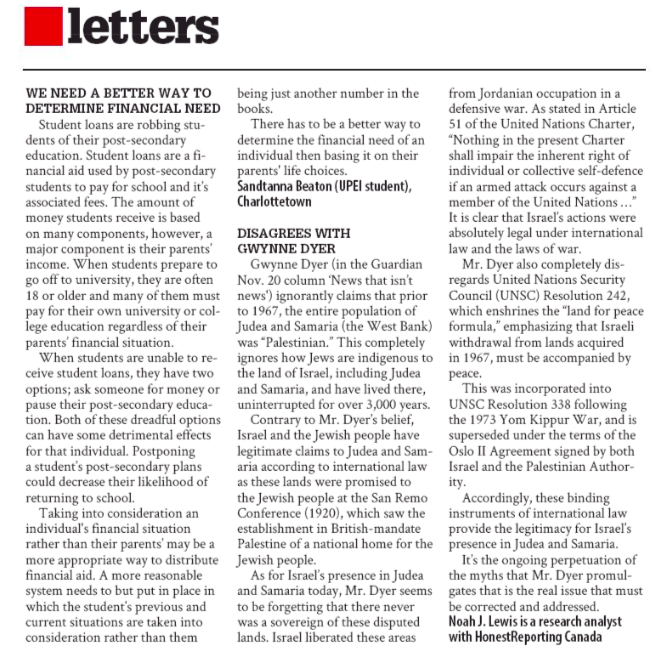 Re: “News that isn’t news,” (The Hill Times, Nov 25). Gwynne Dyer exemplifies what can happen when a dog bites a man, but doesn’t get a rabies shot. Symptoms can include confusion, bizarre or strange thoughts and hallucinations. This might explain how Mr. Dyer could claim that prior to 1967, the entire population of Judea and Samaria (the West Bank) was “Palestinian,” completely ignoring the indisputable fact that Jews are indigenous to the land of Israel, including Judea and Samaria, and have lived there, uninterrupted for over 3,000 years.

Contrary to Mr. Dyer’s belief, Israel and the Jewish people have legitimate claims to Judea and Samaria according to international law as these lands were promised to the Jewish people at the San Remo Conference (1920) which saw the establishment in British-mandate Palestine of a national home for the Jewish people.

As for Israel’s presence in Judea and Samaria today, Mr. Dyer seems to be forgetting that there never was a sovereign of these disputed lands. Israel liberated these areas from Jordanian occupation in a defensive war. As stated in Article 51 of the United Nations Charter, “Nothing in the present Charter shall impair the inherent right of individual or collective self-defence if an armed attack occurs against a Member of the United Nations…” It is clear that Israel’s actions were absolutely legal under international law and the laws of war.

Mr. Dyer’s claim that Israeli—more specifically Jewish—presence in these areas is a violation of the Fourth Geneva Convention, is a complete misrepresentation and inaccurate application of the Convention, which deals with humanitarian protections for civilians in war zones.

Article 49 of the Fourth Geneva Convention is limited to transfers or deportations into or out of occupied territories which are forcible, and no one, neither Israeli or Palestinian, have been deported or transferred forcibly to these areas. Furthermore, there is no element of international law that can be used to prohibit the voluntary return of individuals to the towns and villages from which they or their ancestors had been previously evicted by forcible means.

Mr. Dyer also completely disregards United Nations Security Council (UNSC) Resolution 242, which enshrines the “land for peace formula,” emphasizing that Israeli withdrawal from lands acquired in 1967, must be accompanied by peace. This was incorporated into UNSC Resolution 338 following the 1973 Yom Kippur War, and is superseded under the terms of the Oslo II Agreement signed by both Israel and the Palestinian Authority.

Accordingly, these binding instruments of international law provide the legitimacy for Israel’s presence in Judea and Samaria. It’s the ongoing perpetuation of the myths that Mr. Dyer promulgates that is the real issue that must be corrected and addressed.