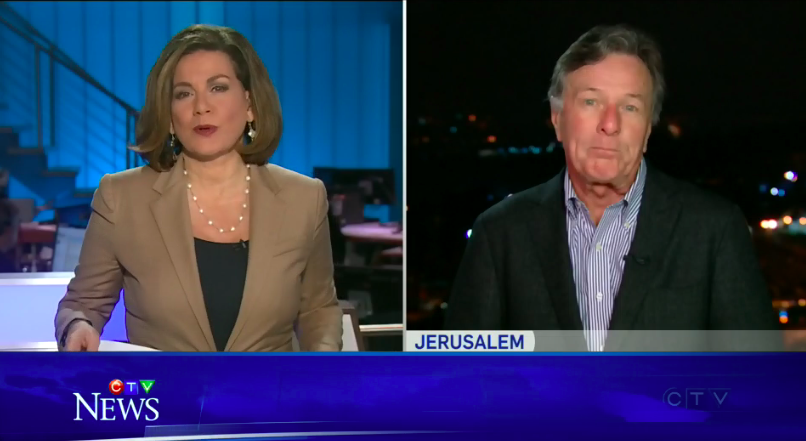 “A potentially enlightening CTV National television report about Ma’ale Adumim ends up twisted into an anti-Israel diatribe; it wasn’t the beauty they came to see, it was lies they hoped to spread.”

Those are the words of Paula Stern, CEO of WritePoint Ltd., a leading technical writing company in Israel. Paula lives in M’aale Adumim and writes a personal blog called: A Soldier’s Mother.

In mid-February, CTV News dispatched veteran reporter Paul Workman to work from Israel for a couple days where he interviewed Ms. Stern and covered Ma’ale Adumim, described by Jewish Virtual Library (JVL) as: “a suburb of Israel’s capital, barely three miles outside Jerusalem’s city limits, a ten-minute drive away.”

You can watch the CTV News report at the following link or as embedded in the video below:

“In 1991, the government declared Ma’ale Adumim the first official city in Judea and Samaria, and today it is the largest Jewish city in the territories, with a population of 40,000. Most of the city’s residents are middle class and traditional; approximately 20 percent are religious (and are served by 28 synagogues).”

“According to the Clinton peace plan, Ma’ale Adumim was to be part of Israel – a point agreed upon by the Palestinian Authority – and the city no lies within the Israeli side of the security fence. For many years, the Israeli government has planned to fill in the gap between Jerusalem and Ma’ale Adumim – referred to as the E1 project – by building in the East-1 (E1) corridor that lies between the two cities. Comprising approximately 3,250 mostly uninhabited acres, the E1 plan calls for the construction of residential homes, commercial, industrial, and tourism buildings, as well as a nature reserve.”

In conversation with HonestReporting Canada, Ms. Stern says that “If you watch the interview  – there are some outright lies, but more importantly, there was blatant omissions – intentional, without question.”

In his report, Workman disguised his opinion as news by claiming that Stern is (emphasis added) “an uncompromising Jewish settler living on occupied west bank land” that Workman claims “clearly is in contravention of international law.” No mention was made that Israel strenuously disputes this. As well, Ms. Stern contends that she was misrepresented as she claims that she naturally envisions a final peace accord that can only come about through compromise and negotiations. 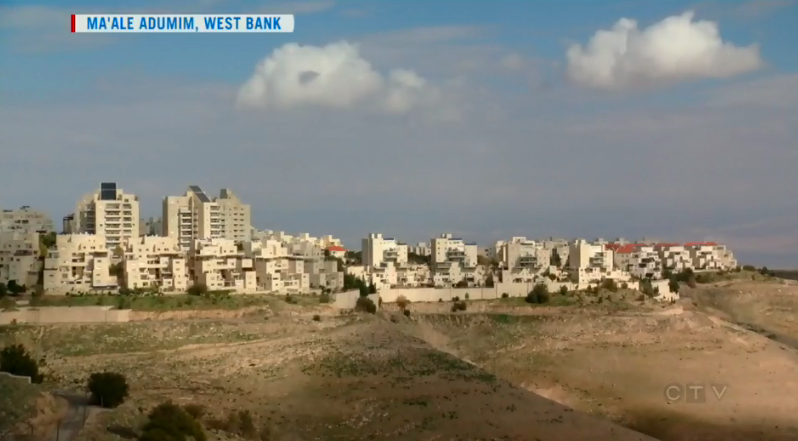 Workman says that the “real goal” is to “annex” the area making it part of Israel, however, Ms. Stern argues that: “Actually, what is on the table is sovereignty and applying civil law to Israeli civilians, something 88% of Israelis agree with, according to the survey cited above. My city is solidly within the Israeli consensus, not controversial.”

Workman asks Stern: “So you will never accept that this is Palestinian land, ever?” and Ms. Stern responded by saying “no, absolutely not. Why should I?”

Of course, Palestinians have never been sovereign rulers over the land and Workman himself said that the land was “seized from Jordan” (who had taken the land in the 1948 War of Independence.) Israel captured the west bank and east Jerusalem from Jordan in 1967 in a war of self defence to which it implored Jordan not to attack. While Palestinian and Israeli advocates may stake claim to these lands, CTV should report objectively on the dispute and not take sides. Simply put, Mr. Workman should have said “Palestinian claimed land”, just as these reports in the New York Times did (see here and here). CTV’s reporter used tendentious language instead of using objective and impartial descriptions by referring to these lands as being inherently disputed. Accordingly, by assigning these lands to one side of the conflict, fundamentally disregards that both parties have signed international agreements which deem that the status of the land is to be resolved pending negotiations. 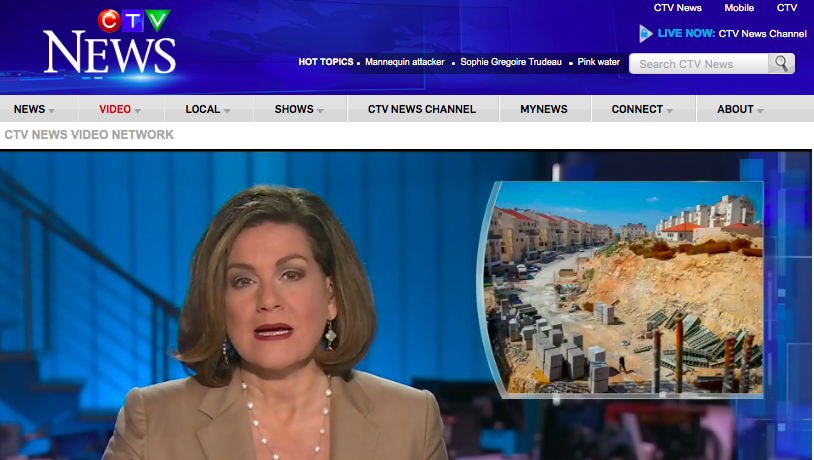 Writing in IsraelyCool website on March 8, Paula Stern also criticized CTV for being “guilt of picture abuse”. She writes:

“In the opening remarks made by their well-known broadcaster, a picture was displayed (see image right). From the start, I knew it was not anything I had shown them and I was pretty sure it wasn’t even Maale Adumim. That little picture up on the right bothered me for days. Finally, I opened Google and searched “Israeli settlements”. “How obvious,” I thought, “how amazingly pathetic.” Within a second I found the picture. Not surprisingly, it wasn’t taken in Ma’ale Adumim, but in Modi’in Illit – some 50 kilometers away. Not surprisingly, it wasn’t taken in 2017…or 2016…or 2015, or 2014, or 2013, and not even in 2012.”

This report in the Christian Science Monitor confirms that this photo was from 2011 and shows Mod’in Illit.

In correspondence with HRC, Stern said the following about CTV’s report:

“In four hours of showing them Maale Adumim, I was very careful to show them the scope and width of the city – they ignored this entirely. At one point, Paul asked me, “you call this a city?” because he kept calling it a settlement. I informed him that the government of Israel calls Maale Adumim a city and it achieved city status well over a decade ago (I believe, I told him, even 20 years ago) and then showed him the mall, museum, music conservatory, theater, emergency services center (treating Arabs and Jews), etc. etc.

At one point, he patronizingly referred to it as a “little city” – but all the other times it was “settlement.” What he did was allow me one small sentence and then cut out the next several minutes which explained. For example – I told him people in Tel Aviv were settlers; asked him where he lived and then told him he was a settler of London and that we are all settlers – in that we settle the place we call home. He didn’t like that, clearly.

I outright explained the history of the area – that Israel had pre-emptively attacked Egypt and Syria in 1967 and sent a clear message to Jordan that we would NOT attack them. In response, THEY chose to attack Israel, and lost. We didn’t SEIZE the land (specific word he used) but won it in a battle that we didn’t start. I detailed Ottoman, British, etc. etc. – he ignored that entire segment, and said we seized the land – that is a clear and inaccurate accusation that is false.

On a personal level, he said I was an “uncompromising settler” – when in fact, he asked me if I believed Israel should negotiate and I said yes – anytime, anywhere, etc. Again, a blatant and intentional inaccuracy.

They focused on wanting to show “expansion” – and connecting it to Trump. I showed them – in the distance (which they then on their own insisted on filming up close) the NINE buildings that we started building about a year ago…that were approved more than 5 years ago and represent pretty much the ONLY building happening in Maale Adumim and have nothing to do with Trump.

I plan to address this on various outlets (IsraellyCool and A Soldier’s Mother – my blog). I hope Honest Reporting will get involved as well and I’d be happy to participate in any way needed. To be honest, I’m surprised to find that BBC was more reasonable in a show I did for Panorama, than CTV. They, at least, were balanced and showed whole clips. This was a clear and blatant manipulation – Workman clearly didn’t like what I had to say – because I wasn’t extremist and I explained. He kept saying I was being “evasive” – because I didn’t feed him the lines he wanted.

He took the cowardly way…the lazy way…of using an intro subject with the commentary he’d obviously planned regardless of the facts on the ground.”

You can read Ms. Stern’s full critique of Paul Workman and CTV’s report in her commentary entitled: “CTV and the ‘Uncontrolled Pen’ Against Israel”.

At present, a complaint has been filed with CTV News President Wendy Freeman by HRC and one of our subscribers through the Canadian Broadcast Standards Council (CBSC). We will keep you updated about the outcome of this complaint.