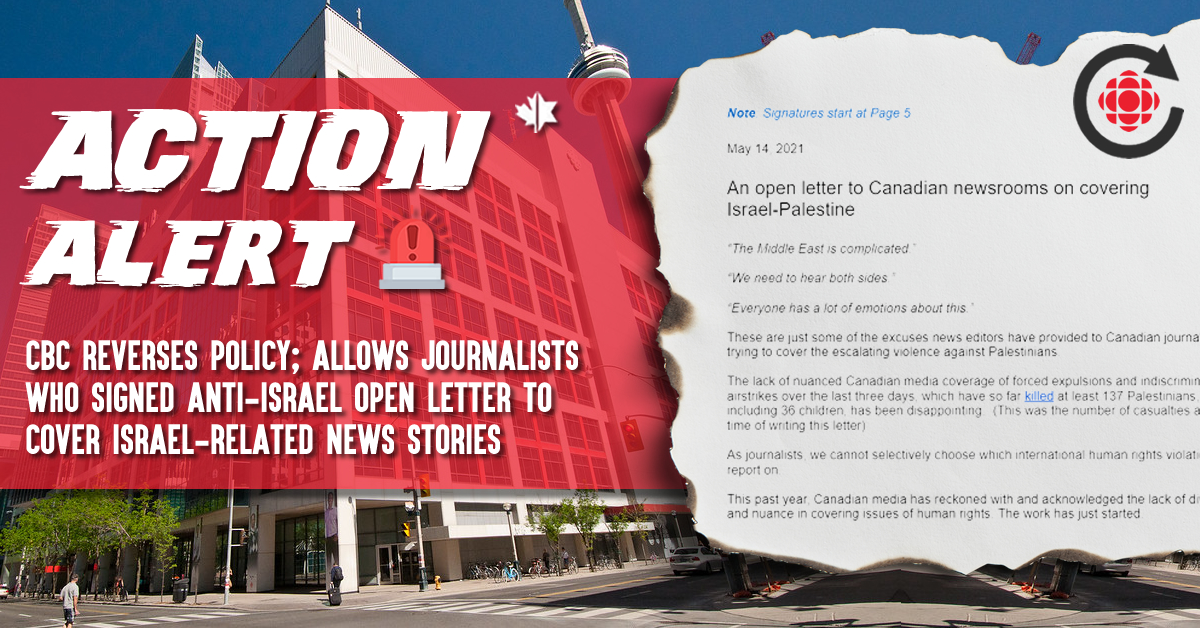 In May of 2021, in the midst of the Hamas terrorist war against Israel, more than 2,000 individuals, including many Canadian journalists, added their names to an anti-Israel open letter entitled: “An open letter to Canadian newsrooms on covering Israel-Palestine,” which was blatantly one-sided, pro-Palestinian and which provided an overly simplistic depiction of events in the Middle East.

The anonymously-written letter falsely claimed that Israel was conducting “escalating violence against Palestinians,” including carrying out “indiscriminate airstrikes,” and that there is a “deep reluctance (by Canadian journalists) to cover the ongoing nature of the Israeli occupation.” The anti-Israel letter and its corresponding advocacy campaign, ignored how Palestinian terrorists initiated violence and at the time, had fired several thousands of rockets at Israeli civilians. The letter forcefully implied that Israel is committing “grave breach(es) of international law” and “ethnic cleansing.”

“We have had conversations with each of the journalists who signed the open letter to better understand their thinking and to help them understand the impact and implications of their actions. The open letter they signed asks for more nuanced journalism and more perspectives in the media’s coverage of the Middle East — an objective we endorse.

However, the letter goes further to state that our journalism must be rooted in a specific position on this conflict. That’s not tenable for a news organization. As the public broadcaster, our mission is to provide a broad range of voices and perspectives. To offer Canadians context on complicated issues. We aim to be accurate, fair and balanced in our coverage.

By adding their names, the CBC journalists who signed the open letter have taken a public stand on this story. That has created the perception of a conflict of interest among some members of our audience. We will provide oversight and ensure editorial distance between those who signed the letter and our daily coverage for the near future. This is standard. No one is being disciplined for signing the letter, and no stories are being dropped. We welcome all viewpoints at our editorial story meetings. That only serves to deepen and enrich our storytelling.”

This was a correct, if only, a modest step by the CBC to take. Clearly, members of the journalism profession who sign their names to an advocacy petition which made brazen and false claims against Israel, should not be allowed to cover Israel-related news stories as their integrity has been compromised and as they lack political neutrality.

Alarmingly, CBC recently disclosed to HonestReporting Canada that it has reversed its decision.

In April 2022, HonestReporting Canada sent a letter to CBC News regarding a problematic article appearing on CBC News’ 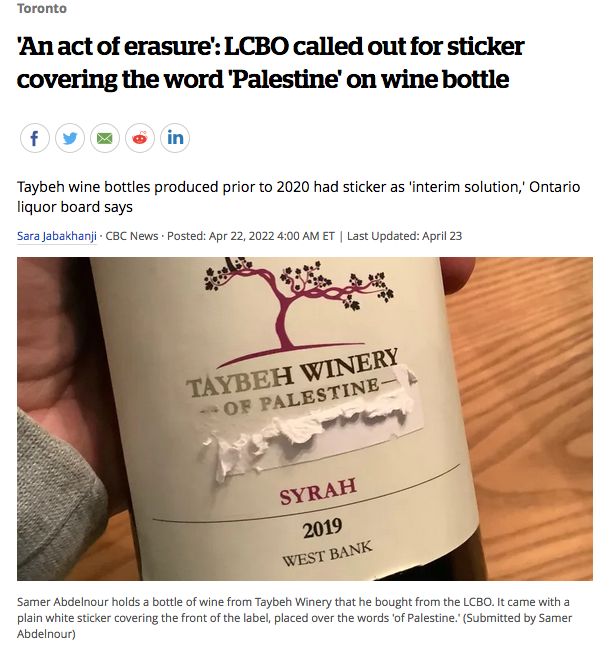 website entitled “‘An act of erasure’: LCBO called out for sticker covering the word ‘Palestine’ on wine bottle,” which was written by Sara Jabakhanji, a signatory to the 2021 letter, in what we regard as a clear contravention of CBC’s rule.

Ms. Jabakhanji’s article was marred as it omitted mentioning how “Palestine” is not a country and that the Palestinians don’t have statehood, nor were any pro-Israel sources cited about the “West Bank” labelling issue. The CBC story itself was not newsworthy, nor was it time-sensitive. It also featured this quote which denied 3,000 years of Jewish indigeneity in the land of Israel: “It really reflects a deep settler-colonial insecurity when even mentioning Palestine is deemed a threat.”

In response to HonestReporting Canada’s complaint, George Achi, CBC’s Director of Journalistic Standards, acknowledged that the restriction had been reversed and defended the change, writing in an email to HRC that (emphasis added):

“…CBC News ensured, for a certain time, editorial distance between reporters who had signed the letter and coverage related to the specific stance taken in that letter. This doesn’t mean that we banned anyone from covering the Middle East eternally. As you know, our reporters are experienced professionals whose work is heavily vetted by a team of equally conscientious producers. A story is not one person’s work: our system ensures that the same standards are applied across the board and that errors, while rare, are corrected promptly.”

This is a very worrying reversal. As Thompson rightly pointed out in his 2021 email, journalists who signed the one-sided letter against Israel created “the perception of a conflict of interest.” This fact is as true today as it was in the Spring of 2021, during the height of the Hamas-Israel conflict. A journalist who added their name to such a letter was publicly standing behind an advocacy campaign and its letter which was riddled with falsehoods against Israel. When these journalists report on news stories related to Israel, their ability to provide coverage without bias is impossible.

This position is laid out by CBC itself, in its Journalistic Standards and Practices, which stipulates: “We are guided by the principle of impartiality… CBC journalists do not express their own personal opinion because it affects the perception of impartiality and could affect an open and honest exploration of the issue.”

In another violation of the CBC’s rule, on May 20, CBC broadcast and published a podcast by Host Tamara Khandacker 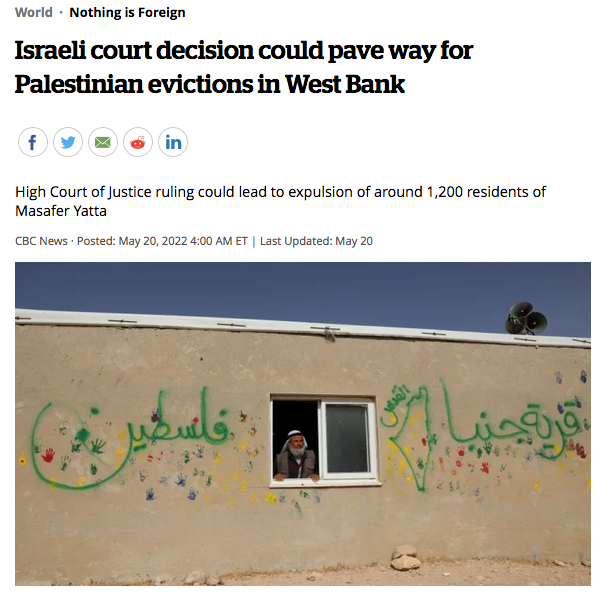 Like Ms. Jabakhanji, Tamara Khandacker also signed this anti-Israel open letter while she was at the Globe and Mail. As well, this CBC podcast’s producer, Adrian Cheung, is also a signatory.

The CBC’s podcast interviewed two anti-Israel sources (Basel Adra, Palestinian journalist and Michael Sfard, Israeli human rights lawyer) but failed to give voice to any pro-Israel sources. The podcast carried accusations of Israel being an “apartheid” state, of settlements being “illegal,” of Israel’s “occupation of Palestinian territories” and a discussion of the “Nakba”. Palestinian terrorism was only obliquely mentioned, almost as an afterthought.

It is not a surprise that these three CBC journalists who signed the anti-Israel open letter (Jabakhanji, Khandacker, and Cheung) produced reports harshly critical of Israel. After all, it’s not as if they produced flattering reports about Israel that depicted the Jewish state in a positive light.

While journalists are certainly entitled to have viewpoints, but by publicizing and politicizing those views, the public’s perception of journalists as being objective is compromised and the public’s trust in the CBC is eroded.

While this open letter specifically relates to Israel, the precedent being set by CBC News is wide-ranging and could mean, for example, that journalists who publicly align themselves with one particular Canadian political party or position, can then – only months later – publicly cover that same news item on behalf of the public broadcaster. This would fundamentally compromise journalistic standards at Canada’s public broadcaster and would relegate the CBC, and its journalists, as being activists, not professional journalists.

CBC News’ policy change is no small matter; it hits at the heart of the journalism profession, because bias, impartiality and accuracy in reporting are absolutely critical to any news beat, particularly one as sensitive as the Israel-Palestinian conflict.

Readers, listeners and viewers of CBC News deserve more from their publicly-funded broadcaster than this. In the interest of fairness and accuracy, and indeed to be adherent to its own Journalistic Standards and Practices, CBC News must reinstate their rule from 2021 mandating that its journalists who signed this anti-Israel open letter must not be entitled to cover news stories related to the Jewish State.

The CBC coverage of many world events has become very one-sided in the last few years, and it’s not just about Israel. Most radio hosts now interview only one side in a programme segment – I backspaced over my original word which was “story” because these articles are not stories, they are propaganda exercise, and as far as my wife and I are concerned they have earned themselves the name “Victim Radio”. Whether it’s the poor palestinians being done out of their centuries-old ancestral homes, or thousands of bones in so-called “unmarked graves”, or renaming Toronto landmarks because of an alleged link of the original name to slavery – you get the picture.

Sadly, Honest Reporting is something the CBC does not practice, and probably never will, as long as its entitled wokeista elites are in charge.

This is so wrong on many levels. We need unbiased reporting and this is the opposite

Written to Brodie Fenlon
“It is stunning to me how a purported “news” organization would allow biased “opinionists” to report on Israeli affairs.
Can you in your own mind see the fairness of this? One day the sordid legacy of the CBC will be exposed to all.”

I am appalled by the CBC’s reversed policy to allow journalists who signed an open anti Israel letter to cover Israel-related news…; how can this be unbiased “honest” journalism