HonestReporting Canada is happy to report that CBC News has agreed with our criticisms of their reporting and has taken remedial action to set the record straight. For example, CBC issued the following clarification notice appended to its reporting acknowledging that Iran’s claim that it “disbanded (its) military nuclear program” is disputed:

As well, CBC amended its reporting to include and to acknowledge the following:

While Iran said it stopped its military program in 2003, the claim is disputed by international parties, including Israel and U.S. intelligence agencies who suspect the country is using its civilian nuclear program to develop weapons in secret.”

In covering the assassination of IRGC Brigadier General and Iranian nuclear scientist Mohsen Fakhrizadeh, CBC News claimed that Iran “disbanded (its) military nuclear program” in the early 2000s, however, this claim is disputed by Israel, the current U.S. administration, etc.

Reports on November 27 and 28 on the CBC’s website, both featured this claim without evidence. In truth, Fakhrizadeh worked for the Iranian military, and was chiefly responsible for Iran’s controversial, clandestine and contemporary program to develop a nuclear weapons arsenal.

Throughout the course of 2020, Iran exceeded the uranium enrichment limits agreed to in the JCPOA, while refusing to grant IAEA inspectors access to sites suspected of playing a role in a possible military nuclear program. 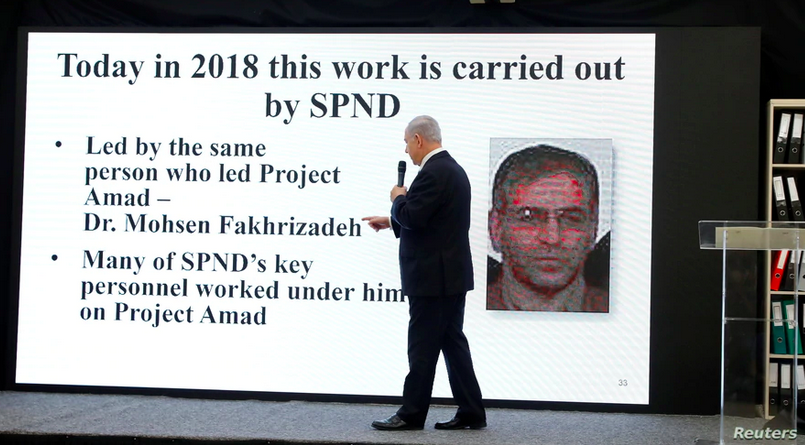 Fakhrizadeh is reported to have headed the “weaponization” group of Iran’s nuclear program, attended an underground nuclear-weapons test in North Korea in 2013 and was being “reserved” by the Iranian regime for the day that Iran’s nuclear program would enter a new stage allowing it to develop nuclear weapons without violating the deal, thanks to the expiration of the JCPOA’s sunset clause.

In 2018, Israel’s Mossad intelligence agency extracted a huge cache of nuclear archives from a Tehran warehouse which pointed to possible military dimensions (PMD) to Iran’s nuclear program. Fakhrizadeh oversaw the Amad program, which was described in 2018 by Israeli Prime Minister Benjamin Netanyahu as “a comprehensive program to design, build and test nuclear weapons.”

The New York Times reported that Fakhrizadeh was in charge of two highly secretive programs, “Project 110” and “Project 111”, which sought to design warheads to allow for the delivery of a nuclear payload with a smaller-size missile.

Importantly, on November, 27, CBC The National contradicted CBC News.ca when reporter Katie Simpson acknowledged that: “In this bullet riddled car was the scientist the west suspected of leading Iran’s secret nuclear weapons program...”

While Iran claims to have disbanded its nuclear weapons program in 2003, this assertion lacks credibility and the CBC and the mainstream media shouldn’t accept the regime’s claim hook, line and sinker. At the very least, CBC has a responsibility to tell its readers, viewers and listeners that this is a matter that is fundamentally in dispute, with Israel and the west believing that Iran has not abandoned its nuclear weapons program.

HonestReporting Canada has communicated these concerns directly to CBC News calling for immediate corrective action. Please share our alert to spread the word and stay tuned to this page for future updates.