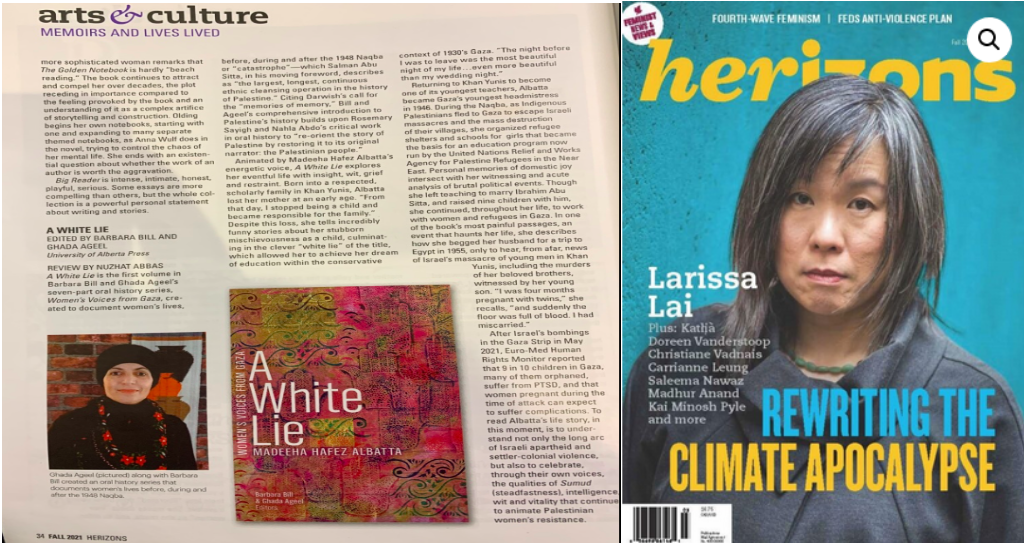 Herizons describes itself as a Winnipeg-based feminist magazine, published quarterly, which according to its website, “covers gender justice, the activists and artists making it happen, and the global feminist movement.” Herizons acknowledges that it receives funding both from the Manitoba Arts Council, and the Government of Canada.

In its Fall 2021 issue, Herizons published a review by Nuzhat Abbas of “A White Lie,” a book by Barbara Bill and Ghada Adeel, published by the University of Alberta Press, which purports to share stories about women’s experiences during the Nakba, an Arabic term meaning “catastrophe,” referring to when Israel successfully achieved independence in 1948 from the United Kingdom. (As the review is not online, it can be read in full at the bottom of this alert).

The book’s forward is sympathetically described by Abbas as “moving” and refers to Israel’s independence as “the largest, longest, most continuous ethnic cleansing operation in the history of Palestine.”

Abbas later makes reference to how, in 1948, “Indigenous Palestinians fled to Gaza to escape Israeli massacres and the mass destruction of their villages.”

Reading such historical revisionism, one is reminded of the famous quote by Daniel Patrick Moynihan, American diplomat, and politician, who said that “everyone is entitled to their own opinion, but not to his own facts.”

In this case, the authors of “A White Lie,” and the reviewer alike, are playing fast and loose with the truth.

One would be hard pressed to find a more outlandish rewriting of history than the forward quoted by the review, referring to the alleged “ethnic cleansing operation.”

Benny Morris, one of Israel’s most celebrated historians, has definitively put to rest this ahistorical claim by pointing out a basic fundamental point: Israel did not start the War of Independence, but had war thrust upon it when neighbouring Arab states invaded, looking for an opportunity to destroy the new Jewish state.

“The Palestinians were the ones who started the war when they rejected the UN compromise plan and embarked on hostile acts in which 1,800 Jews were killed between November 1947 and mid-May 1948,” Morris wrote in the left-leaning Israeli Ha’aretz newspaper in 2016, adding that Arab countries in the region had “threatened to invade even before the UN resolution was passed on November 29.”

It is true, however, that around 750,000 Arabs left Israel after the Jewish state declared independence, but they did not do so “to escape Israeli massacres and the mass destruction of their villages” as alleged by Abbas. In fact, they left for a variety of reasons, partially because they expected the quick destruction of Israel and a seamless return, and many others because they were threatened to leave by local Arab leadership who saw Arabs staying in Israel as a tacit acceptance of Israel’s legitimacy.

Today, the descendants of those Arabs have their leadership, not Israel, to blame for exiling them from the freest country in the Middle East.

If Abbas, and the authors of “A White Lie,” wanted to see what true forced exile and ethnic cleansing look like, they wouldn’t have to search far. Concurrently with Israel’s independence in 1948, nearly 800,000 Jews from Arab and Islamic lands were forcibly exiled from their longtime homes due to the antisemitic fanaticism of their governments. Hundreds of thousands of Jews fled their homes in the region, mostly heading to Israel. Many of these Jewish communities had been in place for millennia, but within a few short years, were all but eradicated, thanks to the widespread antisemitic policies and rhetoric of the regimes where they lived.

But perhaps most perplexing about Abbas’ review of “A White Lie,” is not what was included, but what was omitted, especially for a feminist magazine. The review did not mention at all how women in Gaza live today under the oppressive Hamas Islamist regime. Women are not, as per Hamas laws, allowed to leave the home without a male escort, and they suffer enormously under the gender apartheid system of Hamas’ extreme Sharia law, which dictates how women dress and what they cannot do in society. In Israel, conversely, Muslim women have the freedom to live, pray and travel as they see fit, and without any restrictions. Meanwhile, Israeli women are at the pinnacle of Israeli society, whether as CEO’s of major start-ups, supreme court justices, leaders of political parties, broadcasters, etc. Just this past week, Israel’s first female Muslim district court judge, Osaila Abu Assad, was announced.

But the path forward for Palestinians, and the way to improve their lives, is by pursuing a real and practical peace with Israel, and not by peddling and rehashing anti-Israel disinformation, decade after decade. The more that authors, critics and reviewers continue to attempt to rewrite history and paint Israel as an evil aggressor, the more that the supposed target of their support, the Palestinians, continue to have their futures robbed. Peace will only come when truth, not propaganda, is acknowledged and Israel’s existence and legitimacy is accepted.

For a publication in receipt of both provincial and federal funding, this pro-peace message would certainly be most appropriate, and a welcome change from this book review’s hostility to Israel. Please send your considered comments to Herizons Managing Editor Penni Mitchell at: editor@herizons.ca. Please refer to Nuzhat Abbas book review of “A White Lie” in its Fall 2021 edition. 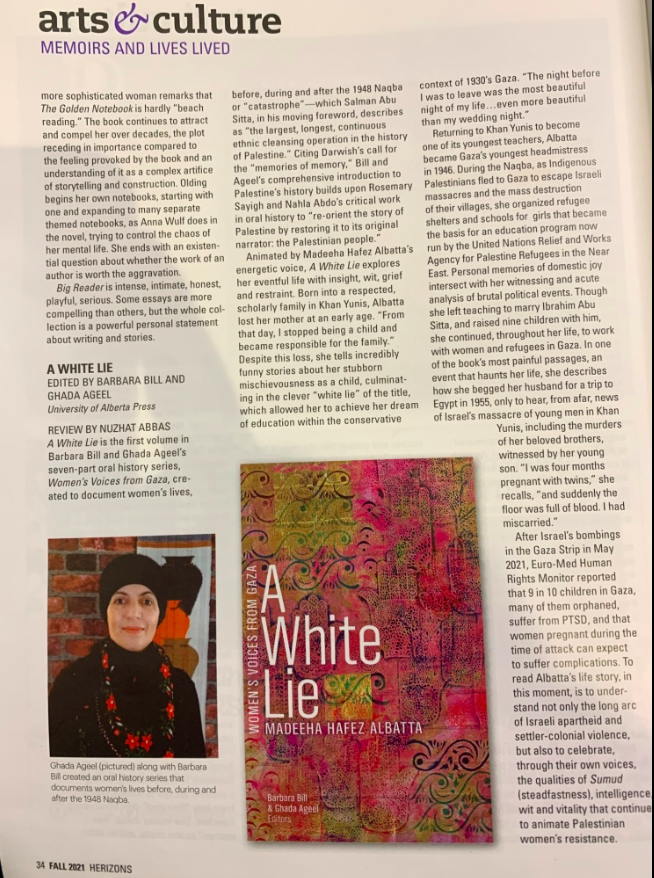