Windsor Municipal Candidate Spews Anti-Israel Venom On Facebook: Where Is The News Media? 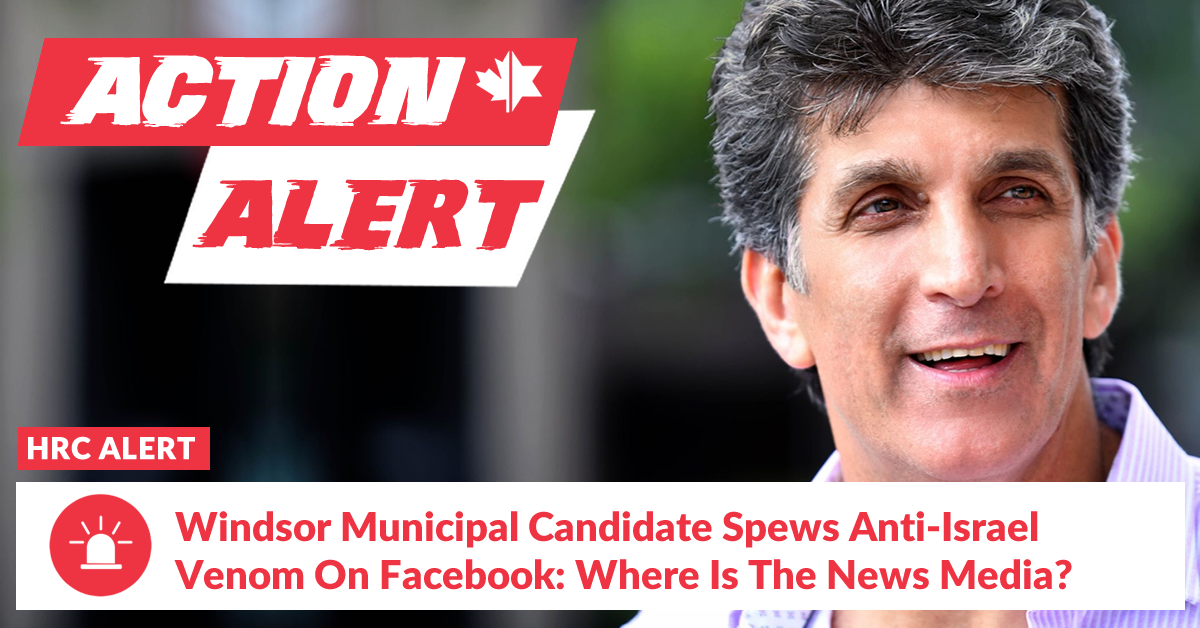 Ontarians will vote on Monday, October 24 in municipal elections held across the province.

From large cities to small towns, voters will choose elected representatives for a variety of positions, including mayors, members of council, as well as school board trustees.

In municipal elections, typical issues of concern are property tax rates, schooling and other related topics.

But that doesn’t mean all candidates across the province haven’t opined on a variety of other issues. In fact, one municipal candidate for Councillor in the southwestern city of Windsor has made a number of deeply problematic anti-Israel comments, and some that are in our view antisemitic in nature.

Helmi Charif, who is running for Ward 3 in Windsor, posted on his Facebook page in March 2022 a bizarre theory in Arabic that “Zionists” are somehow orchestrating events taking place in Ukraine.

“From a comedian to the presidency of Ukraine, of course, with Zionist efforts led by the Ukrainian Jewish Zionist billionaire accused of corruption and actually ruling Ukraine, Ihor Kolomoisky and Zelensky is nothing but a puppet of Ihor’s hand. The Zionist lobby incited Ukraine to secede from Russia and join Europe,” Charif wrote on March 1.

The same day, Charif opined on Facebook that “Western media is now of course controlled by the Zionists.”

Writing on his Facebook page on March 30, he claimed that “Zionist mercenaries” are dedicated to destroying Christians and Muslims, writing “These Zionist mercenaries were not satisfied with occupying and destroying Palestine, but also went to Ukraine and ruined it. Wherever they go, devastation and destruction will occur. They consider themselves the masters of the world and, above all international laws, and their mission is to eliminate the Islamic and Christian religions.”

HonestReporting Canada has independently verified the translation of Helmi Charif’s words from the original Arabic.

These words go far beyond simply expressing an opinion, no matter how baseless and detached from reality. The term ‘Zionists’ suggests Jews in our estimation, and such a statement – that ‘Zionists’ are aiming to destroy Islam and Christianity – is in our view a modern day take on an ancient libel: that Jews have a secret plot to wipe out other religions.

At first glance, such statements can seem outlandish, even comical, but hardly dangerous, but tragically Jewish history has shown that concocted lies about Jewish control and plots have been used to justify horrific massacres against Jewish communities, ranging from the Crusades to pogroms in Europe, all the way to the Nazi Holocaust in the 1940s.

In short, creating and spreading antisemitic lies have been used effectively for many years to create very real violence against Jews.

As previously reported by HonestReporting Canada, CD4HR is a Canadian organization whose founder. Firas al-Najim, has a long history of harassment against the Jewish community of Toronto.

Most recently, al-Najim, seemingly dressed as an Orthodox Jew, forced his way into an event for the United Jewish Appeal (UJA) of Toronto, where he berated a Holocaust Survivor and yelled at attendees for their support for Israel. He has also led a mob to boycott and intimidate shoppers outside of a Jewish-owned business in Thornhill, Ontario, among many other incidents.

As the old adage goes, you can learn a lot about a person by the company he keeps, and in this case, Charif’s comments go hand-in-hand with the actions of CD4HR and its founder, Firas al-Najim.

On the eve of Ontario’s municipal election – and indeed, for all subsequent elections at all levels of government across the country – it is incumbent on the news media to hold candidates to account for their heinous statements and affiliations. But in order to do that, they must first actually research the candidates in question.