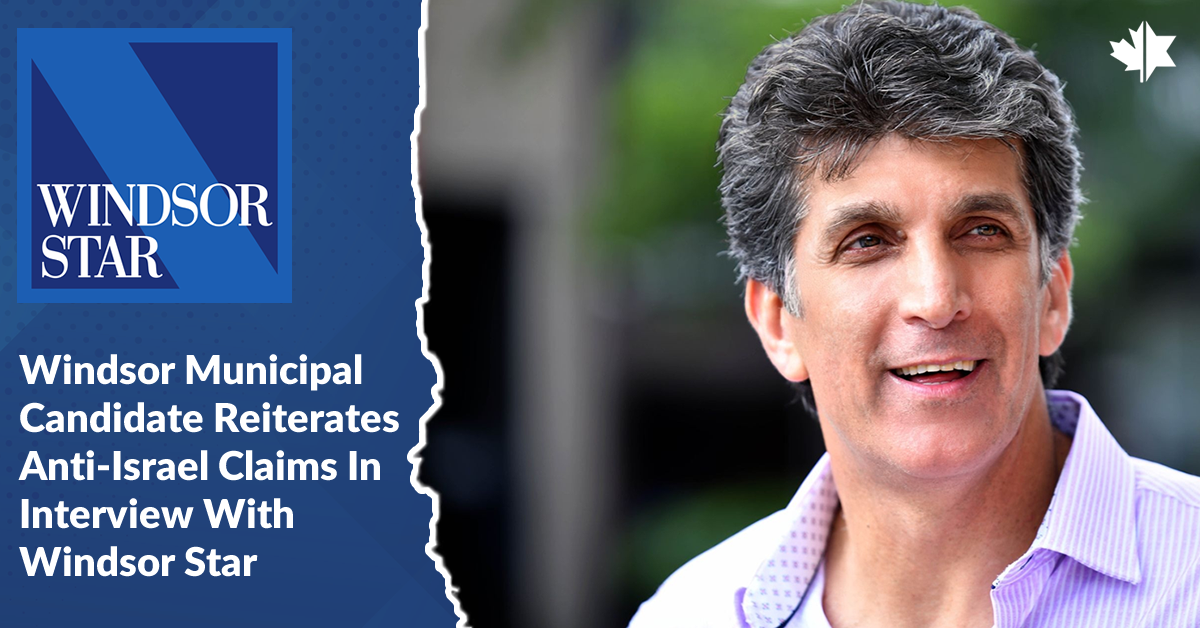 On October 23, the day before municipal elections were held across Ontario, HonestReporting Canada released an urgent alert regarding a candidate for city council in Windsor, Ontario.

Helmi Charif, who was running for Ward 3 councillor, had repeatedly uttered anti-Israel, and in our view, antisemitic statements on his personal Facebook page, which was not reported in media coverage of his candidacy prior to the election.

His comments ranged from blaming “the Zionist lobby” for the war in Ukraine, to alleging that “Western media is now of course controlled by the Zionists,” to the absurd and outlandish accusation that “Zionist mercenaries” who “consider themselves the masters of the world” are plotting to “eliminate the Islamic and Christian religions.”

The day following Charif’s loss in the election, the Windsor Jewish Federation released a statement citing our alert which called him out for his “racist and antisemitic” statements, recognizing the very real danger that “spreading antisemitic lies online often turns into real-world violence against Jews.”

Subsequently, on October 26, The Windsor
Star published an article covering
Charif’s comments and the surrounding 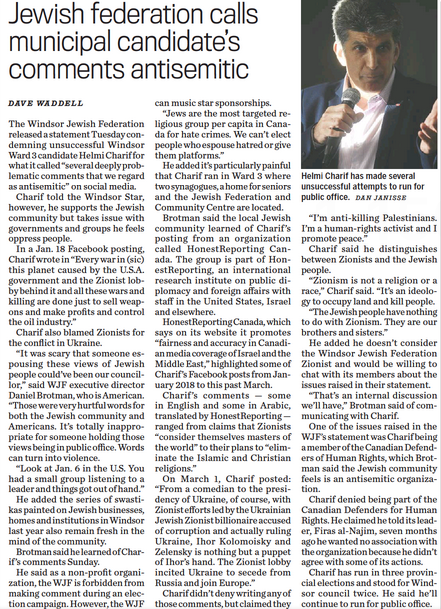 controversy, and rather than apologize, Charif doubled down on his deeply problematic statements.

According to Windsor Star Reporter Dave Waddell, Charif “didn’t deny writing any” of the Facebook comments reported by HonestReporting Canada, but attempted to justify his disinformation by claiming he merely was targeting “Zionists.”

“Zionism is not a religion or a race. It’s an ideology to occupy land and kill people,” he told the Postmedia newspaper.

While Charif attempted to frame himself as a “human rights activist” fighting injustice, in reality, he was delegitimizing the Jewish People’s right to self-determination in their ancestral and historical homeland. Indeed, according to the International Holocaust Remembrance Alliance (IHRA) definition of antisemitism, such a denial is antisemitic.

In fact, Zionism is no more and no less than the national movement for Jews to reclaim self-government in the land they have lived on for three thousand years. While the term Zionism may have its origins in the 1800s, Jews have prayed towards Jerusalem, and for their fervent hopes for a return to Jerusalem, for two millennia, since the Jewish People were exiled from their land by the Roman Empire in the first century.

By characterizing Zionism as an ideology “to occupy land and kill people,” Charif is doing nothing to advance the Palestinian cause, but rather seeking to erase thousands of years of Jewish history, and robbing Jews of the same right that he is purporting to advocate for the Palestinians.

The significance in denying the Jewish People’s right to self-determination is profound. If Israel, the Jewish nation-state, has no moral right to exist, and in fact, as Charif describes it – is “an ideology to occupy land and kill people,” then the corollary is that seeking to kill Israelis is therefore a laudable goal.

Sadly, for some Palestinians today who follow this ideology, negating Israel’s right to exist as a Jewish state leads to violence.

Although Charif lost the race to become the Ward 3 councillor for the city of Windsor, his recent comments erasing the Jewish People’s history may seem inconsequential, but in fact, they are still very relevant, primarily because he stated that he will continue to seek elected office.

“Again and again, I will run because I don’t quit,” Charif told The Windsor Star. “I want to serve my community.”

Charif’s comments may be abhorrent, but he is far from alone in expressing such heinous views. In recent weeks, articles which denied Israel’s right to exist appeared in publications across the country, including student newspapers at the University of Calgary and the University of Toronto, which will undoubtedly produce many elected officials in the future.

Reasonable people may disagree on many Israeli government policies, but in Charif’s case, he has repeatedly and unreservedly defamed “Zionists” and denied the Jewish People the right to self-government in their own homeland. Those comments are indeed beyond the pale.