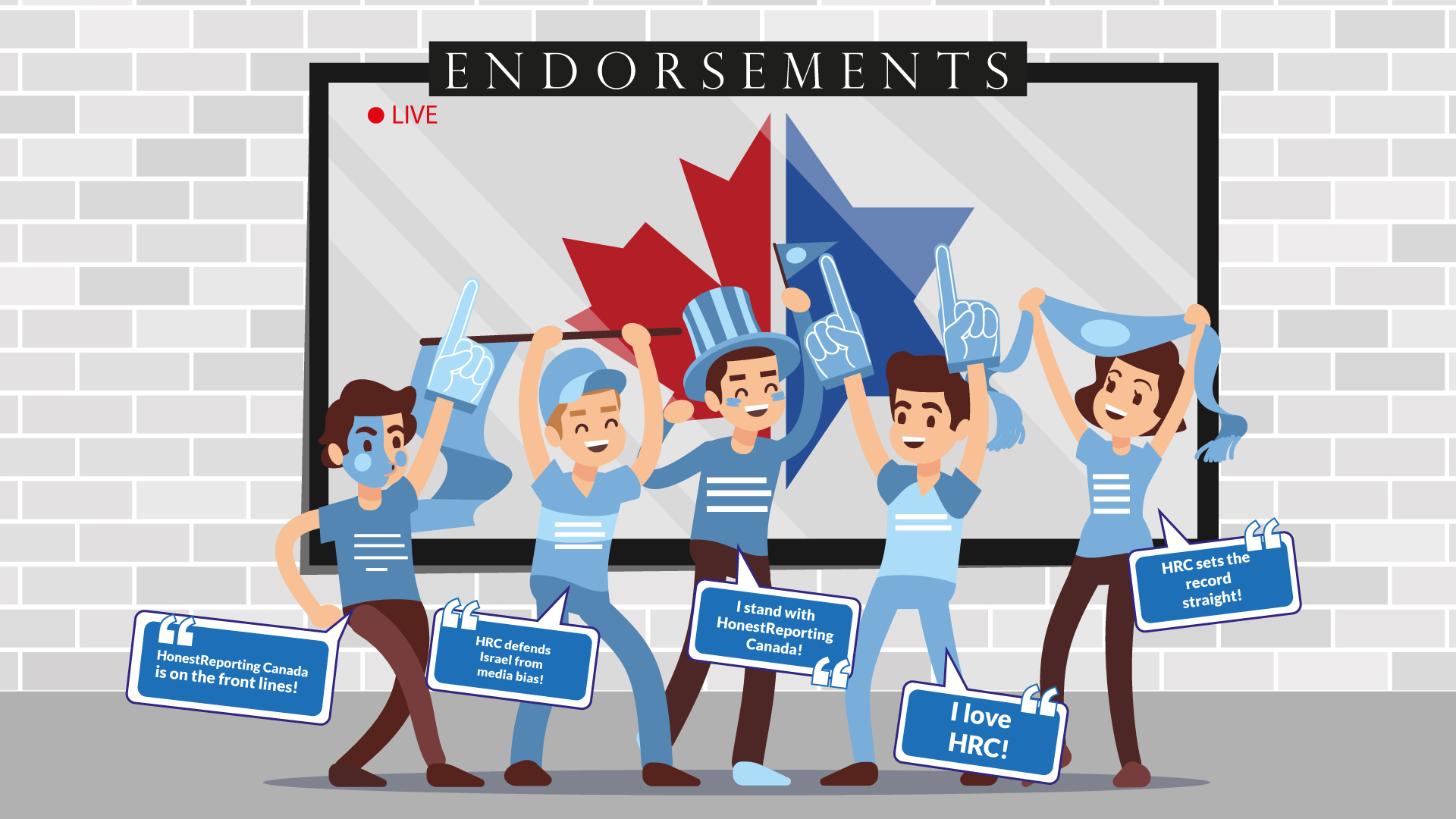 As my term as Israeli Ambassador to Canada is drawing to a close, I thought it pertinent to write you a short letter to remark on the important work Honest Reporting continues to carry out.

Since becoming familiar with the efforts of Honest Reporting, I can say that your work to address media bias against Israel and to correct the misleading reporting in Canadian media outlets is a source of inspiration for those who seek clarity and objectivity on the subject. As an organization dedicated exclusively to ensuring fair and accurate media coverage of Israel, you are a significant and vital element in this regard.

As I prepare for an end to my Ambassadorial term and I reflect on my time in Canada, your contribution as an organization that is publicly confronting media bias against Israel has been invaluable.

I hope that you personally, and Honest Reporting Canada, will continue to go from strength to strength.

Honest Reporting Canada is a leader in promoting fair and accurate news coverage of Israel. By identifying and exposing bias in headlines, pictures and words, HRC holds Canadian news organizations accountable for their Israel coverage.

It is my distinct pleasure to write in support of the efforts of HonestReporting Canada. As the most active and key organization dedicated exclusively to ensuring fair and accurate media coverage of Israel here in Canada, HRC is on the front lines in keeping Canada’s media honest.

I would like to take the opportunity to specifically congratulate HRC for their efforts to work with the community here in Toronto. Working in tandem with other community-based pro-Israel organizations, HRC has displayed both professionalism and leadership, in their attempts to work in a collaborative manner. Their efforts deserve to be commended.

On behalf of UJA Federation of Greater Toronto, we are pleased to support the combined activities and continued efforts of HonestReporting Canada and encourage friends of Israel to join with them in helping to convey Israel’s message to the Canadian public at large.

Honest Reporting Canada is an invaluable ally in the war against disinformation in the mainstream media. For years it has offered Canadians from all walks of life an unbiased and accurate depiction of the situation in Israel and the Middle East. I applaud HRC for its courageous work in educating the public and in making Canadian news outlets accountable for their reporting on Israel and the region.

HonestReporting Canada is a respected, reliable source that is at the forefront of accurate reporting on the Arab-Israeli conflict. I am especially pleased that they have brought their efforts to the province of Quebec to monitor French-language media coverage of Israel. French news coverage has been traditionally critical of Israel and I am happy to see that an organized response mechanism is in place to ensure fair and accurate media coverage of the Middle East in both of Canada’s official languages.

HonestReporting Canada should be commended for its impressive record of vigilance in drawing public attention to anti-Israel bias here in Canada.

Several months have passed since we were fortunate enough to have Dov Smith visit Maple Downs on behalf of Honest Reporting Canada to enlighten our membership. How refreshing to be able to separate fact from fiction on concerns that are so near and dear to all of us.

I could not let the season pass without thanking all those from Honest Reporting Canada for the wonderful work that they do on behalf of Israel and the many issues prevailing there.

Wishing you continued success with your campaign to re-educate the public and in so doing, lighten the burden of deception so prevalent these days.

I would like to compliment Mike Fegelman and his fine organization, HonestReporting Canada, on the excellent work that they do. As a media “watchdog” organization, Mike, Dov and his staff of volunteers have challenged the anti-Israel and anti-Jewish material that have been disseminated by all forms of the media. The people of this organization have demonstrated the commitment and effectiveness in holding various reporters and organizations accountable for the accuracy and fairness of their stories and assertions.

Furthermore, Mike and Dov have been very co-operative and accessible. They have manifested an extraordinary willingness to make themselves available and have been very generous with their time. They have spoken to the students at our school and we have discussed tentative plans for a number of future engagements in the upcoming school year.

Their lectures and discussions are informative, thorough and though-provoking. They inspired and energized the student audience who were in attendance. In summary, I firmly believe that Honest Reporting Canada is providing a great service to our community and is most deserving of our support.

Honest Reporting Canada has equipped thousands of students across Canada with the skills and tools necessary to be effective advocates for Israel.

Many campuses that used to be places of intimidation for Jewish students, along with those that support Israel, now allow students to walk as proud supporters of Israel.

Most notably, I want to applaud the efforts of HRC to monitor the Canadian campus media, where an anti-Israel bias is prevalent. This problem is particularly acute on campus, at a time when students are forming their own conceptions of the world and how it works; they are particularly susceptible to the lies and misconceptions that are spread throughout the student media.

Campus newspapers and broadcast outlets are a source for news and a forum for discussion. But when the news and editorial contain blatant anti-Israel bias they only serve to contribute to the anti-Israel sentiment on campus.

The McMaster Jewish Students’ Association had the privilege of inviting HonestReporting to McMaster University to create a workshop with our students and community. The work of HonestReporting is so important. The lies and distortions of the truth which have been distributed throughout the world through all forms of media are very disturbing. This group is doing a major service to inform the communities of the world the true facts and help dispel the gross exaggerations and outright misinformation that has been disseminated. We thank them for their energy and tireless work to get to the truth.