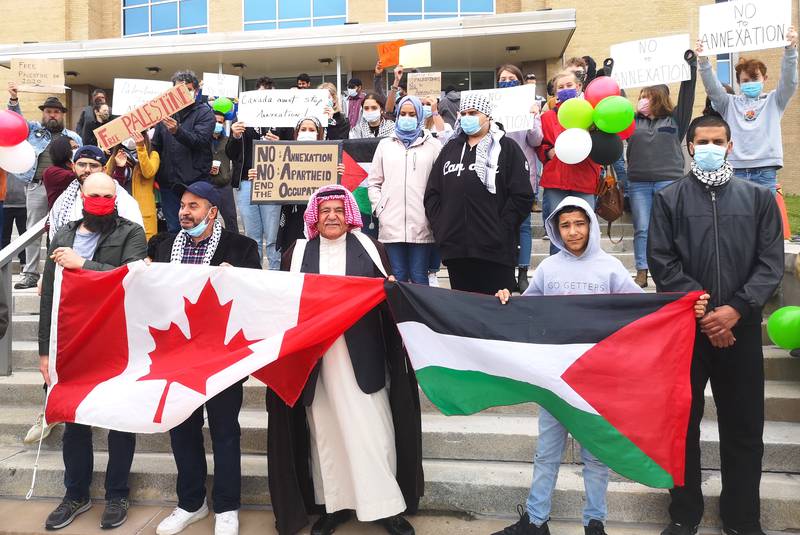 Media outlets love to cover protests. Without exerting much effort, journalists ably present a narrative of conflict mixed with fiery passions that are easily digested by the cameras. Many protests are staged as a manipulative public relations exercise and the media, more often than not, are complicit in providing a platform.

On July 5, anti-Israel protestors gathered at the Confederation Building in St. John’s, Newfoundland, as a part of domestic and worldwide protests, dubbed “Day of Rage,” to oppose Israel’s plans to apply sovereignty to Judea and Samaria.

NTV News TV which claims to have 1.6 million weekly viewers, aired a segment about the protest that was replete with errors about the protest of several dozen anti-Israel protestors. (Watch the report by clicking here or on the image below).

It’s a conflict that is half a world away, between Israel and Palestine. But, it made its way to St. John’s yesterday, as dozens of protesters met at the Confederation Building to denounce the annexation of Palestine.” 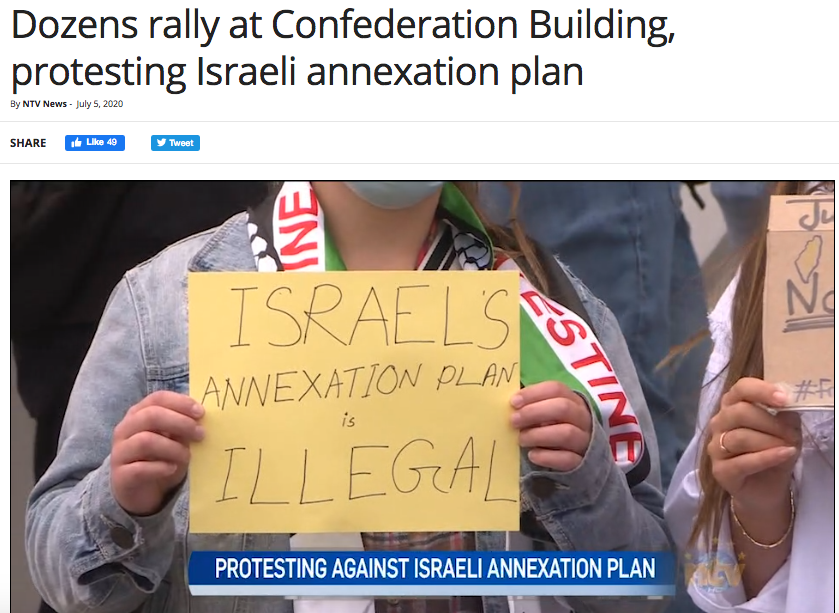 Firstly, there is no such recognized State of “Palestine” in existence, only the Palestinian territories. Secondly, Israel is in no way carrying out an “annexation of Palestine”.

Not acknowledged by NTV News or by the protestors at the Confederation Building, is that while Israel’s plans to apply sovereignty to Judea, Samaria and perhaps the Jordan Valley are divisive, the Jewish state has legitimate legal and ancestral claims to these lands.

In similar fashion, the Saltwire newspaper ,The Telegram, also produced one-sided coverage of the protest and of Israel’s sovereignty application in its print edition on July 6.

Untold by both NTV News and The Telegram, Israel plans to apply Israeli law to the Jordan Valley and 30% of Area C territory per the Oslo Accords of Judea and Samaria (“west bank”) per the Trump peace plan and consistent with past U.S. peace proposals that have long understood that Israel will retain these areas in a final peace accord.

Israel says international law enshrines its rights to these lands, while citing the need for defensible borders and biblical, historical and political connections to the land. Protestor’s claiming that Israel is violating international law and kicking Palestinians out of their lands is without foundation and implies that Israel and the Jewish people’s connection to the land is illegitimate.

Make no mistake, Jews are Indigenous to the historic land of Israel and have lived there, uninterrupted, for over 3,000 years. As Israel says, you cannot be an “occupier of your own home,” nor can you “annex” land you have sovereign claims to.

It was equally troubling that NTV News elected to broadcast an inflammatory and unfounded statement made by Yamen Shawan, an anti-Israel protestor, who claimed that Israel is violating international law and violating human rights by kicking Palestinians out of their land, claiming that if they refuse, they get killed or thrown in jail. Importantly, there is no truth to this blasphemous claim that NTV elected to broadcast to its viewing audience.

HonestReporting Canada has communicated our concerns to The Telegram and to NTV News directly calling for corrective action and we encourage you to do the same.

Send emails to The Telegram at: letters@thetelegram.com.