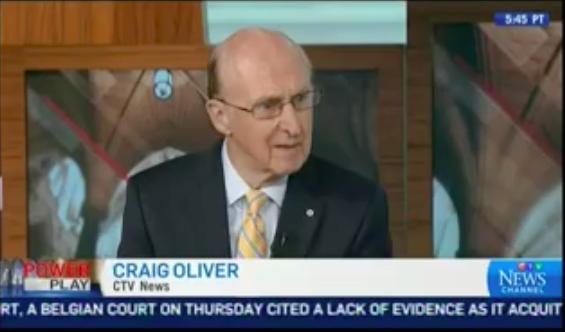 On May 17 at 8:46pm on CTV’s PowerPlay with host Don Martin, there was a panel discussion where Craig Oliver, CTV’s Chief Political Commentator, made several outrageous comments on the violent Palestinian riots on Israel’s border with Gaza recently.

Disturbingly, Craig Oliver acted as a Hamas apologist and outright defended Hamas, an outlawed terror group. When asked if he thought that Prime Minister Justin Trudeau had over reacted (in his recent statement which condemned Israel exclusively) Oliver said (emphasis added):

No, I don’t think so. It’s inexcusable and appalling to use live ammunition against people who aren’t shooting at you, throwing rocks and using snipers. They wounded a Canadian first responder, a doctor who was hit by a sniper bullets... I don’t know how you avoid saying, and everybody is saying ‘blame Hamas for this,’ Hamas wasn’t shooting at anybody! And I know that they do incite these kind of things. I had not heard that most of the people wounded or shot were Hamas militants.”

To which, Anchor Don Martin said that this is what Hamas admitted to. Oliver retorted:

The party line from the Israeli government is that Hamas is behind all of this, yes maybe they are, but they (Hamas) weren’t there shooting at anybody. They were peacefully demonstrating.”

Watch this segment by clicking here or immediately below:

Regarding Tarek Loubani, the Canadian doctor who claims he was allegedly hit by IDF snipers, the culpability for this is unknown and it must be remembered that he’s regarded as a “radical grandstander” and a hard-core anti-Israel activist who cavorts with other known Hamas terrorists.

Oliver even casts doubt about Hamas’ own claims that 50 of its fighters were killed by the IDF. Oliver claims Hamas was only there to engage in “peaceful demonstrating” not to infiltrate Israel to massacre innocents and to also create a PR campaign to tarnish Israel’s reputation.

Importantly, when Palestinians throw rocks and other heavy objects, they can kill. A young Israeli child named Yonaton Palmer was killed by a rock thrown by a Palestinian and recently, an IDF soldier was murdered when a marble slab was dropped on him by a Palestinian.

Please file a complaint with CTV PowerPlay to condemn its Chief Political Commentator, Craig Oliver’s, acting as an apologist for Hamas, an outlawed terror organization committed to the destruction of Israel and the genocide of Jews. Please refer to PowerPlay’s May 17 broadcast and send emails to CTV News President Wendy Freeman at: Wendy.freeman@bellmedia.ca.