Israel Is An Imperfect Country, But A Vibrant...
Why Are Anti-Israel Activists So Afraid of The...
McGill Tribune Publishes Op-Ed Calling for a Boycott...
Ontario Arabic Paper’s Editor Downplays Holocaust; Meshwar Describes...
How the War in Ukraine is Having a...
Toronto Star Columnist Shree Paradkar Wrongly Claims IHRA...
After Vancouver Adopts IHRA, CBC Radio Interviews Fringe...
Qatar Prepares For The 2022 World Cup: Will...
Lawfare: Who is Using the Law More Effectively?...
Official Publication of the College of Physicians and...
Home Media Action Alerts2018 WATCH: CBC Broadcasts Outrageous Jewish Conspiracy Theory

You’d expect to see outrageous Jewish conspiracy theories in the annals of Holocaust denial websites, not on our public broadcast’s airwaves.

Disturbingly, on May 20, CBC’s “The Weekly” news program aired an odious “news report” and “interview” that was nothing short of a Jewish conspiracy theory. The CBC News program hosted by Anchor Wendy Mesley interviewed Ken Vogel, a political reporter for the New York Times. Mesley explained the focus of the report as follows on Twitter: 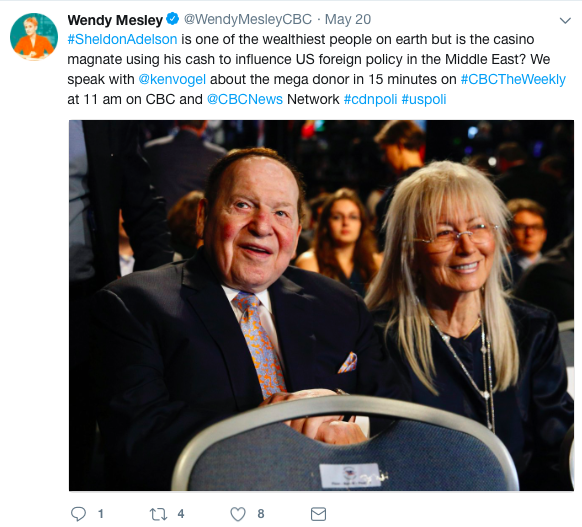 The CBC program (watch by clicking here or by clicking immediately below) centres on how wealthy Jews (specifically casino magnate Sheldon Adelson and his net worth of $40-billion+) effectively control U.S. President Donald Trump and his inner circle which was “instrumental in persuading Trump” to move the U.S. Embassy to Jerusalem and to pull out of the Iran nuclear deal. 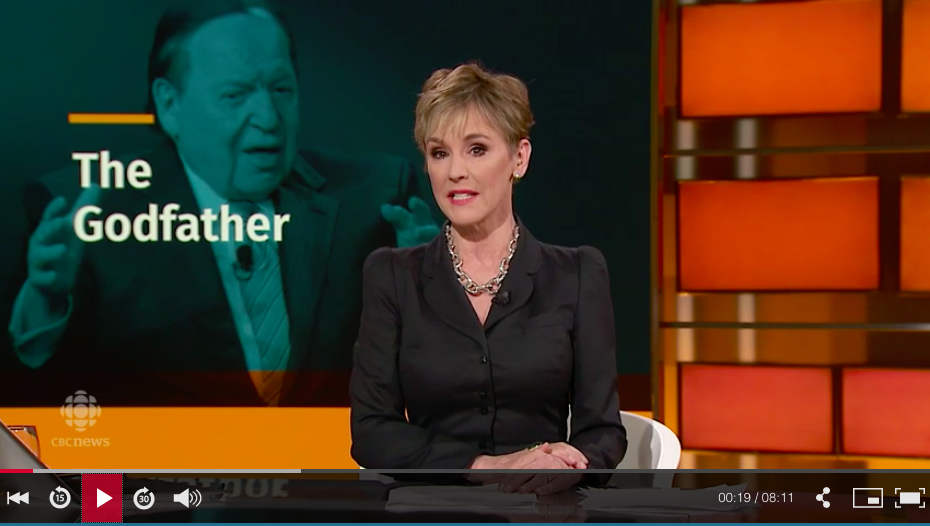 The report attempts to shame former Canadian prime minister Stephen Harper for having “ties” with Adelson and for their shared values and interests when it comes to being a friend to Israel and for being critics of the Iran nuclear deal. Mesley lists 9 ties on her Twitter thread.

At its core, the report centres on how Jewish money, which is both influential and “disproportionate,” effectively controls U.S. Middle East foreign policy which thereby enables the Israeli tail to wag the American dog.

Adelson is described as “the Godfather of the Republican party”.  Reporter Vogel says Adelson is “… hawkish, pro-Israel, (part of a) conservative circle that is so influential in American politics.” Vogel claims Adelson is the “enforcer” who acts as an intimidating force who sets the stage for U.S. Mideast policy. (Sound familiar? Substitute Rothschild for Adelson to understand where this is coming from). 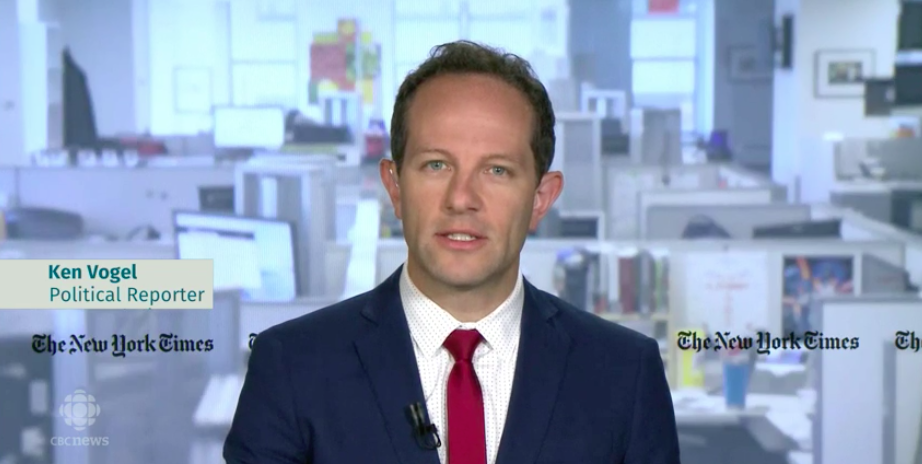 The CBC report also implies that Adelson tacitly controlled Stephen Harper too and impacted his views on Israel and the Middle East when he was a sitting Canadian prime minister. Nowhere does the CBC acknowledge that now as a private citizen, Harper can say and do as he pleases and that his support for the Jewish state well proceeded his attending an event in 2016 when he was the guest-in-honour at Adelson’s Las Vegas mansion, which the CBC says was a “private gathering for Jewish Republicans”.

America, Trump, Harper, etc. for the CBC, are not smart enough to make good, principled decisions on their own. They are being manipulated by Jews and their endless supply of money.

There was no consideration by the CBC for how the U.S. decision to move the Embassy to Jerusalem had bipartisan support and was part of American law supported previously by former U.S. Presidents Obama, Bush and Clinton and that Trump is just the only U.S. president who actually followed through on his campaign pledge. As to Iran, it’s not just about Israel, but about regional stability and the threat that a nuclear-armed Iran also posed to the U.S. and the international community. Importantly, since just about day one of the signing of the Iran nuclear deal, Donald Trump has been a fierce critic of the deal. And yet, this CBC report would have you believe that it was Adelson’s “lobbying” and financial support that chiefly caused Trump (a multibillionaire himself) to pull out of the deal.

Mesley references a full-page New York Times ad paid by the Friends of Israel initiative, to which, Harper is a founding member, which expressed support for President Trump’s leadership on pulling out of the Iran nuclear deal. At no time did this CBC program acknowledge that the letter wasn’t just signed by Harper, but also by former Australian prime minister John Howard, Nobel Peace Prize winner and former Northern Ireland first minister David William Trimble, and other 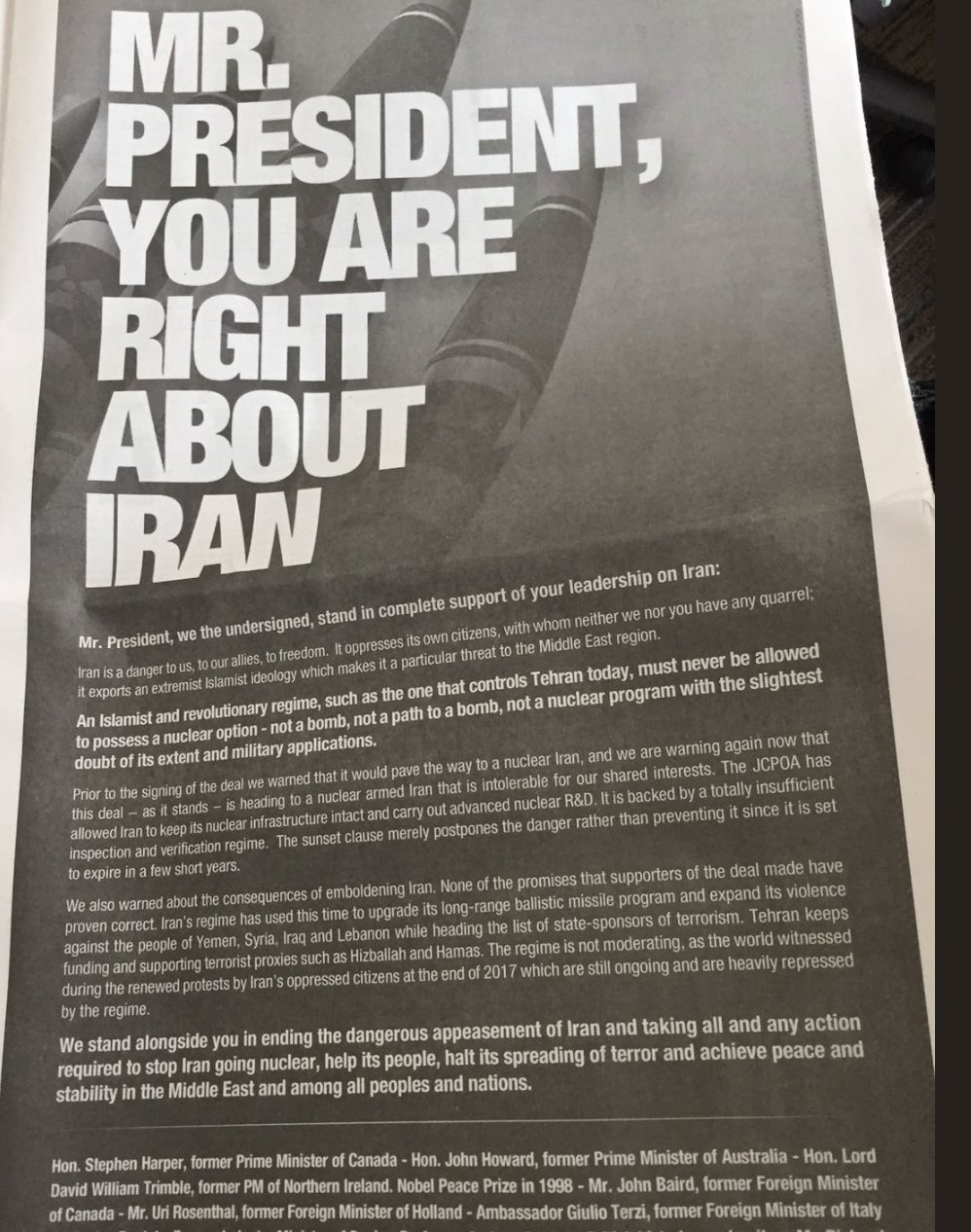 The CBC’s program also failed to mention the huge sums of Arab funding (largely Saudi money) which is donated to American political parties, Democrats and Republicans alike. Alas, for the CBC, it’s only about the Jewish-Israel Lobby (I.E. Walt and Mearshiemer) not the Arab Lobby (Mitch Bard).

Importantly, the Ottawa Protocol on Combating Antisemitism (featured on the CBC’s website no less) asserts and condemns the resurgence of classic anti-Jewish libels, including:

“The myth of the “new Protocols of the Elders of Zion” – the tsarist forgery that proclaimed an international Jewish conspiracy bent on world domination – and accuses the Jews of controlling government, the economy, media and public institutions.”

“Making mendacious, dehumanizing, demonizing, or stereotypical allegations about Jews as such or the power of Jews as collective – such as, especially but not exclusively – the myth about a world Jewish conspiracy, or of Jews controlling the media, economy, government or other societal institutions.”

This “hard-hitting” exposé by the CBC outrageously led Canadian viewers to believe that the long tentacles of the world wide Jewish lobby is undermining Canadian and American values and is effectively controlling government leaders and agendas.

The CBC’s report and its conspiratorial tone, carried a central thesis about influential people in power who are manipulated by a rich cabal of Jews who are unduly hijacking American and Canadian politics. HonestReporting Canada has filed a complaint with CBC Editor-in-Chief Jennifer McGuire and we strongly ask all HRC subscribers to file a complaint about CBC The Weekly’s May 20 broadcast for its outrageous Jewish conspiracy theory. Send emails to: Jennifer.McGuire@cbc.ca.