Why It’s So Important To Understand That Jews...
Anti-Israel Organization at McGill University Suspended For 105...
University of British Columbia (UBC) Student Government Releases...
Backgrounder: A Primer on Israel’s Upcoming Elections
Why We Need to Tell More Personal Stories...
Globe & Mail Story On Gaza Blockade All...
Review of Journalism Magazine Defends Journalists Who Act...
Globe and Mail Insinuates That Armed Palestinians Killed...
WATCH: Iraq Passes New Law Criminalizing Ties with...
How The Lie of a Colonialist Israel Is...
Home Media Action Alerts2014 Walrus Contributor Conjures up False Notion that Criticism of Israel is Taboo

Writing in Walrus Magazine this month, Joseph Rosen engages in his own linguistic warfare by bringing up anti-Semitic canards like alleged Jewish control of the media and by referring to “Zionist money” that funds various “lobby groups”. 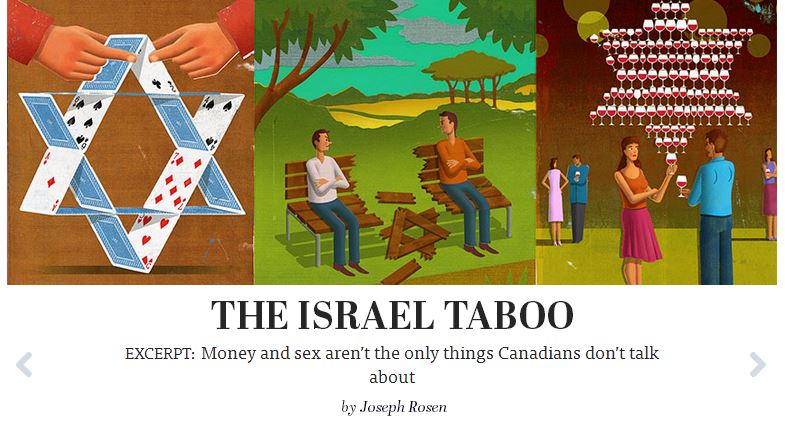 Rosen himself dismisses the fact that Israel, a nation born out of the ashes of the Holocaust and the genocide of over six million Jews, is under consistent existential threat specifically by the potential of a nuclear-armed Iran which openly calls for Israel to be wiped from the map.

Rosen conjures up a false notion that criticism of Israel is “taboo,” whereas in reality it’s everywhere and within Israel itself it’s warmly and vigorously embraced. Indeed, the mere comparison of Israeli policies to the Nazis that Rosen alludes to is anti-Semitic, so says the Ottawa Protocol on combating anti-Semitism.

Finally, with respect to the BDS (boycott, divestment, and sanctions) movement referred to by Rosen, it only serves only to demonize, isolate, and challenge Israel’s legitimacy. Even BDS’ most vocal adherent, Professor Norman Finkelstein, disavowed the campaign, calling it “silliness, childishness, and a lot of leftist posturing… I mean we have to be honest…  They don’t want Israel… there’s a large segment of the movement that wants to eliminate Israel.”

And yet, Rosen has the temerity to imply that Israel practices apartheid, despite the fact that Israel is the only liberal democracy in the Middle East in which its 20% Arab minority enjoys full equal rights before and under the law. Instead, Israeli Arabs consistently affirm they would rather live in Israel as a minority than anywhere else in the Middle East as part of the majority. This “apartheid” libel does not offend only Israelis, but stands as an affront to all those who would campaign against real apartheid were they not misdirected by a campaign of disinformation that excels in rhetoric because it lacks truth and substance.

Rosen is slated to appear on CBC Radio’s Q program with Jian Ghomeshi  tomorrow, Wednesday January 29. The program describes the segment as follows: “Amid fresh accusations of anti-Semitism when it comes to criticism of Israel, we convene a Q panel on the state of the public conversation in Canada on the Middle East and how it can move beyond the current polarization — with Joseph Rosen (writer of “The Israel Taboo” for The Walrus) and the National Post’s Jonathan Kay.”

Please do the following: