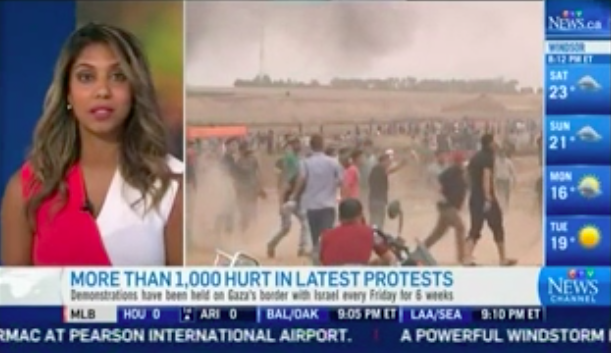 Continuing this trend, on May 5, CTV featured an interview with Mira Sucharov, a Carleton University professor (and Haaretz contributor) who is an ardent critic of Israeli policies. (It goes without saying that professor Sucharov is entitled to her views).

This interview was slanted, lacked context and crucial details and provided an unfair and one-sided depiction of the Gaza riots.

Watch the interview by clicking here or below.

CTV’s host introduced the interview by stating that six Palestinians had been killed in an explosion. Untold by CTV, but which was reported by the BBC, is that these individuals were all members of the Hamas terror group and that the IDF denied any involvement in the explosion. It appears to be another “work accident,” wherein explosives destined to be used against Israeli targets, prematurely exploded killing the Palestinian terrorists.

CTV’s interview focused on how this week’s protests saw over 1,000 Palestinians injured and how Gaza is suffering from a “humanitarian crisis”.

In the interview, Professor Sucharov claimed that there’s a de facto Israeli “occupation” of Gaza, despite there being no Israeli military or civilian presence in the Palestinian territory as Israel disengaged from Gaza in 2005.

CTV anchors are duty bound to ask hard questions and to provide a balanced perspective about controversial issues. Regrettably, this CTV interview was unfair, one-sided, and omitted mentioning important information and context about Israel’s security concerns and perspectives.