On June 29, the Vancouver Sun published the following article by reporter Joanne Lee-Young to its website entitled “B.C. man aboard ship reportedly captured by Israeli forces”. 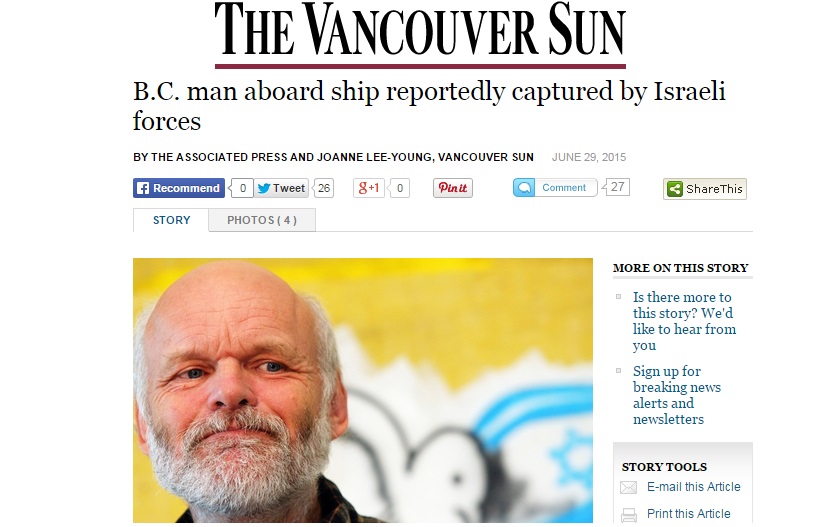 We were troubled that the article failed to acknowledge that a recognized terror group, Hamas, runs the Gaza Strip and this organization fired 4,000 rockets at Israel last summer. Another matter that went unmentioned in this article was how Israel’s interdiction of this flotilla vessel by sea was done in strict accordance with international law and even received backing from the United Nations Secretary General. Israel enforces a legal UN-approved maritime blockade of Gaza to prevent the transfer of weapons and war materials to the Hamas terrorist organization, a recognized terror group here in Canada.

Fundamentally, Israel assists in transferring goods and humanitarian equipment to Gaza – approximately 800 trucks a day that have recently brought into Gaza more than 1.6 million tons of goods. Moreover, Israel assists in hundreds of humanitarian projects, through international organizations, including the building of clinics and hospitals.

As we told Vancouver Sun editors, Israel is obligated to protect its citizens and has to take these necessary security measures. Even so, it goes to great efforts to provide for the humanitarian needs of Palestinians in Gaza.

The same day that this article was published, we asked the Sun to amend this article and to take into account Israel’s concerns in the interests of balance, context and fairness.

We are pleased to report that the Vancouver Sun, specifically its Deputy Editor, Adrienne Tanner, did the right thing by amending and adding the following context which now appears in this article thanks to our intervention:

Israel has maintained a blockade of Gaza since Hamas militants took power in 2007. Islamic militants in the coastal strip have fired thousands of rockets toward Israel and have repeatedly tried to smuggle in arms by sea. Israel says the blockade is needed to prevent the militants from stockpiling weapons.

Prime Minister Benjamin Netanyahu said the naval blockade of Gaza is in accordance with international law.

“This flotilla is nothing but a demonstration of hypocrisy and lies that is only assisting the Hamas terrorist organization and ignores all of the horrors in our region,” he said. “We are not prepared to accept the entry of war material to the terrorist organizations in Gaza as has been done by sea in the past.”

Israel says it transfers about 800 trucks a day into Gaza and recently brought in more than 1.6 million tons of goods. It says it assists in hundreds of humanitarian projects, through international organizations, including the building of hospitals and clinics.

Olympics of Hate: Antisemitism at the World Games:...