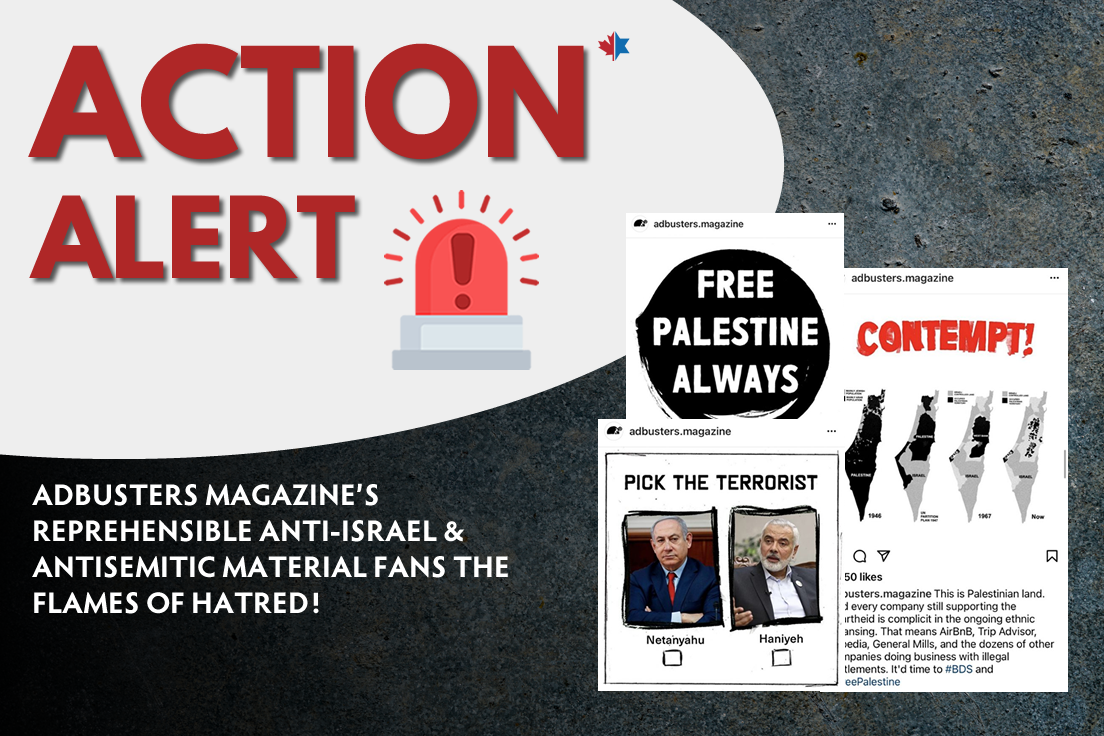 Based in Vancouver, Adbusters has a long history of publishing content which has been accused of antisemitism.

In 2004, the anti-consumerist/activist magazine was condemned by Canadian Jewish groups, including HonestReporting Canada, for running a list of influential neo-conservative U.S. policymakers and placing an asterisk next to the Jewish names. In 2010, Adbusters published an antisemitic photo essay which equated Israel’s military actions in Gaza with the destruction of the Warsaw Ghetto. Importantly, comparing contemporary Israeli policies to the Nazis is antisemitic according to the International Holocaust Remembrance Alliance (IHRA) definition of antisemitism.

For Canadians identifying as politically progressive, Adbusters magazine could have served as an important media outlet sharing news and thoughtful opinion from a left-leaning perspective. Yet tragically, it spews a torrent of baseless, hateful and misinformed anti-Israel missives on social media and in print.

On its Instagram page in October, Adbusters posted an image reading “Free Palestine Always,” with a long caption which read, in part: “This summer the State of Israel launched a massive bombing campaign against Palestinian civilians… and began pushing Palestinians out of their homes with a fervor not seen since the Nakba.” 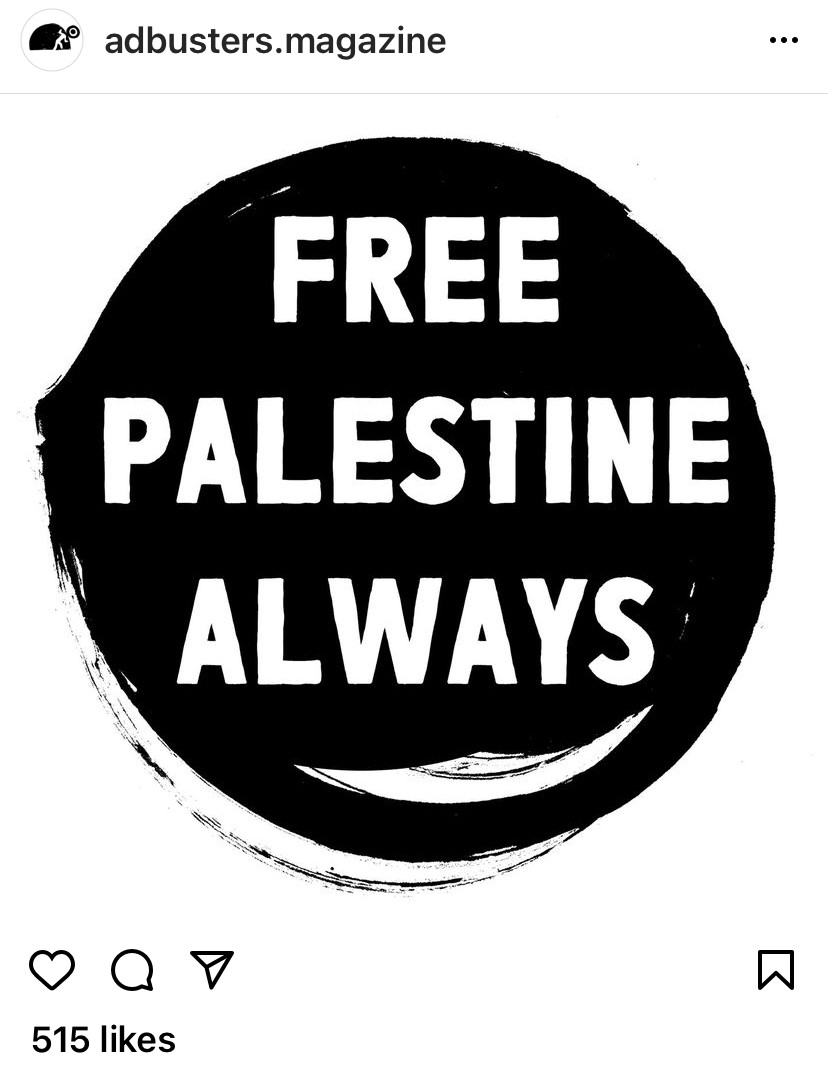 This is little more than bald-faced historical revisionism. In May, a Palestinian man was filmed slapping a religious Jew in Jerusalem, which spurred a growing number of assaults against Jews in the city. Before long, the ‘TikTok Intifada’ was born. Around the same time, a group of Arab tenants in a Jewish-owned building in Jerusalem were in the process of being evicted for the non-payment of rent. The confluence of these two incidents were a golden opportunity for Hamas, the medieval, homophobic and misogynistic terror group which rules Gaza, which seized the opportunity to then further whip up anti-Israel hate. A coordinated campaign of violent Palestinian riots began to spread, and Hamas then began firing thousands of rockets into Israeli population centres, hoping to spur a response and gain widespread Palestinian support in return.

Additionally, the term ‘Free Palestine’ is widely employed by anti-Israel activists to call for the eradication of Israel as a Jewish State. For many Jews, it is a thinly-veiled attempt to rob them of claims to their indigenous homeland. In this same Instagram post, Adbusters makes clear that it stands in “opposition to Zionism” and Jewish self-determination in its historic homeland, but in support of “Palestinian self-determination.” Denying Jews of this inherent right is antisemitic according to IHRA.

It is indisputable that Hamas manipulated, for its own narrow political ends, the Palestinian cause, and willingly – enthusiastically, even – put its own civilians in harm way. What is inexcusable is that, for some voices in the west, ostensibly Adbusters Magazine, that cynical approach actually worked.

Another Adbusters post on Instagram in May featured an image of former Israeli Prime Minister Benjamin Netanyahu, alongside Hamas leader Ismail Haniyeh, with the headline “Pick The Terrorist,” and the caption asked “who’s the real terrorist here?” 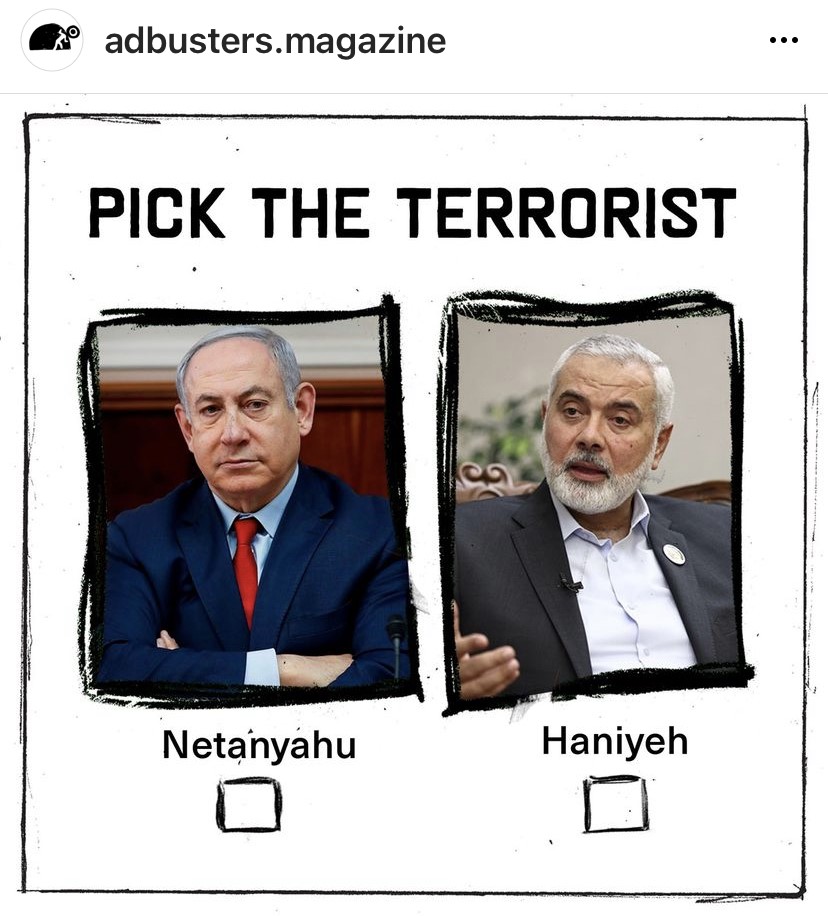 Hamas is a group which executes homosexuals, does not allow women to leave the house without a male guardian, and has sent suicide bombers into Israeli cafes, discotheques and other civilian targets with the explicit goal of murdering Jews. It is committed to Israe’s destruction. Israel is a cosmopolitan, liberal democracy with two million Arabs who enjoy full civil and democratic rights, and where an Islamist Arab party even sits in the governing coalition with Prime Minister Naftali Bennett, whom Adbusters has referred to as a “guns-blazing ethno-nationalist.”

No rational mind would compare a democratically elected prime minister of Israel with the unelected leader of an Islamist terrorist group, but evidently that has not stopped Adbusters from doing so. 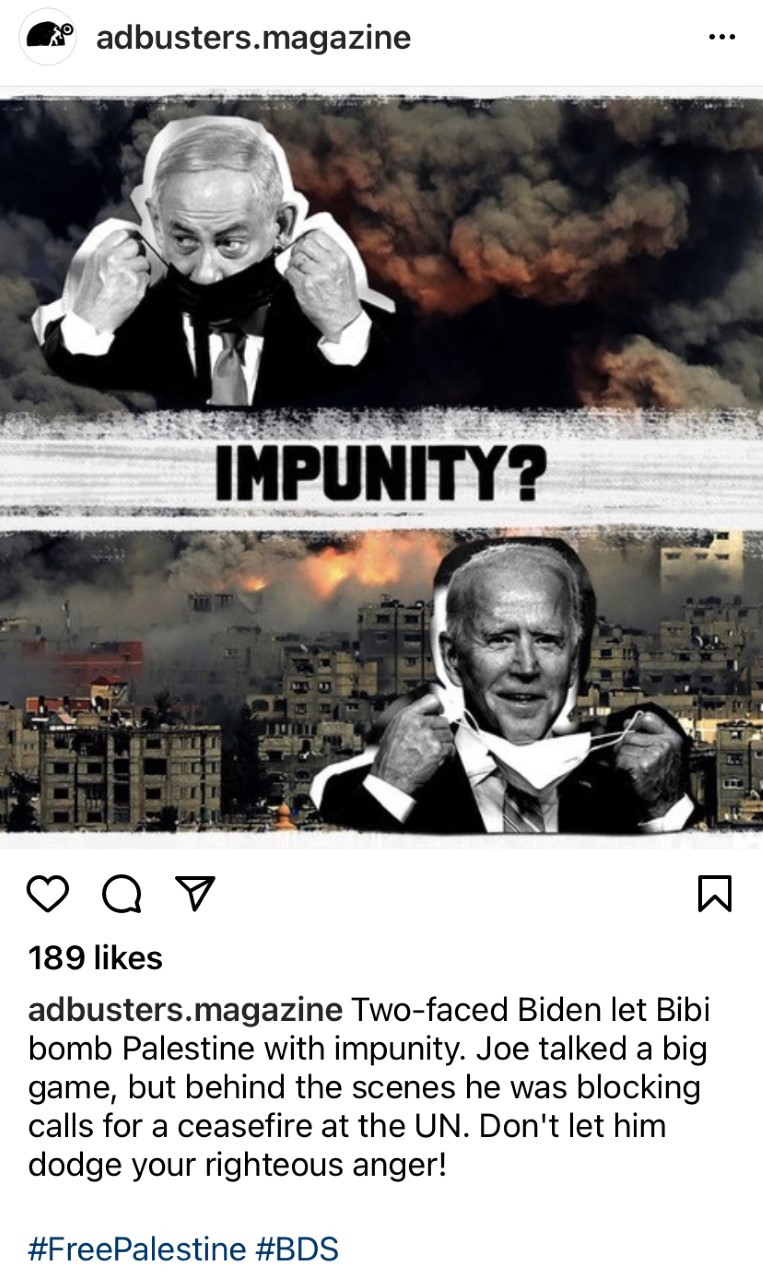 That same month also on Instagram, Adbusters published an Instagram post attempting to portray Israel as a thief of Palestinian land, but once again, nothing could be further from the truth. In 1947, when the United Nations presented the Partition Plan, even though the large majority of historical Israel would not be included, the Jewish representatives welcomed the plan, while Arab delegates to the United Nations voted against it. And when, after the United Nations Partition Plan was passed, Israel’s Arab neighbours invaded, attempting to destroy the newly reborn Jewish State. Israel has the historical and legal right to its land, with Jews having three millennia of continued presence in their indigenous homeland. No amount of misinformation will change that reality. (For more information on these misleading anti-Israel maps, click here.) 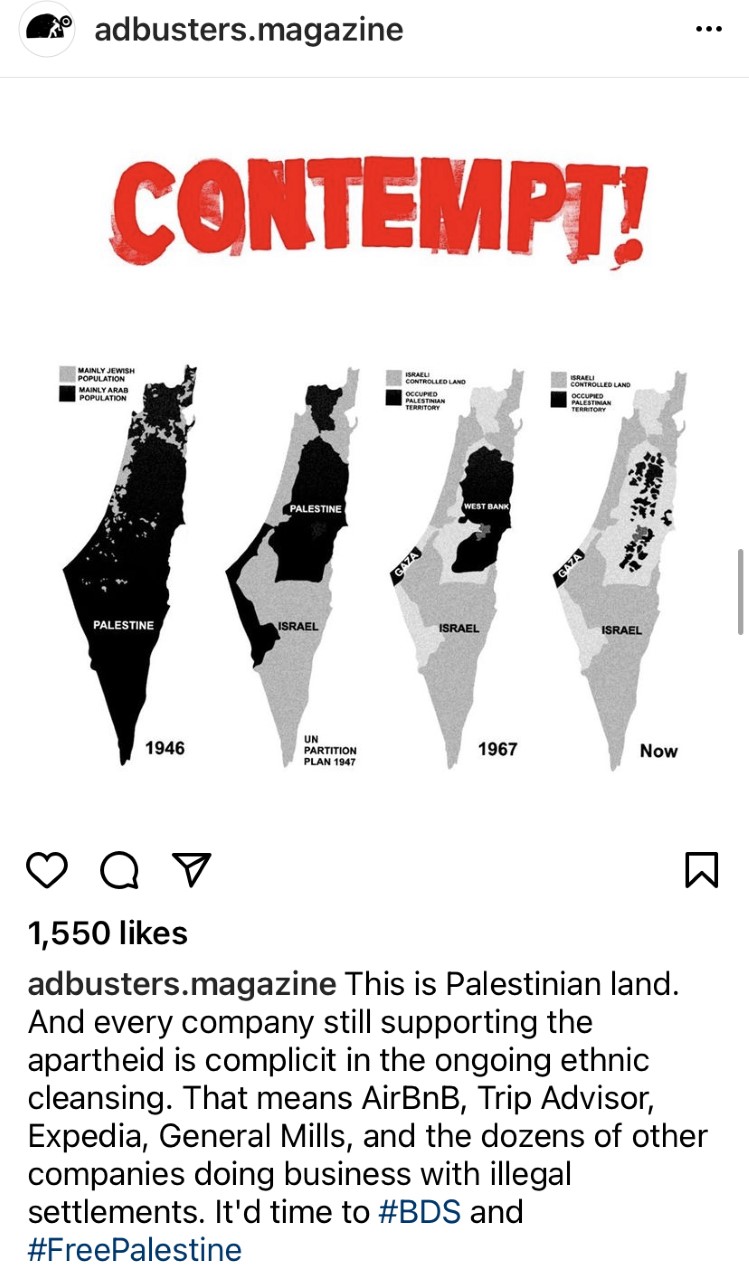 Shockingly, drawing moral equivalences between Hamas terrorists and Israel isn’t the lowest that Adbusters has sought to stoop to recently – that would be the lionizing of Marwan Barghouti, a convicted terrorist serving multiple life sentences in an Israeli prison for orchestrating the murder of Israeli civilians. In its March/April issue, Adbusters referred to Barghouti as the “Palestinian (Nelson) Mandela.” 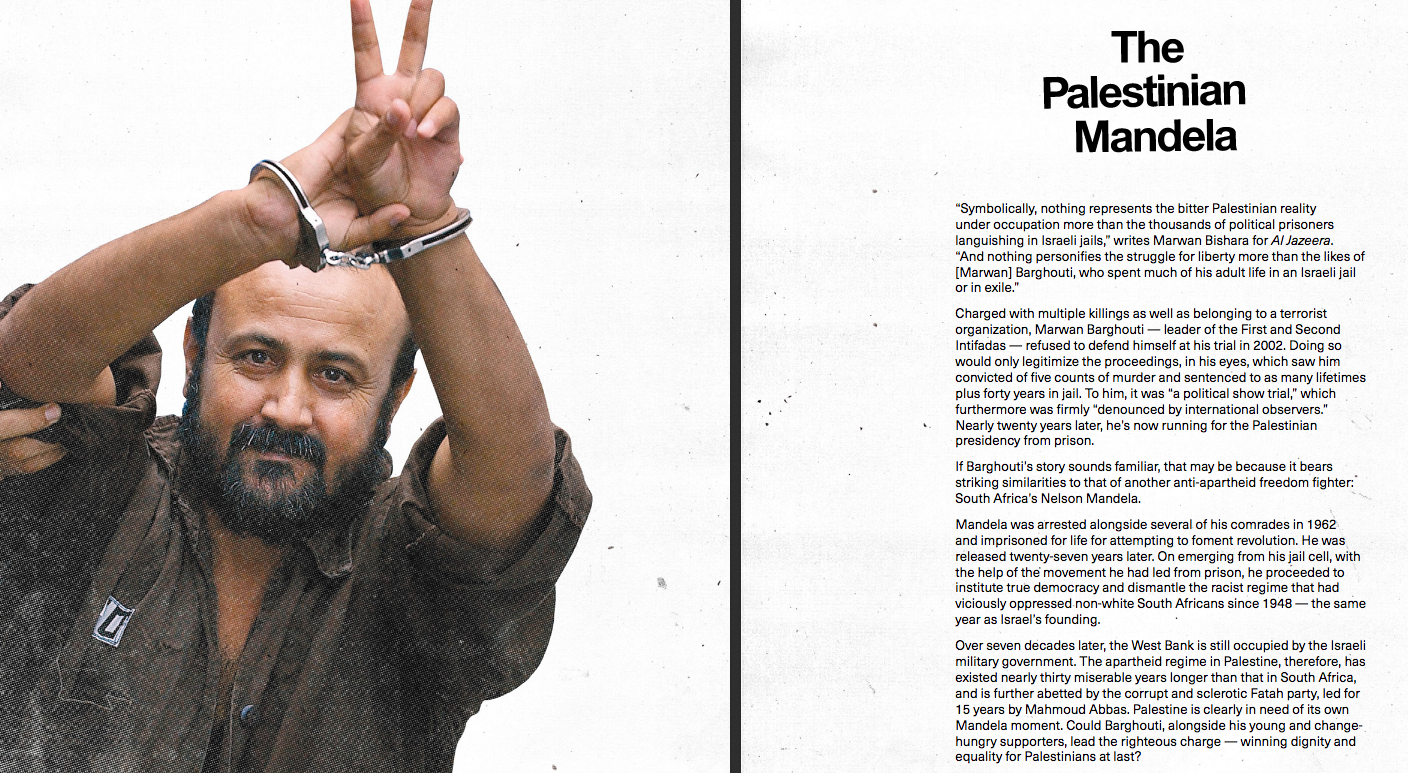 Mandela fought for the civil rights of Blacks in South Africa; Barghouti assisted in the murder of Jews. Comparing them is an insult to the memory of anyone who fought Apartheid South Africa.

While the magazine attempted to portray Barghouti as little more than a political prisoner, there is no doubt that he has the blood of countless Israeli civilians on his hands, having been leader of Tanzim, a group which orchestrated suicide bombings targeting innocent Israelis and who was convicted for his role in the premeditated murder of five innocents.

There is a point when reasonable disagreements over Israeli policies morph into outright incitement and inflammatory hate, and Adbusters has apparently taken this mantle with pride, announcing in a recent article in its April/March edition, Editor Kalle Lasne asserted that that “If Israel’s propaganda machine accuses us of antisemitism, instead of hedging and retreating…we’ll just give them the finger.” 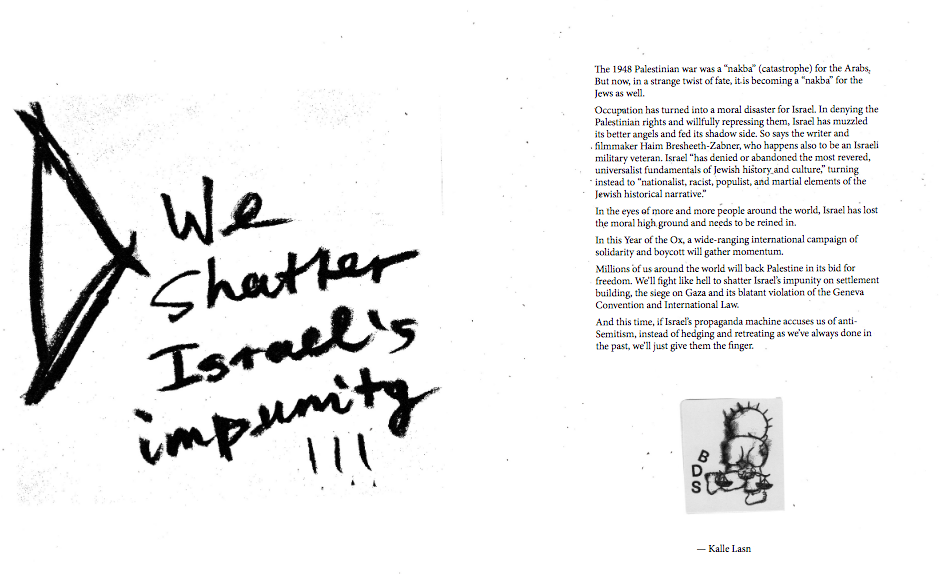 This level of callous disregard for the very real problem of antisemitism, where Jews are the number one targeted group for religiously motivated hate crimes in North America, is repulsive, but given this poisonous content published by Adbusters, not at all surprising.

If you are in a store that sells ‘Adbusters’ magazine:

DO take the magazine up the cashier and tell the clerk or the owner that the Magazine has been accused of producing hateful antisemitic content and walk away.

DO NOT damage the magazine in any way (damaging property is illegal) and DO NOT tell the owner to remove the magazine from the store’s shelves (while this material does not likely breach Canada’s hate laws, Canadians have the right to call it antisemitic and reprehensible).