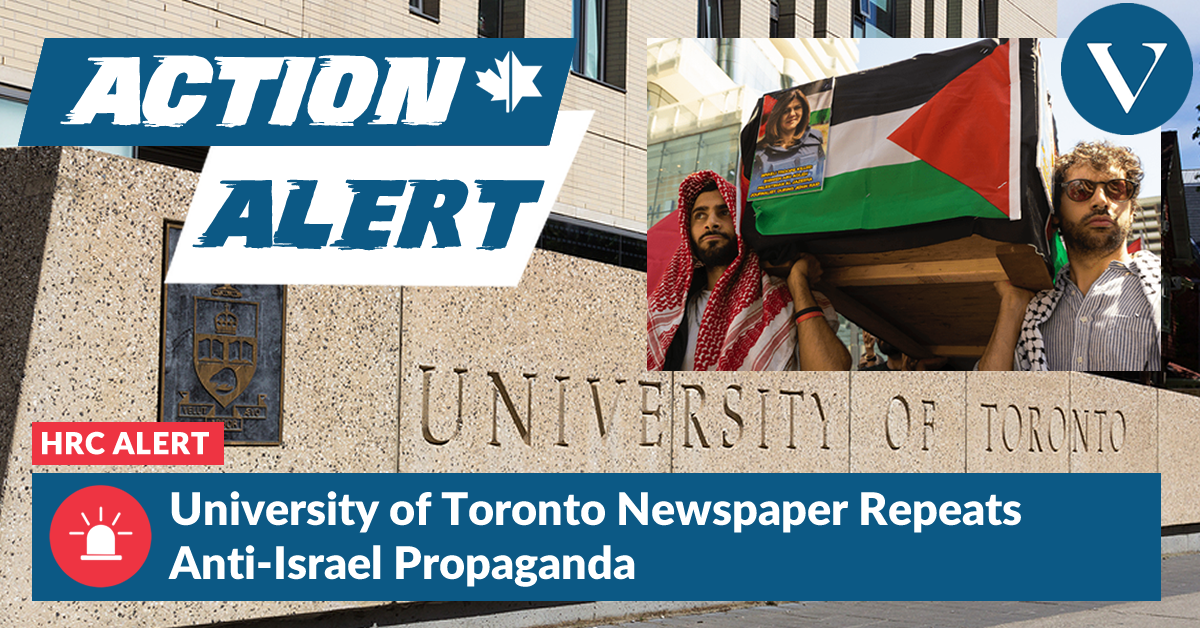 In May, as Israel celebrated its 74th birthday alongside supporters around the world who reveled in the Jewish State’s remarkable achievements, particularly in the face of tremendous adversity, a small but vocal group of anti-Israel protesters gathered to protest the country’s existence.

This protest was reported in a recent July 28 article in The Varsity, the University of Toronto’s student newspaper entitled: “’ Free, free Palestine’: In downtown Toronto, hundreds commemorate 74th anniversary of Nakba,” where Jadine Ngan, the paper’s editor-in-chief and author Caroline Bellamy, painted a skewed and one-sided version of the anti-Israel protesters’ claims in their reporting.

One of the first highly inaccurate phrases written by Ngan and Bellamy in their report was the statement that the Arabic word Nakba, which means catastrophe, “refers to the mass expulsion of at least 750,000 Palestinians from their homes during the 1948 Arab-Israeli war.”

To claim that 750,000 Palestinians were expelled from their homes during the 1948 war, is, for a number of reasons, fallacious.

Firstly, the war did not merely occur out of thin air; neighbouring Arab states planned and attempted to destroy the nascent State of Israel. Secondly, the estimated 750,000 Arabs who left Israel concurrent with the attempted Arab invasion of the country did so for a number of reasons. In fact, large numbers of Arab-Israelis left the Jewish State with the encouragement of Arab leaders, who assumed that the newly independent Israel would surely be soon destroyed, and the refugees could quickly return home. Thirdly, this misleading record expunges the reality that the very same Arab countries who attempted to destroy Israel in 1948 – and who bear responsibility for the 750,000 Arab refugees who left Israel – also forcibly expelled or otherwise hastened the departure of 850,000 of their own Jewish civilians.

Ngan and Bellamy also repeat a baseless claim about Israel’s history and the state of Palestinian refugees today, when they write that “Decades later, Israel continues to illegally occupy Palestinians’ (sic) ancestral lands, and prevents Palestinians and their descendants from returning. As a result, they remain displaced and stateless… one-third of those refugees live in registered refugee camps located in neighbouring countries, which generally have poor socio-economic conditions and inadequate infrastructure.”

As HonestReporting Canada has pointed out before, it is an ahistorical falsehood that Israel is an illegal occupier of Palestinian land. The Jewish People possess extensive legal title to the land and have had a continued presence in the Land of Israel for three thousand years. To claim that this ongoing existence reflects nothing more than illegal occupation is a distortion of the truth.

Additionally, Ngan and Bellamy’s claim that Israel prevents Palestinians and their descendants from returning, thus condemning them to refugee camps in poor condition, is without foundation. Israel bears no responsibility, moral or otherwise, to admit millions of individuals who are descendants of those who left Israel nearly 75 years ago as the Jewish State fought a defensive war against annihilation. Not only would such an influx spell the end of Israel as a Jewish state, it would be an impossible logistical task.

After World War Two, there were roughly 40 million refugees across Europe, and Displaced Persons (DP) camps were able to effectively re-house refugees because it was a priority. Today, third and fourth-generation Palestinians live in refugee camps in the Middle East, not because it would be impossible to re-house them, but because their existence serves as a powerful propaganda tool against Israel on the part of Arab countries, who evidently see no need to find them suitable housing when Israel can be blamed for their predicament instead.

Today, Palestinian refugees, or more accurately, the descendants of Palestinian refugees, are fortunate enough to have their own United Nations agency dedicated exclusively to their cause, making them the only group in the world with such an arrangement. If these descendants languish in squalid refugee camps, it is entirely the responsibility of the Arab states who attempted to destroy Israel; to take care and to re-house them.

More than seven decades after Israel gained independence from the United Kingdom, and when Israel survived – against all odds – a vicious onslaught by neighbouring Arab countries, the country has managed to become not only a beacon of liberal democracy but a growing technological powerhouse.

Should the Palestinians’ supporters in the West ever demand accountability and responsibility on the part of the Palestinian Authority (PA) and Hamas, perhaps the Palestinians will enjoy their own independence and success, too. But as long as such self-reflection takes a backseat to historical revisionism, sadly such progress will likely never happen.

Take Action Now: The Varsity’s recent report on an anti-Israel rally in Toronto uncritically repeated many false claims, including that Israel illegally occupies Palestinian land, that Israel is responsible for Palestinian refugees, and that Israel forcibly expelled Palestinians in 1948. These claims are demonstrably false, and by reporting these claims as fact, The Varsity failed in its journalistic responsibility. Send letters to: editor@thevarsity.ca and refer to the paper’s July 28 article by Jadine Ngan and Caroline Bellamy entitled: “’ Free, free Palestine’: In downtown Toronto, hundreds commemorate 74th anniversary of Nakba.”