University Of Toronto Medical School Professor Publishes Damning Report On Faculty’s Antisemitism: Where Is The Outrage? 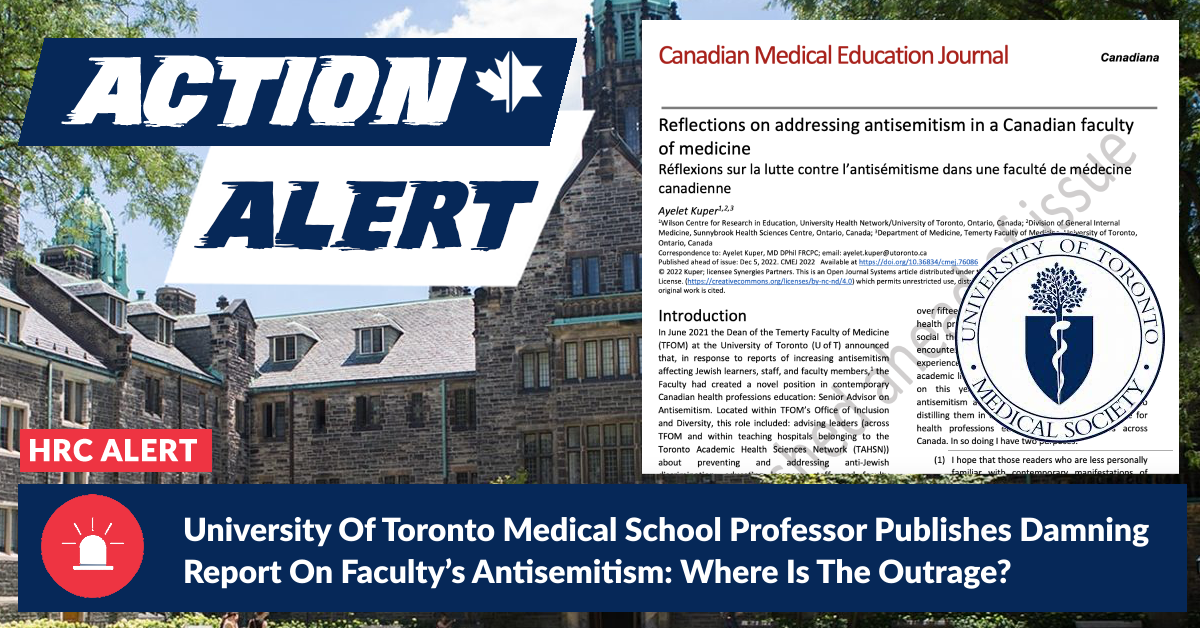 For years, universities have been cited as hotspots of antisemitic propaganda and hate, and a recent peer-reviewed paper is now shining a light at how Jew hatred is pervasive at Canada’s largest university, and at its medical school, in particular.

In a paper published in the Canadian Medical Education Journal on December 5 entitled: “Reflections on addressing antisemitism in a Canadian faculty of medicine,” Dr. Ayelet Kuper, Associate Professor at the University of Toronto’s Temerty Faculty of Medicine (TFOM), outlined the persistent and wide-spread incidents of Jew-hatred in the university’s medical school.

In her paper, Kuper cited the May 2021 conflict between Israel and Hamas, the Gaza-based Islamist terrorist group, as an illustrative example of the interplay between antisemitism and anti-Israel propaganda.

“I was told dozens of times that the current environment of growing antisemitism at TFOM was triggered by the war in Gaza in the spring of 2021, which implies (as was sometimes said to me explicitly) that the cause of TFOM’s  ‘antisemitism  problem’ is Israel’s government  policy,” Kuper writes in the journal article, correctly identifying this accusation as “classic discriminatory victim-blaming.”

This is an extremely telling example of how antisemitism has been able to effectively masquerade as legitimate criticism of Israeli government policy.

While Israeli actions and policies are surely open to vociferous debate and critique, holding Jews accountable for the actions of the Israeli government, or accepting that antisemitism against Jews as a result of Israel’s actions is somehow a fait accompli, is entirely unacceptable.

In her journal article, Kuper also points out how the concept of Zionism has been co-opted by those seeking to delegitimize Israel’s right to exist. Kuper notes that the vast majority of Canadian Jews see connection to the State of Israel as an important part of their Jewish identity, and that “Zionism (as defined within the Jewish community) is thus a normative belief within the Jewish community…nonetheless, there are those at TFOM who have insisted (to me and others) that this term means various racist and hateful things, ranging from ‘hating all Muslims’ to ‘wanting to murder all Palestinians.’”

As Kuper articulates, Zionism in no way resembles discrimination or hatred against Muslims or Palestinians. Conversely, Zionism is the Jewish People’s movement for self-determination in the Land of Israel, the Jews’ historic ancestral homeland. And today, with the overwhelming majority of Canadian Jews seeing connection to Israel as important to their identity as Jews, to have hateful voices outside the Jewish community attempting to defame and malign this movement for Jewish self-determination is not legitimate criticism of Israel, but clear-cut Jew-hatred.

Antisemitism can manifest itself in any number of ways, and it is not always expressed in graffiti on synagogue walls or with Jews being verbally or physically assaulted. In fact, particularly in institutions of higher learning, antisemitism has often manifested as the delegitimization of the Jewish People’s right to self-determination, AKA Zionism, and more recently, in attempting to rob the Jewish community of the right to define antisemitism for itself.

Despite Kuper’s well-researched and cited journal article identifying deeply worrying instances of antisemitism at the University of Toronto’s medical school, so far it has received relatively little attention in the Canadian mainstream news media, save for a handful of articles covering the news.

Canadian Jews, according to Statistics Canada, are the country’s most targeted group for religiously-motivated hate crimes. And while acts of antisemitism in Canada have not manifested violently of the likes that they have in France or throughout the United States, it does not mean that news coverage of the issue is not warranted.

Kuper’s journal article is an indictment, not just of those who have expressed antisemitism at the Temerty Faculty of Medicine, but for those who have let it continue. Kuper’s expose is a vivid illustration of how antisemitism is increasingly masking behind the veneer of anti-Zionism, and it deserves widespread attention from policy-makers and members of the Canadian news media alike.