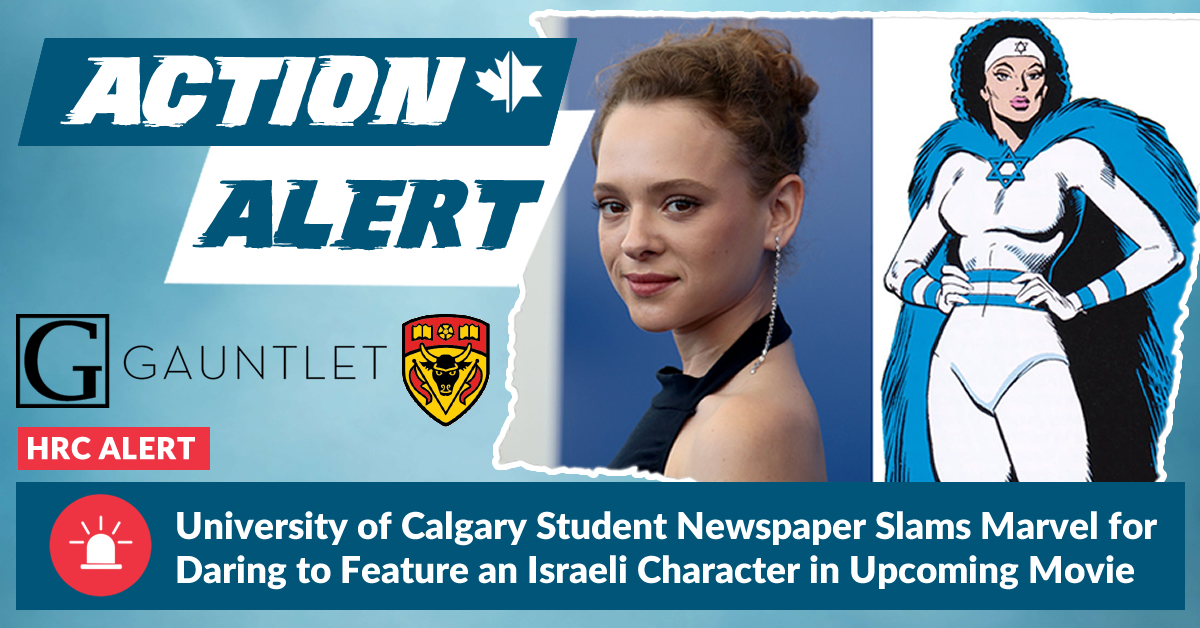 The anti-Israel movement frequently portrays itself as having no issue with Israelis, but rather with the Israeli government itself. But sometimes the veil slips, and they make clear that it is the Jewish State as a whole that they oppose.

In an October 5 opinion column in The Gauntlet, the student newspaper at the University of Calgary, writer Nazeefa Ahmed condemns the appearance of an Israeli character, Sabra, in the upcoming Marvel film “Captain America: New World Order.”

Ahmed’s rhetorical flourish cannot change reality: Israel is the polar opposite of a colonial power. The Jewish People, indigenous to the land of Israel, have lived in their homeland uninterrupted for three thousand years, despite repeated attempts to destroy their presence there.

With respect to Ahmed’s statement that Israel “oppresses a minority and denies them citizenship in their own homeland,” this is dramatically misleading.

More than two million Arabs today live in Israel, possess Israeli citizenship and enjoy full rights as citizens of the Jewish State. If Ahmed is referring to Gaza, the coastal enclave has been free of any semblance of permanent Israeli presence since 2005, when Israel withdrew all its citizens.

In Judea and Samaria, often called the West Bank, Israel has repeatedly offered a comprehensive peace plans to the Palestinian Authority (PA), which would have seen virtually the entirety of the area in question given to the Palestinians under full self-control. In 2000, then-Israeli Prime Minister Ehud Barak famously offered as much, only to be rejected and given a violent Palestinian uprising in response.

The vast majority of Palestinians in Judea & Samaria today live under the civil oversight of the Palestinian Authority, which is in charge of their education, healthcare, and more. To date, the Palestinian leadership has shown little interest in eschewing perpetual conflict with Israel, instead focusing on constantly inciting its population and funding terrorism.

It is extraordinary for Ahmed to claim that Israel can somehow occupy its own historic homeland, and deny the Palestinians self-determination, when in fact it is only the Palestinian leadership which can provide this by accepting Israel’s entreaties for peace.

Ahmed’s column also appears to be lacking in even the most basic of research, superficially and baselessly attempting to link the name of the Israeli character, Sabra, with unrelated events which occurred in Lebanon 40 years ago.

“The poorly-timed announcement of Sabra came days before the 40th anniversary of the Sabra and Shatila massacre of 1982… it struck a nerve with many that an Israeli superhero has the same name as some of the most tragic days of Palestinian history.”

There is zero connection between the character’s name and the Sabra and Shatila massacre of 1982, when militants loyal to Elie Hobeika, a Christian Lebanese soldier, massacred Palestinians in Beirut.

The word Sabra is a Hebrew term referring to any person born in Israel. Drawing parallels to a prickly pear cactus, which is prickly on the outside but sweet on the interior, it means to describe Israelis as tough on the exterior, but soft and gentle on the inside.

Ahmed is quick to defend her opposition to Sabra’s inclusion in the upcoming film, claiming that “Sabra is not problematic because she is Jewish.” However, this defence rings hollow.

Today, roughly half of the world’s Jews live in Israel, the land where Jews have lived for three millennia, and where their faith, culture and language blossomed. Writing off virtually fifty per cent of the entirety of world Jewry, and then blithely professing no opposition to Jews is akin to speaking out of both sides of one’s mouth.

According to the International Holocaust Remembrance Alliance’s (IHRA) working definition of antisemitism, which is the most widely-accepted definition among the Jewish community, denying the Jewish People the right to self-determination, and claiming that the State of Israel is a racist endeavour, is in fact an act of antisemitism.

Ahmed is free to oppose any actions of the Israeli government she chooses, but when she opts to oppose the entry of an Israeli character into a Hollywood film for no reason other than being Israeli, she is serving to delegitimize not just the State of Israel, but all Jewish connection to their historic homeland. Send your considered comments to The Gauntlet’s Editor-In-Chief, Sophia Lopez at: opinions@thegauntlet.ca. Please refer to Nazeefa Ahmed’s commentary: “MCU’s Sabra represents colonial power without consequence.”

Nazeefa Ahmed, a biased and ignorant of real facts on the ground individual. Typical of the “progressive left wing” students (obviously not real students) at so many universities. Influenced, I’m thinking” by a hate filled indoctrination at home and “woke” professors.