Israel Is An Imperfect Country, But A Vibrant...
Why Are Anti-Israel Activists So Afraid of The...
McGill Tribune Publishes Op-Ed Calling for a Boycott...
Ontario Arabic Paper’s Editor Downplays Holocaust; Meshwar Describes...
How the War in Ukraine is Having a...
Toronto Star Columnist Shree Paradkar Wrongly Claims IHRA...
After Vancouver Adopts IHRA, CBC Radio Interviews Fringe...
Qatar Prepares For The 2022 World Cup: Will...
Lawfare: Who is Using the Law More Effectively?...
Official Publication of the College of Physicians and...
Home Media Action Alerts2022 University of British Columbia (UBC) Student Government Releases Anti-Israel Rant; Gets Uncritical Coverage in Student Newspaper. 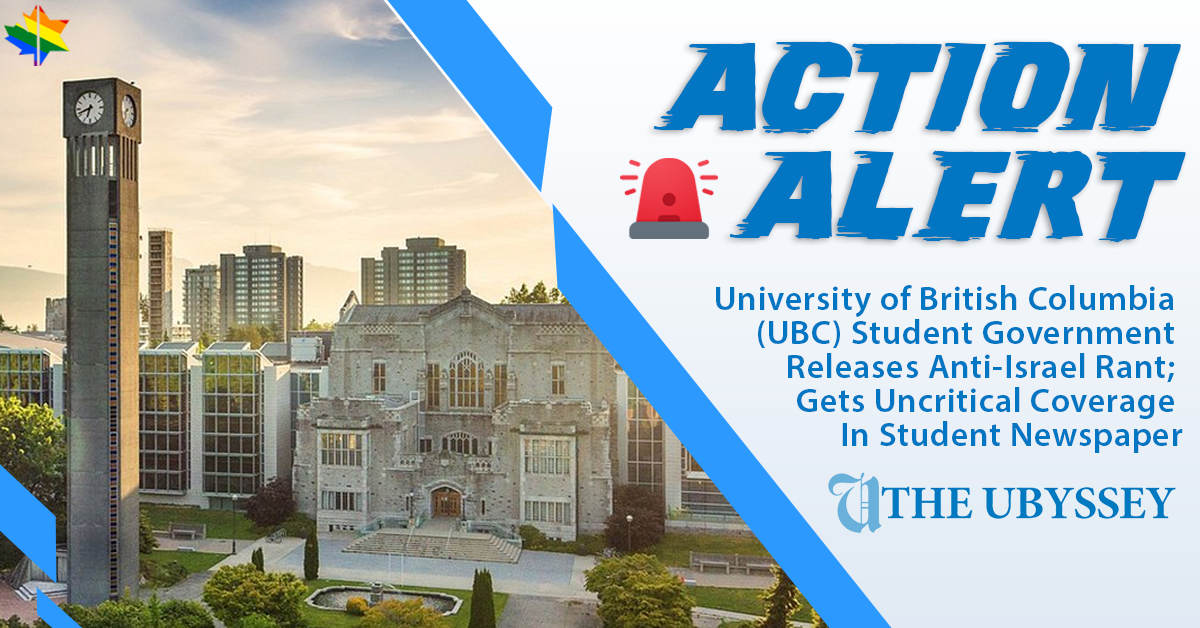 The academic year may have concluded on Canadian university campuses, but that hasn’t stopped one student newspaper from continuing to spread anti-Israel disinformation.

Both the AMS statement, written in support of a March 23 meeting which adopted the Boycott Divestment Sanctions (BDS) agenda against Israel, regurgitated uncritically by The Ubyssey, was riddled with factual errors, misinformation, and glaring omissions related to Israel and the Israel-Palestinian conflict.

For example, the Ubyssey quotes the AMS statement as reading: “The AMS denounces all systems of apartheid and oppression, and as such we condemn the Israeli State’s system of apartheid and its occupation of Palestine in the West Bank, East Jerusalem, the Gaza Strip, and the Syrian Golan Heights.”

Though this line of argumentation is popular in anti-Israel circles, it is not supported by the facts.

Israel in no way occupies the Gaza Strip, having fully withdrawn both its civilians and military personnel nearly 17 years ago, during the summer of 2015. As for eastern Jerusalem and Judea & Samaria (referred to by the AMS as the West Bank), Israel possesses full legal rights to these lands under international law. Contrary to widespread popular misconception, Israel possesses these rights as a result of holding sovereign title to the land, and by virtue of the fact that these lands were not part of the prior occupier, Jordan, or a Palestinian state. Israel, it should be noted, annex east Jerusalem in 1980.

As for the Golan Heights, its status as illegally occupied by Israel is extremely misleading. Not only has Israel controlled the plateau for more than twice as long as Syria, which possessed it for only 21 years as a sovereign state, Israel also took control of the Golan in 1967 in self-defence, after the Syrian regime attacked Israel during the Six Day War.

As reported by the newspaper, the AMS statement defended its advocacy of the BDS movement, stressing that it “stands with Palestinian students at UBCV (UBC Vancouver Campus), and the AMS condemns all systems of oppression, including but not limited to, apartheid, patriarchy, white supremacy, racism, Islamophobia, and antisemitism.”

While these words may be an attempt to sound conciliatory towards the university’s Jewish population by mentioning antisemitism, doing so while advocating for BDS is the height of obliviousness.

The BDS movement is not merely an expression of legitimate disagreement with Israeli government policies. It is an attempt to create and apply double standards against Israel not levied against other states, and an effort to silence and intimidate Jewish students into submission.

In fact, these fatal elements of the BDS movement – which are very much a function of design – are the reasons why UBC’s administration roundly rejected the anti-Israel recommendations made by the AMS in its March meeting.

In an April 12 press release, “Statement on BDS,” UBC’s President and Vice-Chancellor Santa J. Ono wrote that “the university does not support BDS and, therefore, cannot support the AMS motion to urge UBC and the Board of Governors to Divest,” as requested in the March 23 vote by the AMS.

While the Ubyssey does acknowledge the university administration’s rejection of BDS, it regrettably gives significant coverage to the AMS’ deeply problematic public statement. Additionally, the newspaper repeatedly refers to “the Israeli State,” an awkward but common phrase used by anti-Israel activists which is an attempt to delegitimize Israel’s right to be referred to by its chosen name.

Despite the repeated efforts of BDS activists to depict Israel as an “apartheid” state and illegal occupier of Palestinian – and in this case, Syrian – land, their rhetoric collapses under the weight of the truth. And while this has not evidently slowed the attempts by anti-Israel organizers, it is both noteworthy and very encouraging that UBC’s administration clearly recognizes the fallacy and dangerousness of the BDS campaign of mistruths, and that it rejected it so resoundingly.

The Ubyssey has the mandate to cover issues relevant to its student population, and it is certainly entitled to report on an AMS statement, even if is grossly false. But by not giving the proper, factual context, The Ubyssey tragically allows itself to be merely a re-publisher of AMS propaganda against Israel. Send a letter to the editor of the Ubyssey for its uncritical coverage of the University of British Columbia (UBC) Student Government’s anti-Israel rant. Send letters to: feedback@ubyssey.ca.