With great interest, HonestReporting Canada watched TVO The Agenda’s recent October 30 broadcast about the potential that may exist for “A Third Palestinian Intifada.”

At a time when Israeli civilians are being butchered, shot at, and run over by Palestinian terrorists in the streets of Tel Aviv, Hebron, and Jerusalem, there was nothing out of the norm for The Agenda to produce a segment with guests to analyze the situation. However, one guest, Khaled Elgindy of the Brookings Institute, utilized the platform he was given to spread malicious lies against Israel that went unchallenged.

To watch the complete program please click here or on the image below: 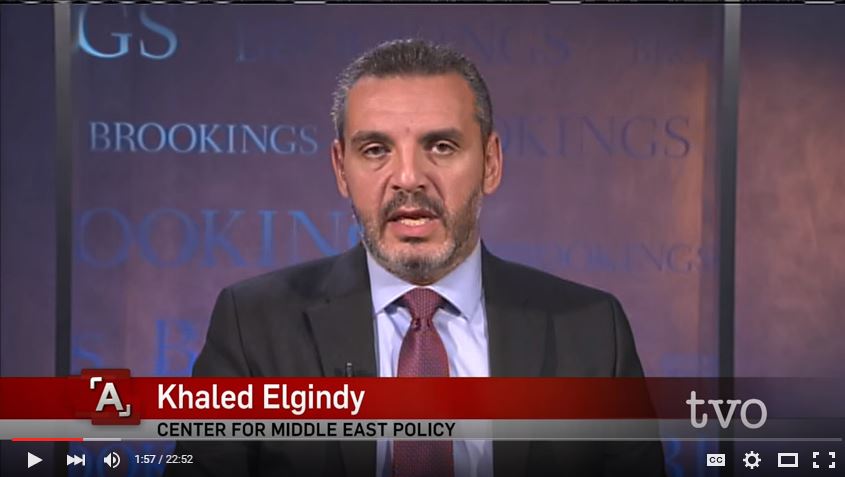 While Khaled Elgindy is entitled to his opinions, he’s not entitled to his own facts. Elgindy shamefully excused Palestinian terror by remarking “What we’re seeing these knifing attacks, fortunately, as terrible as they are, fortunately at least they are not using firearms we’ve seen that in the past, so at least there isn’t that escalation at this point.” Should Israelis be “fortunate” to be stabbed, to have their throats slit, and to be almost decapitated?

As well, Elgindy was complicit in spreading malicious lies against Israel in this recent conflict. Elgindy erroneously claimed that “You have 50 Palestinians who have been killed. Not all of them, in fact the majority of them are not attackers or stabbers or would-be terrorists. Most of them are simply protestors who are not armed or who just happen to be in the wrong place at the wrong time.”

In actuality, the Toronto Star reports that Israel contends that 44 of the dead Palestinians were killed for carrying out terror attacks that saw 11 Israelis murdered and hundreds injured. Israeli soldiers and civilians have acted in self defense to thwart these attacks and to subdue and if required, kill these attackers. In other words, the majority of the dead Palestinians were terrorists, not innocents as Elgindy would have you believe.

Secondly, Elgindy boldly lied when stating that “… Israeli police conducted an investigation into a Palestinian woman who was shot in the city of Afula, and they found that she was in fact not carrying any weapons, but the initial reports that she had a knife were false and that she was just simply executed for no reason.”

In fact, as Haaretz reports, the woman, Asra’a Zidan Abed, is an Arab-Israeli woman who was shot for brandishing a knife at the central bus station in Afula. It’s believed that she was suicidal and was hoping that Israeli soldiers would kill her. Israel’s soldiers thought the woman was a terrorist and let’s not forget the current climate in the region and that she was carrying a bona fide weapon in a public space filled with innocents. Finally, not only was she not “executed” as Elgindy claimed, but she lives and was treated by Israeli doctors for her injuries. She was charged for possessing a deadly weapon and is now in custody.

HonestReporting Canada (HRC) immediately contacted the Agenda and were initially assured that a “remedy” was being worked on. Cara Stern, a Producer at the Agenda, conveyed to HRC that Elgindy “agreed that he misspoke there” regarding the incident in Afula. He claims he meant to refer to another incident in Hebron.

Regretfully, The Agenda backtracked on its pledge to remedy the situation. HRC received the following email from Stacey Dunseath, The Agenda’s Executive Producer on November 4 sent to HRC Executive Director Mike Fegelman:

Thank you again for your email and for your interest in our program. The Agenda has a mandate to educate and inform and we take this very seriously. We don’t shy away from difficult topics, but we have a responsibility to provide balance and thoughtful debate. Given the concerns you raised about the program, and with our mandate in mind, I reviewed Friday’s program thoroughly to ensure that we had met our Promise to Viewers.

As you know, the program in question had guests representing two views on the possible intifada: Khaled Elgindy from the Brookings Institution (fellow in the Center for Middle East Policy) and Yoni Goldstein, editor in chief of CJN, The Canadian Jewish News. In a broader context, this is one piece of a wide array of content that The Agenda has produced covering all aspects of affairs in the Middle East.

Part of the debate included a discussion of recent incidents of violence in Israel. In the 23 minute segment, Mr. Elgindy referenced the shooting of a Palestinian woman in Afula, while in fact the location and incident he was referring to happened in Hebron. While he misspoke about the location of the incident, the point he was making was still valid commentary. Mr. Goldstein also disputed Mr. Elgindy’s characterization of the Palestinian individuals who had been killed as “protestors.” Additionally, many media outlets have reported on these incidents, and there seems to be no clear consensus on the number of actual “terrorists/protestors” (to use the language of the guests) among those Palestinians killed. This is not unusual for evolving situations where there are different accounts and perspectives. Accurate numbers are often difficult to come by. This is something that all media outlets grapple with in their reporting.

We consistently strive to ensure balance in our coverage. I’ve watched the item a fourth time and indeed, I feel we’ve accomplished what we set out to do. Mr. Goldstein and Mr. Elgindy laid out cogent arguments for both sides in the back and forth of the conversation. Both were respectful, and I feel it is worth noting that when Mr. Goldstein brought up President Abbas’ incitement of violence, Mr. Elgindy acknowledged that the Palestinians are not without blame.

If you look at how we’ve been covering this issue over a longer period of time, I think that you’ll find that we’ve provided multiple perspectives, thoughtful debate and insight into what is a very complex issue. Here are some examples:

Ari Shavit on his book “My Promised Land: The Triumph and Tragedy of Israel.”: https://www.youtube.com/watch?v=J42MexZPxsM

A debate on a one, two, or three state solution: https://www.youtube.com/watch?v=qs1mkgk5UfQ

And a series on the roots of the conflict: https://www.youtube.com/watch?v=PkKhNcJG5oU

Ms. Denseath’s reply is wholly unsatisfactory and The Agenda must make an effort to set the record straight in an upcoming broadcast of the program. Khaled Elgindy’s malicious lies claiming Israel “executed” an innocent unarmed Palestinian woman in Afula and that innocent protestors, not terrorists, constitute the majority, not minority of dead Palestinians, must be corrected. Please call on The Agenda to issue an on-air corrective immediately. Send emails to Stacey Dunseath, The Agenda’s Executive Producer at: sdunseath@tvo.org.