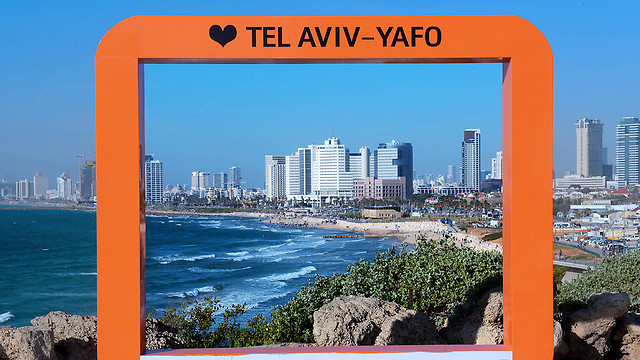 Tel Aviv is a dynamic, exciting, and thriving metropolis full of awesome cafes, scenic beaches, thriving start-up companies and people of all backgrounds who enjoy their lives.

But that’s not as far as TVO (TVOntario) is concerned. The most salient thing about the Israeli city of Tel Aviv is the victimization of Arab-Palestinians.

On August 12, TVO re-aired the program “The Life Sized City” hosted by Urban Design Expert Mikael Colville-Andersen. The program’s first season saw its fifth episode focus on Tel Aviv (the program was originally broadcast on TVO on October 8, 2017). You can watch the program in full on TVO’s website or by clicking on the image below: 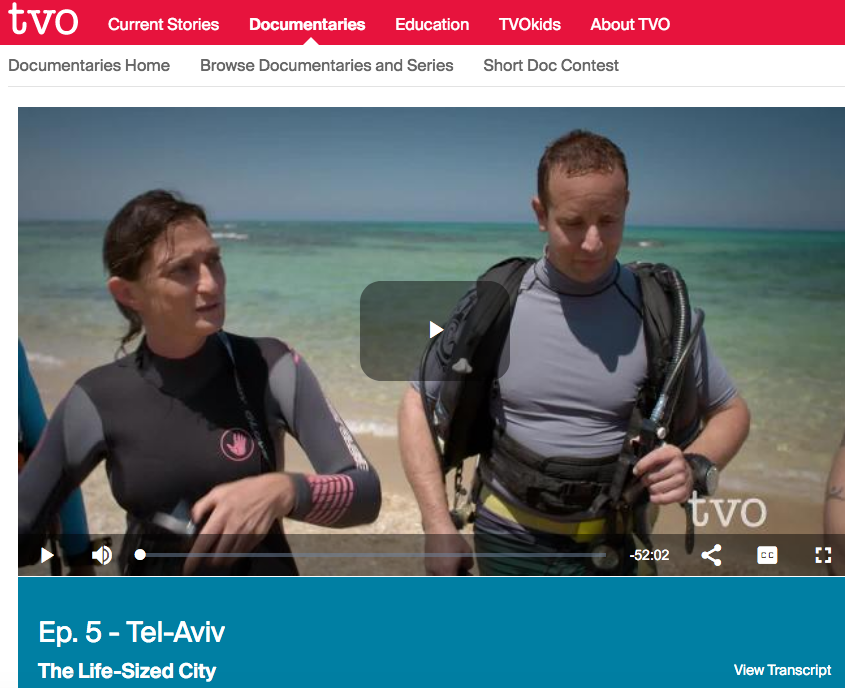 The show was advertised by TVO as follows: “Few modern cities evoke as much division as Tel Aviv, with its reputation as a laid-back and permissive party town in a hotbed of conflict and turmoil. The problems of a rising cost of living, deficient public transport, and development conflicts are often put aside in the face of cyclical religious and cultural struggles that have marked its complex history. But people from both sides of the political and cultural divide are working together to create a more functional and united city.”

Host Colville-Andersen promised at the introduction of this program to “look past the propaganda,” but ended up promulgating a series of mistruths about the Arab-Israeli conflict in his depiction of Israel’s second-largest populated city, Tel Aviv.

As Encyclopedia Britannica notes: “The word Palestine derives from Philistia, the name given by Greek writers to the land of the Philistines, who in the 12th century BCE occupied a small pocket of land on the southern coast, between modern Tel Aviv–Yafo and Gaza. The name was revived by the Romans in the 2nd century CE in “Syria Palaestina,” designating the southern portion of the province of Syria, and made its way thence into Arabic, where it has been used to describe the region at least since the early Islamic era. After Roman times the name had no official status until after World War I and the end of rule by the Ottoman Empire, when it was adopted for one of the regions mandated to Great Britain; in addition to an area roughly comprising present-day Israel and the West Bank, the mandate included the territory east of the Jordan River now constituting the Hashimite Kingdom of Jordan, which Britain placed under an administration separate from that of Palestine immediately after receiving the mandate for the territory.”

If you go to the Jewish Virtual Library (JVL) website, you’ll learn about the many nations and rulers who administered Jaffa. It was “conquered by King David, in sixth century BCE, Jaffa came under the control of the Phoenecians and then the Greeks. In the Hellenistic period, Jaffa quickly became a Greek city. In 38 A.D., In the roman period, Herod captured Jaffa on his way to Jerusalem to establish his reign there.”

Jewish life in Jaffa dates back to the second to fourth centuries. As Jewish Virtual Library notes, in the Arab Period (636–1099) Jaffa fell to the Muslims. In the Crusader Period (1099–1268) Jaffa was conquered by the Crusaders. In the Mamluk Period (1268–1517) the Mamluks destroyed the port of Jaffa and the ports of other coastal towns in order to prevent invasion by Christian warships. In the Ottoman Period (1517–1831) from the beginning of the 16th century until the mid-17th century, there was no change in the status of Jaffa. In 1799, Napoleon besieged the town and conquered it in a storm. JVL notes that “Arabs, both from Palestine and the neighbouring countries, particularly Egypt, settled in Jaffa throughout the 19th and beginning of the 20th century, causing the city’s population to grow from 2,500 (at most) in the early 19th century to 5,000 in the 1850s and to nearly 40,000 (with suburbs such as Tel Aviv included) in 1914. In 1909, a group of Jews from Jaffa decided that they wanted to leave the narrow crowded streets of the town. They bought a stretch of sand dunes north of Jaffa and called it Ahuzat bayit, which became Tel Aviv.”

In the Mandate Period in 1917, “Jaffa was occupied by the British Under the British Mandate, Jaffa recovered, expanded, and developed. Arab riots in 1921 spurred Tel Aviv’s growth, and it became a separate municipality under Meir Dizengoff. More riots in 1929 caused additional Jews to leave Jaffa for the safety of Tel Aviv. Soon Jaffa became a small village in comparison to the rapidly developing Tel Aviv area, which received city status in 1934. In 1950, Jaffa and Tel Aviv were officially combined into one city.  In the first stages of the war, the British authorities protected the city and prevented Jewish forces from occupying parts of it. On May 13, 1948, the city fell to Jewish forces, and most of its inhabitants abandoned it by sea. Large numbers of Jewish immigrants were housed in considerable parts of Jaffa, and on Oct. 4, 1949, the government of Israel decided to amalgamate Tel Aviv with Jaffa, which one year later were given the name Tel Aviv-Jaffa.”

Not satisfied for just contending that Jews usurped Palestinian-Arabs from Jaffa, Host Colville-Andersen committed historical revisionism by saying the following:

Fast forward to 1948, the creation of the new state of Israel triggered a mass exodus of the Arab population, and in 1950, Jaffa was annexed to Tel Aviv.”

In fact, Israel declared its independence in 1948 and the following day, the nascent Jewish state was attacked by five Arab armies seeking its destruction. Arab inhabitants in the area either fled on their own volition or at the behest of marauding Arab armies. (Arabs also assert that they were forcibly expelled by Israeli forces and Israel disputes this.) Importantly, the lion share of Arabs living in present-day Israel chose to stay in the newly formed state which was mandated for the Jewish people, or, they are the descendants of those who remained in Israel.

In this episode, the Host conducts a series of interviews with Israelis, Arabs and Jews alike. In his first interview, Host Colville-Andersen speaks to Omer Krieger, an Israeli artist who does politically-engaged performances.

Host Colville Andersen observes that: “Jaffa has more mosques than synagogues” and says that “… we’re here at the Gay Community Centre here in Tel Aviv. How much of this enthusiastic embracing of LGBT culture is real, is there a lot of pink washing or is it really an authentic part of Tel Aviv culture?”

Omer Krieger answers by saying: “Tel Aviv and Israel, they like to show themselves as tolerant places, which they may be and they are, I think it’s overlooking some aspects that are more restrictive and regressive. The occupation of Palestine, so there are millions of people living under the Israeli regime with two parallel legal systems and a military presence on the streets. That’s the horrible reality that we are responsible for as Israeli citizens. In Tel Aviv, from time to time, you see those helicopters going down to Gaza on the coast….” 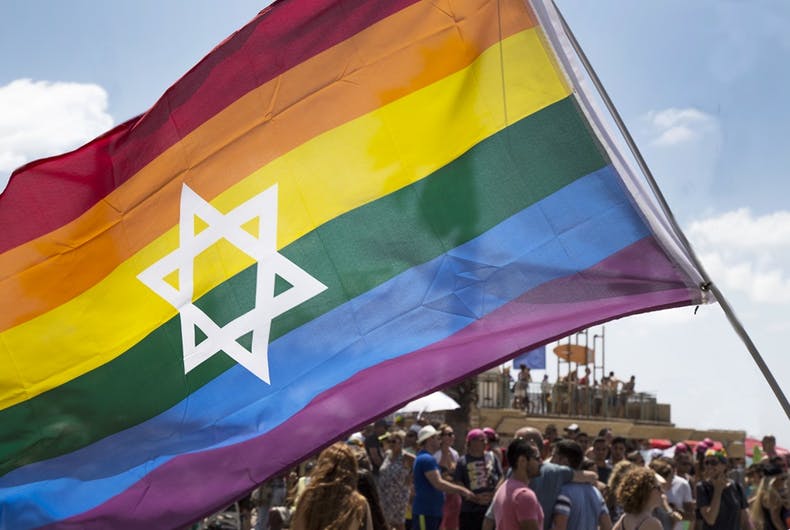 In one fell swoop, Israel is accused of pinkwashing (when anti-Israel detractors accuse the Jewish state of asserting its pro-LGBTQ credentials to mask the so-called “occupation” of “Palestine” and treatment of Palestinian-Arabs). Ironically, just this week, the Palestinian Authority banned LGBTQ activities in the west bank promising that police will pursue LGBTQ groups and individuals. Importantly, Israel remains the number one destination for Arab LGBTQ individuals to escape persecution. Naturally, there was no mention in this program of the Arab-Palestinian initiated terror violence that requires a vigilant and robust Israeli military presence.

In the program, Host Colville-Andersen tacitly accuses Israel of ethnic cleansing by saying that due to “gentrification” in Jaffa, the Arab memory is being “wiped out”.

Absurdly, the TVO-aired program didn’t even try to hide its Pallywood-like production which was on full display when an interview source named Ibrahimm Abu Shindi, the Director of the Arab-Jewish Community Centre, directs other Arabs in Arabic to talk about how rich Jews are buying up homes in the Arab-stronghold of Jaffa.

Ibrahami Abu Shindi: “This is Ajami and we’re on Sha’arei Nikanor Street. It’s a Jewish name, most of the streets were given Jewish names. You can see an Arab family here. As you can see, it’s a very poor place. They live here. They can come here and say: ‘Take 2 or 3 million dollars and leave.’ Then they build something like that. They renovate something like that. Once, 90 percent of the people in Ajami were Arabs, Palestinians. 10 percent were Jewish people. Now, we’re talking about something like 85-90 percent of residents are Jewish people. They are very rich families. All of the nice places you can see belong to the Jewish families.”

Ibrahim then greets an Arab neighbour and says: “How are you doing? This is Canadian television. Talk to them about the neighbourhood and how rich people are buying the houses.”

The neighbour obediently says: “This land is sold.” 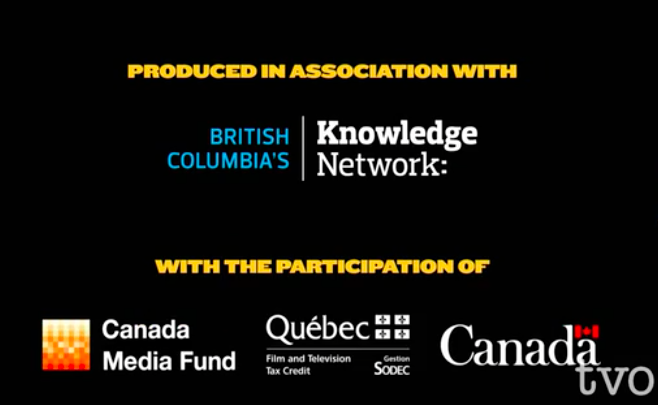 Ibrahim says: “It is? They already sold this place and they will build a building here, you know? They are sitting outside, the youth gathers in public spaces.”

The antisemitic trope of the nefarious influence of wealthy Jews dispossessing Arab-Palestinians is unmistakable and it’s nauseating.

What’s especially troubling is that, as TVO acknowledges, it’s “a public agency and a registered charity, our work is made possible through the prudent stewardship of public funds and the generous support of tens of thousands of donors every day.”

Alas, TVO’s re-broadcasting of this program which depicted the Israeli city of Tel Aviv as the epicenter of the victimization and dispossession of Arab-Palestinians was beyond the pale. HonestReporting Canada encourages you to file a complaint with TVO directly by visiting its website contact page.