Make no mistake, whether in Toronto or in areas of the west bank, terrorists and criminals will not receive sanctuary and immunity when they hide and recuperate in hospitals.

Canadian security services, like Israeli forces, will do everything in their powers to prevent, disrupt and bring those responsible for attacking innocent civilians to justice, as was the case in the recent Israeli arrest raid of a 20-year-old Palestinian terrorist – a man who stabbed an Israeli civilian – by undercover Israeli forces in Hebron recently. 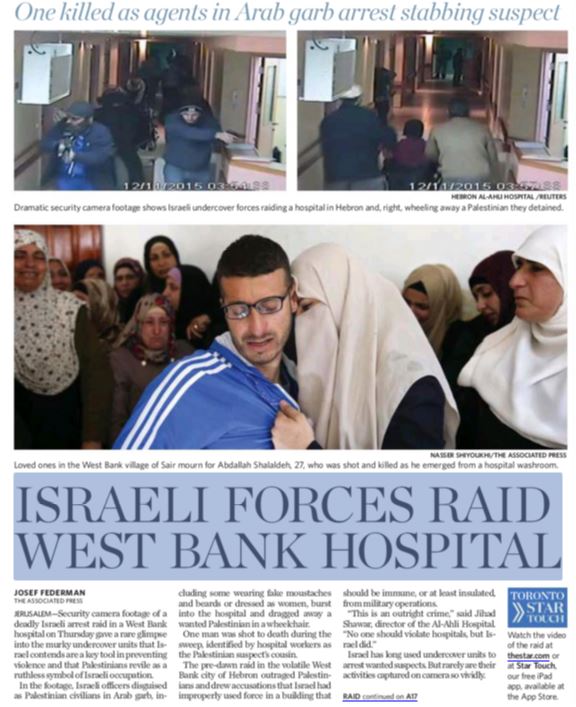 What was omitted in the Star’s November 13 front page coverage was how the one person killed by Israeli forces during this raid, Abdallah Shalaldeh, was a known Hamas 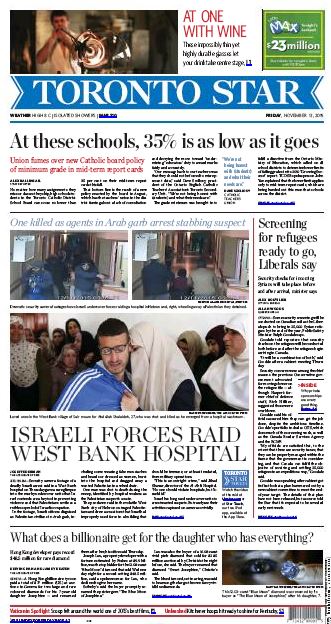 operative who attacked Israeli forces who in turn responded in self defence. All readers were told was how “loved ones” had “mourned” Shalaldeh, a man Canada recognizes as a bona fide terrorist. Equally troubling was how the Star used a photo on its front page showing grieving Palestinians in a seemingly obvious attempt to draw sympathy to their plight.

Importantly, Israel has to take these necessary measures as Palestinian security forces, government and society give safe harbour and honour these terrorists.

While the Star gave front page coverage to this Israeli raid in a seemingly transparent effort to paint Israel in a negative light, in sharp contrast, the Star featured an article about the recent ISIS suicide bombings in Beirut which killed 43 people and injured 240 people, at the 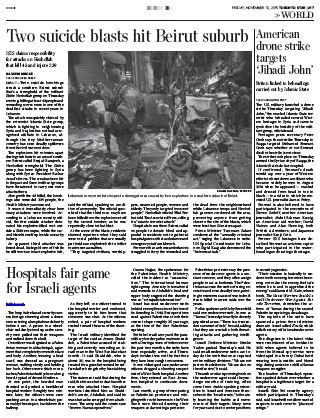 end of its front section.

While we’re conscious that the Star did not author this report (the Associated Press wire service did), for readers who only read the front page (headline, sub-headline, 3 photos and captions, and article itself) and didn’t continue on to page A17, these readers had no way of knowing that the individual who was killed was a Hamas terrorist who Israel claims attacked its forces. This was vital context that was not telegraphed to Star readers on the front page, the most prime real estate of the publication.

Arguably, many Star readers concluded that an innocent Palestinian man was shot to death during an Israeli arrest raid on a Hebron hospital. In fact, by Canadian law he’s a terrorist and so was his cousin, a man who stabbed an innocent Israeli.

HonestReporting Canada communicated these concerns to Toronto Star Public Editor Kathy English who has committed to sharing our concerns with the Star’s newsroom. To add your voice to our concerns and to complain about the Star’s biased coverage of this Israeli raid on a west bank hospital, please send a letter to the editor to the Star at: lettertoed@thestar.ca.