(See Bottom of this Article for Update)

HonestReporting Canada filed a formal complaint with the Toronto Star regarding a January 30 article by Oakland Ross which claimed that a 2009 Israeli invasion of Gaza was meant to “punish” Palestinians, not simply to thwart the thousands of rockets and mortars which were fired on Israeli cities like Sderot and Ashkelon at the time.

“Known to Israelis as Operation Cast Lead, the invasion sought to punish Palestinians for almost daily rocket fire from Gaza into southern Israel. The operation claimed more than 1,400 Palestinian lives, many of them civilians, including three of Abuelaish’s daughters and a niece. Thirteen Israelis also died.”

As we told the Star’s Public Editor, Kathy English, this statement is patently false. The declared aim of Operation Cast Lead (OCL) was designed to combat the daily Palestinian rocket and mortar fire shot by Gaza-based terrorists. OCL was not carried out as a means to “punish” Palestinian civilians for rockets fired by terrorists; what the Palestinian government, media, NGO’s, etc. contend was a form of “collective punishment” – a claimed violation of international law.

Ross’ statement is highly prejudicial and inaccurate, and was not made in attribution. Additionally, with regards to the tragic circumstances that saw the deaths of three daughters of Palestinian doctor Izzeldine Abuelaish, and his niece, Star writer Oakland Ross did not include adequate context about the incident in question. Both the Jerusalem Post and the New York Times reported the following about the incident (emphasis added):

“The IDF concluded Wednesday that Israeli tank shells caused the deaths of four Palestinian girls, including three daughters of Dr. Izzeldin Abuelaish, when his house was accidentally attacked on January 16, during Operation Cast Lead. Following the investigation, the army confirmed that two shells had hit the building. The findings were presented to and approved by OC Southern Command Maj.-Gen. Yoav Galant and Chief of General Staff Lt.-Gen. Gabi Ashkenazi. The IDF said that a Golani Brigade force was operating near Beit Lahiya when it came under sniper and mortar fire in an area laden with explosives. After determining that the source of the fire was in a building adjacent to Abuelaish’s home, the force returned fire. 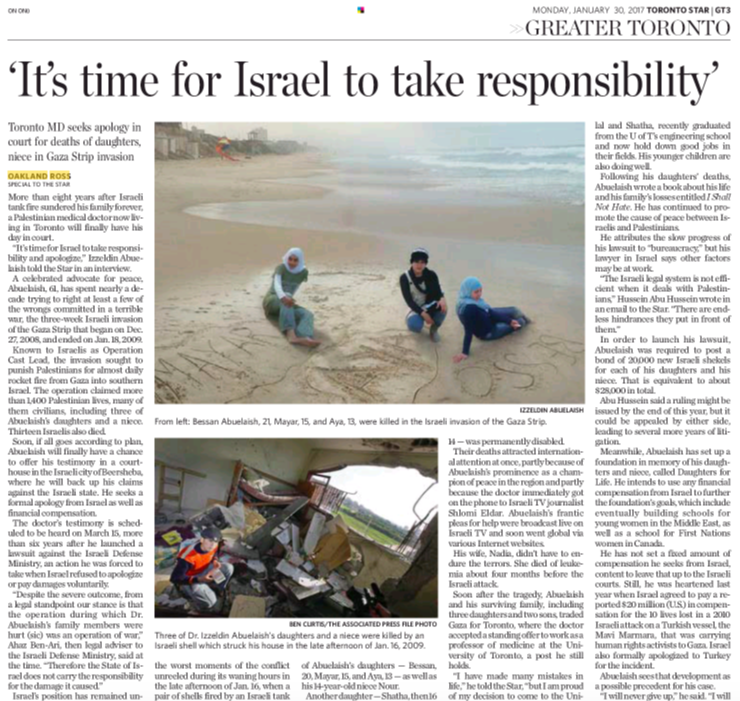 While the IDF was shooting, suspicious figures were identified in the top floors of the doctor’s house, and the troops believed the figures were directing the Hamas sniper and mortar fire, the army said. Upon assessing the situation in the field while under heavy fire, the commander of the force gave the order to open fire on the suspicious figures, and it was from this fire that his three daughters were killed, said the IDF. Once the soldiers realized that civilians, and not Hamas gunmen, were in the house they ceased fire immediately, continued the army. Three of the doctor’s daughters – aged 20, 15 and 13 – and a niece were killed on the second floor.”

“… The IDF said it regretted the incident and the loss of life, and that the doctor had been updated with details of the investigation as well. Considering the constraints of the battle scene, the amount of threats that endangered the force, and the intensity of fighting in the area, the investigators concluded that the forces’ action and the decision to fire towards the building were reasonable. Abuelaish, speaking on Channel 2 Wednesday, thanked all those who worked to find the truth about the incident and accepted the findings, saying that mistakes can happen. “In a message broadcast on Israeli television Wednesday, Abuelaish, speaking in Hebrew, thanked the Israelis for carrying out an honest investigation and said he hoped that such a mistake would never be repeated.”

The only context referenced by the Star and writer Ross was the following: “’Despite the severe outcome, from a legal standpoint our stance is that the operation during which Dr. Abuelaish’s family members were hurt (sic) was an operation of war,’ Ahaz Ben-Ari, then legal adviser to the Israeli Defense Ministry, said at the time. ‘Therefore the State of Israel does not carry the responsibility for the damage it caused.’”

In 2009, HRC prompted the Toronto Star to issue a clarification to an Oakland Ross report which had falsely claimed that the Israeli tank fire on the Abuelaish’s home was “apparently deliberate”.

HRC has called on the Star to take corrective action in regards to Mr. Ross’ January 30 article and to remedy the situation. Stay tuned to this page for future updates.

Today, Toronto Star Public Editor Kathy English replied to our concerns saying that the Star does not agree that any clarification or revision is called for. Here’s the text of Ms. English’s reply sent to HRC Executive Director Mike Fegelman (emphasis added):

Dear Mike: We have looked at your concerns and do not see not see need for corrective action on the Star’s part. As always, if you wish to submit a letter to the editor to make clear your views, please do so. We believe the history of this event is clear that Operation Cast Lead was intended to deter Palestinians from firing rockets at Israel. While “deter” may well have been a better word choice, we believe the use of the word “punish”  is within the mainstream of public discussion of this issue and is not a clear inaccuracy.  We note that Gideon Levy, a respected Israeli journalist has written a book entitled The Punishment of Gaza  examining Israel’s operations in Gaza from 2005 on and focusing on the 2008-2009 operation. As for your secondary concern, this is a story about Dr. Izzeldin Abuelaish’s long legal battle whose outcome has yet to be determined by the courts.  We think this article provides adequate balance in quoting Ahaz Ben-Ari, the legal advisor to the Israeili Defence Ministry and making clear  that Israel’s official position has not changed since he made his statements.

HRC replied by reiterating our request that the Star amend this sentence and issue a clarification notice as the Star itself acknowledged it could have been better phrased. Mr. Ross should have stated the following:

“Known to Israelis as Operation Cast Lead, Israel claims the invasion sought to thwart the almost daily rocket fire from Gaza into southern Israel. The operation claimed more than 1,400 Palestinian lives, many of them civilians, including three of Abuelaish’s daughters and a niece. Thirteen Israelis also died.”

As is, the Star is claiming (without foundation, lacking attribution and using only conjecture) that the operation was meant to “punish” Palestinians (reasonably interpreted as “punish(ing)” Palestinian civilians and infrastructure), and that it was not to thwart the persistent Palestinian terror attacks. This is a major distortion of the truth.

With regards to Gideon Levy, while Ms. English refers to him as a “respected Israeli journalist” he is reviled by mainstream Israelis and supporters of Israel for his frequent demonization of the Jewish state. Mr. Levy, it should be pointed out, is a columnist who writes a regular opinion commentary vs. Oakland Ross who’s tasked to produce neutral and objective reportage.

As to the Star’s lack of context in regards to the incident at the Abuelaish’s, HonestReporting Canada maintains its position that the Star’s report lacked adequate context about the incident and Israel’s claims.