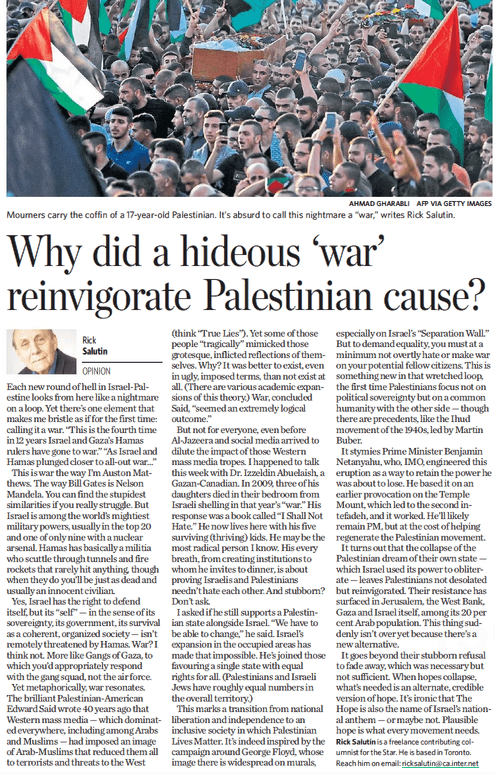 Writing from his comfortable perch far away from the Mideast conflict in Toronto, Rick Saluin, a columnist for the Toronto Star, claimed today that Israelis aren’t even “remotely threatened by Hamas” which is “basically a militia who scuttle through tunnels and fire rockets that rarely hit anything…”

To wit, Hamas just fired 4,000+ deadly rockets at Israel which killed 12 people, including two children and who maimed hundreds more. If it weren’t for Israel’s Iron Dome missile interceptor, early warning sirens and bomb shelters, there would have been a massacre(s).

Furthermore, while there’s a virtual consensus for a two-state solution to resolve the Israeli-Palestinian conflict, the “one-state solution” referred to by Salutin is being insidiously sold in the language of peace.

At its most basic level, the one-state solution denies the right of Jews to self-determination in their historical homeland and calls into question the very legitimacy of Israel as a state. A bi-national state would have the same consequence as the “right of return” – the negation of Israel as a Jewish state. Palestinians, by virtue of a higher birthrate, would turn Jews into a minority before voting in favor of another Muslim Arab state in place of Israel.

The one-state solution is therefore a thinly veiled strategy for destroying the State of Israel and questioning its very right to exist.

Send a letter to the editor to the Toronto Star to rebut Rick Salutin’s efforts to sanitize the dangers of Hamas terrorism and promote the one-state solution. Send letters to: lettertoed@thestar.ca