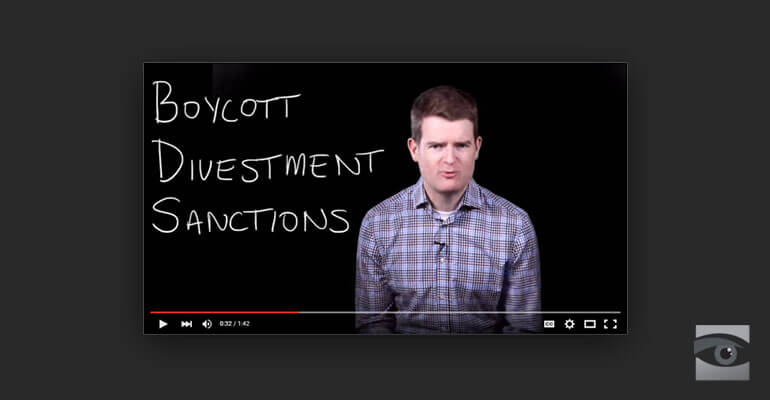 (This communique is authored by HonestReporting.com associated editor Zahava Raymond)

His latest video is another failed attempt that sacrifices the truth for a lame attempt at comedy.

Vrooman suggests that the BDS movement can’t possibly be antisemitic because, as he sarcastically comments, it is supported by “thousands of apparently antisemitic Jewish people.” This absurdly implies that if a Jew shared the exact same views of a non-Jewish antisemite, the Jew could not be accused of antisemitism. This also ignores the fact that BDS, by its very nature, encourages antisemitism irrespective of the background of those supporting it.

In his accompanying blog post featured on the anti-Israel site Rabble.ca that includes the text of the video, Vrooman links to Jewish Voice for Peace, a fringe organization that has acknowledged that it purposely uses its claim of Jewish identity to deflect accusations of antisemitism against anti-Israel activists that would weaken their standing. JVP has demonstrated its opposition to Israel’s very existence, and has also perpetuated the inflammatory Palestinian allegation that Israel is threatening the al-Aqsa mosque, one of the justifications made by Palestinians  for attacking Israeli civilians.

For Vrooman, ignorance is bliss, as he naively states that the BDS stance is in line with official Canadian policy as they both:

believe the occupation of Gaza and the west bank, and settlements there, are illegal, and both want rights and a state for Palestinians.

What he is unaware of – or chooses to ignore – is that the BDS movement has made it very clear that it wants a Palestinian state that replaces the Jewish state, not one alongside it (and, importantly, Israel doesn’t “occupy” Gaza and its presence in the territories is disputed.)

He states that while Canada ignores Israel’s “criminal behavior,”

The BDS movement is trying something that might actually work: punishing it.

It is true that the BDS movement is punishing Israel, not for its “criminal behavior,” but rather for its very existence and for daring to act in self-defense against terrorism, which BDS supporters tend to ignore, when they’re not outright supporting it.

Vrooman, questioning Israel’s democratic credentials, states “a democracy doesn’t rule over a group of people who aren’t allowed to vote.” Vrooman is clearly confused. Palestinians who are not citizens in Israel have the right to vote in Palestinian elections (if they decided to hold them – Abbas is currently in the 11th year of his 4-year term), have access to Palestinian social services, and have Palestinian laws enforced by the Palestinian police. And, of course, Israeli Arabs vote in Israeli general elections and Arab parties and politicians serve in the Israeli Knesset.

Vrooman, removing any context, uses an IDF commander’s quote about the 2006 Lebanon War to accuse Israel of bombing civilians indiscriminately. Israel does not target civilians. Period.

He claims the real danger of the BDS movement is that

It threatens to change the story of Israel from a poor little nuclear power that just wants peace, to a story that actually reflects reality.

In fact the danger of BDS is that the reality it wishes to promote is the end of Israel as a Jewish state.

Let’s see Vrooman try and put all that into a video and make it funny.