By now you may have heard about how a Palestinian doctor working from Canada, Dr. Izzeldine Abuelaish, has called on the federal government and Toronto-area hospitals to treat 100 injured Gazan children. 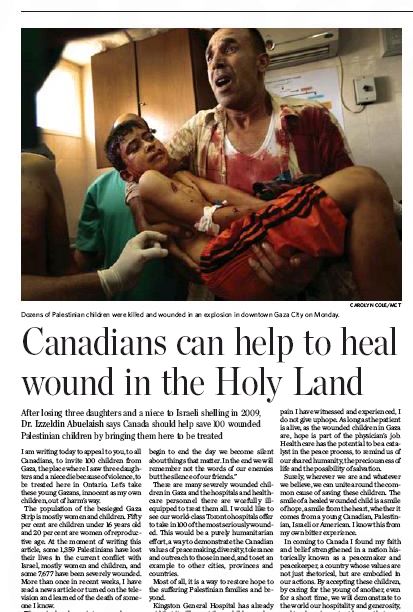 Dr. Abuelaish wrote an op-ed in the Star on July 30 advocating that these efforts be undertaken and which at the same time maliciously claimed that the majority of dead Gazans were woman and children. Dr. Abuelaish said the following in his op-ed: “At the moment of writing this article, some 1,359 Palestinians have lost their lives in the current conflict with Israel, mostly women and children, and some 7,677 have been severely wounded.”

As we pointed out to the Star on July 30, on what basis can Dr. Abuelaish assert that the majority of dead Palestinians are women and children? We have seen varying statistics, but Al Jazeera for example, quoting the Gaza Health Ministry, reports that 315 children and 166 females have died as noted in their live blog of 1,361 dead and 6,780 injured.

Having not received a reply from the Toronto Star, on August 10 we conveyed to the Star’s Public Editor, Ms. Kathy English, the following regarding the lack of credibility in Dr. Abuelaish’s claim that the majority of dead Palestinians in the current conflict were women and children:

“According to data from the Palestinian Ministry of Health, 34 percent of those killed in Gaza from July 6-31 were children, women, elderly or female victims of an unknown age. The remaining deaths were a mix of male civilians and combatants, though breakdowns are disputed.”

“By Tuesday, this is what they had come up with: 1,865 “martyrs” from “Israeli aggression” since July 6: 429 under age 18, 79 over 60, 243 women. The Palestinian Ministry of Health does not categorize victims as civilian or combatant, but others do: The United Nations — which had a lower death toll, 1,814 — said that at least 72 percent were civilians, while two Gaza-based groups put the percentage at 82 (Al Mezan Center for Human Rights) and 84 (the Palestinian Center for Human Rights).”

“Its recent report said that as of 6 August, 1,843 Palestinians had been killed and 66 Israelis and one Thai national since Israel launched Operation Protective Edge on 8 July.

Of those Palestinians, the status of 279 could not be identified, at least 1,354 were civilians, including 415 children and 214 women, the UN body reported.

It was Abuelaish’s appeal that prompted the Ontario Ministry of Health, specifically Dr. Eric Hoskins (Minister of Health and Long-Term Care) to welcome the proposition of bringing 100 Gazans children to be treated at Toronto-area hospitals, and several of these medical facilities agreed in principle to treating the Gazan kids.

Speaking to The Canadian Jewish News, Shimon Fogel, CEO of the Centre for Israel and Jewish Affairs (CIJA), wondered why Gaza was being singled out for concern:

“We have yet to hear of a large scale initiative to bring children from other conflict zones in the Middle East to Canada for treatment. Tragically, there are thousands of children victimized by conflict in the broader region whose plight is going unnoticed and are in need of urgent medical care,” Fogel said.

“This raises the question: why the selective focus on Gaza? We always support Canada’s direct engagement in providing aid to address humanitarian situations worldwide in the most practical and effective ways possible. Israel regularly provides Gaza’s children with access to world-class medical treatment in Israeli hospitals.”

Dr. Abuelaish is a Palestinian doctor whose own children were killed by an errant Israeli artillery shell fired several years ago in hostilities with Palestinian terrorists and he wrote the book “I Shall not Hate” which chronicles his efforts to promote peace and not to preach hate. Meanwhile, this author did just that recently by claiming in a Globe and Mail op-ed that Israel is committing “genocide” in Gaza. Importantly, the Federal government isn’t buckling and Deepak Obhrai, the Parliamentary Secretary to the Minister of Foreign Affairs, took great issue with the Star’s (mis)characterization of Canada’s efforts to assist innocent Palestinian victims of Hamas as noted in an August 8 staff editorial. Obhrai stated the following in a letter to the Star on August 11: 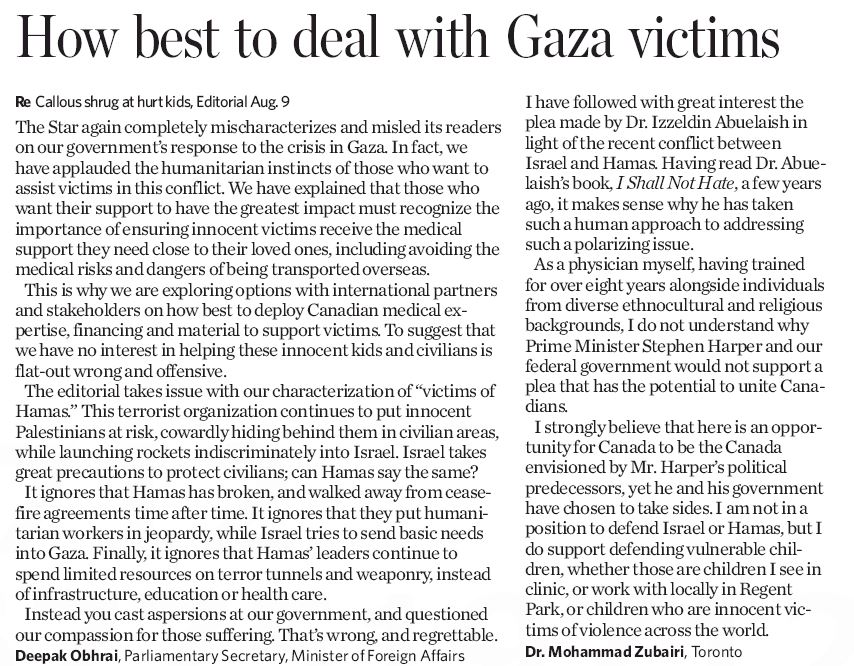 It took some persistence, but our complaint prompted the Star to retract Dr. Abuelaish’s egregious claim which no longer appears on the Star’ website. On August 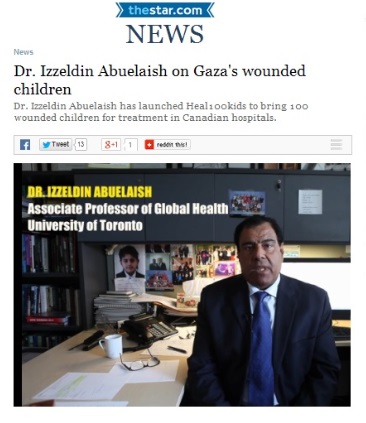 Despite our requests, regrettably, the Star has thus far failed to publish this clarification in its print edition, perhaps out of utter embarrassment. The Star has dedicated many column inches to this issue and it features what we refer to as a promotional video on its website for Dr, Abuelaish to advocate for his Heal100Kids campaign. Either way, failing to inform Star readers of an erroneous claim (now retracted) that it gave a platform to, is a fundamental violation of journalistic standards and practices.

This incident perfectly illustrates the power that media bias can have. How errors like these, left unchecked, can influence public policy.