The Toronto Star featured an article by reporter Patty Winsa yesterday entitled: “Gaza doctor’s refusal to hate is still an inspiration” which reported the following as undisputed facts:

Body paragraph: “On Jan. 16, 2009, Israeli military tank shells killed three of Abuelaish’s daughters and his niece and destroyed their home in Gaza.”

Photo caption: “Izzeldin Abuelaish’s daughters Mayar, left, Aya and Besson on a Gaza beach about a month before they were killed by an Israeli tank shell.” 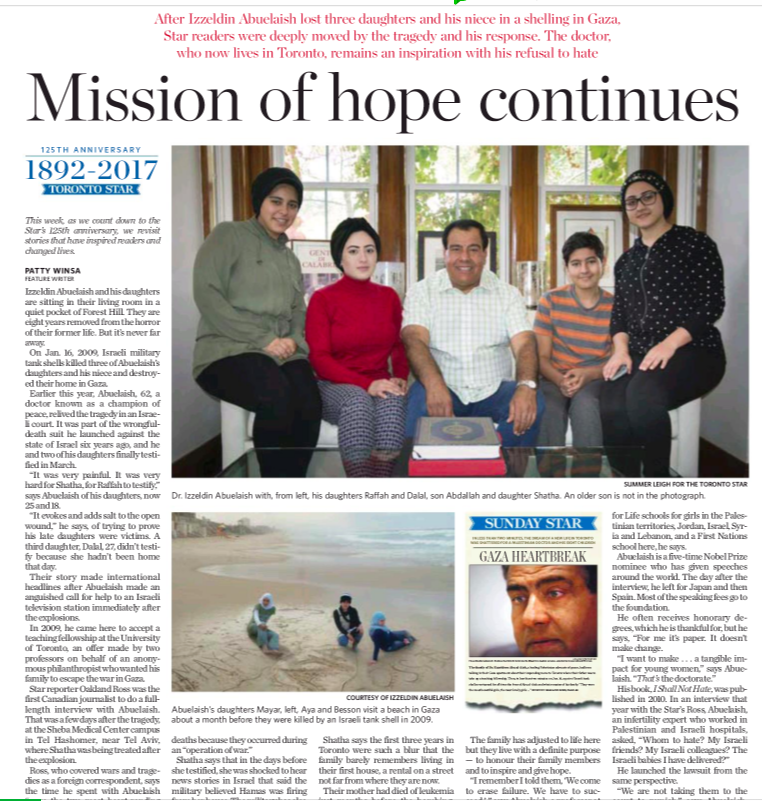 Presently, the Israeli Army says it may not have killed the Gaza doctor’s three daughters. The Star links to a Haaretz article reporting this Israeli claim and Ms. Winsa herself reports: “The military has also claimed it thought the Abuelaishes were Hamas lookouts, and has said that some of the substances in shrapnel removed from Shatha and a cousin who was wounded do not match material in use by the Israeli military, according to a story by the Israeli newspaper Haaretz.”

Presently, the veracity of the situation is unknown. There’s no verifiable evidence at this point which proves that Israeli military tank shells killed the three girls.

Mr. Abuelaish (and others) may claim that Israeli shells killed the girls, that’s fine, but for the Star to state that this is a matter of fact, is wrong. The references above should be in attribution. We believe this is deserving of a correction and have communicated this to the Star’s Public Editor. We await a reply to our concerns.