*** UPDATE *** The Toronto Star has reconsidered its decision and has now published our rebuttal commentary. Our letter entitled “Letter on Israel Crossed the Line“ can be found on the opinion section of the Star’s website.

In the latest of a long line of malicious libels waged against Israel, the Toronto Star gave a platform to Reverend Steve Berube of the United Network for a Just Peace for Palestine and Israel to claim that “… Israel has become a leading arms exporter by using Palestine as a field lab for testing weapons, especially in Gaza.” 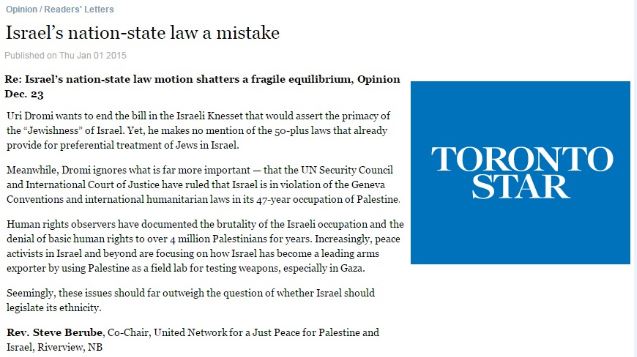 Published to the Toronto Star’s website on January 1, oddly on the topic of Israel’s nation-state law, Berube’s bilious slur certainly crossed the line. To claim that in an effort to become a leading arms exporter, that Israel is using the Palestinian territories as a “field lab for testing weapons” is abhorrent and without foundation. The implication drawn by Berube, a supposed man of the cloth, is that Israel is intentionally using its weapons not for self defence against terrorists trying to maim, murder and eliminate its civilians and wipe it from the map, but solely for financial gain and that Israel has no regard for the innocents who live in these areas. In reality, only the inverse is occurring.

Apart from being the most moral military in the world, Israel takes every effort to avoid civilian casualties when targeting terrorists and when using pinpoint precision weapons and surgical strikes to thwart out only those who intentionally target innocents and who fortify their infrastructures next to civilian areas. Israel’s weapons are used solely for defensive purposes, just like the name of its army, the “Israel Defense Forces” (IDF).

As a responsible, rational and moral nation, weapons are tested exclusively in non-combat areas without civilians in the vicinity. Colonel Richard Kemp, the former commander of British forces in Afghanistan and a career soldier who served with the United Nations and NATO, contends that Israel has done more to safeguard the rights of civilians in a combat zone than any other army in the history of warfare.

Israel has more to lose, not gain, from intractable military hostilities. This summer’s 50-day war with Hamas in Gaza cost Israel $2.5 billion, money that could have been used to help the Israeli poor, to bolster the Israeli economy, improve health care and medical infrastructure, etc.

One is free to debate the merits of Israel’s nation-state law, but libels such as Berube’s were not deserving of publication.

HonestReporting Canada brought these concerns to the attention of Toronto Star Public Editor Kathy English, along with having sent a rebuttal letter to the Star’s letter’s editor asking that it be published. Regrettably, the Star declined to publish our letter.

Interestingly, on January 16, Toronto Star Publisher John Cruickshank took to the pages of the Star arguing that to publish the Charlie Hebdo cartoons was tantamount to “blasphemy” against “more than a million Canadians say they are of the Muslim faith; more than 600,000 are Ontarians.” Cruickshank then added “We will not print them because we have too much respect for fellow Canadians of Muslim background.”

Call it hypocrisy and/or a lack of principled standards, the Star not only permitted the publication of Berube’s disgraceful slur against the Jewish state, but denied a platform for a needed criticism of this commentary. Does the Star not have respect for the 385,000 Jewish Canadians or 250,000 Jewish Ontarians, and the scores of Canadian supporters of Israel?

Media outlets, both domestic and international, have been arguing the merits and drawbacks of publishing the Prophet Mohammed cartoons. The Star is certainly entitled to make the editorial decision to not publish the caricatures as it contends that it would expose Canadian Muslims to unfair contempt, but why then would it publish Berube’s blasphemy against Israel which exposes Canadian Jews and supporters of Israel with undue contempt?

If you are outraged that the Star would defend it’s publishing this blasphemous libel against Israel, please send complaints to Toronto Star Public Editor Kathy English at kenglish@thestar.ca.