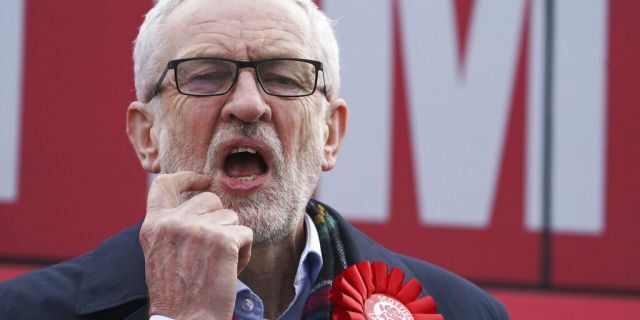 In the Toronto Star on December 5, Leo Panitch was intellectually dishonest and morally obtuse by claiming that not only is U.K Labour Party Leader Jeremy Corbyn “not an antisemite… the historical record shows Jeremy Corbyn is a defender of Jews.”

Panitch, an emeritus professor at York University and author of a book on socialism, would have you believe that Corbyn has been wrongly vilified and far from being a hater of Jews, he’s the Jewish community’s best friend and most trusted ally. The trouble is, there’s no substance to this inflammatory and fatuous claim.

Jeremy Corbyn is not just an enabler of antisemitism, but it’s leading proponent and architect. For several decades, he has stood shoulder-to-shoulder with terrorists, Holocaust-deniers, neo-Nazis, and dictators.

Here is Panitch’s commentary that appeared in print in the Star: 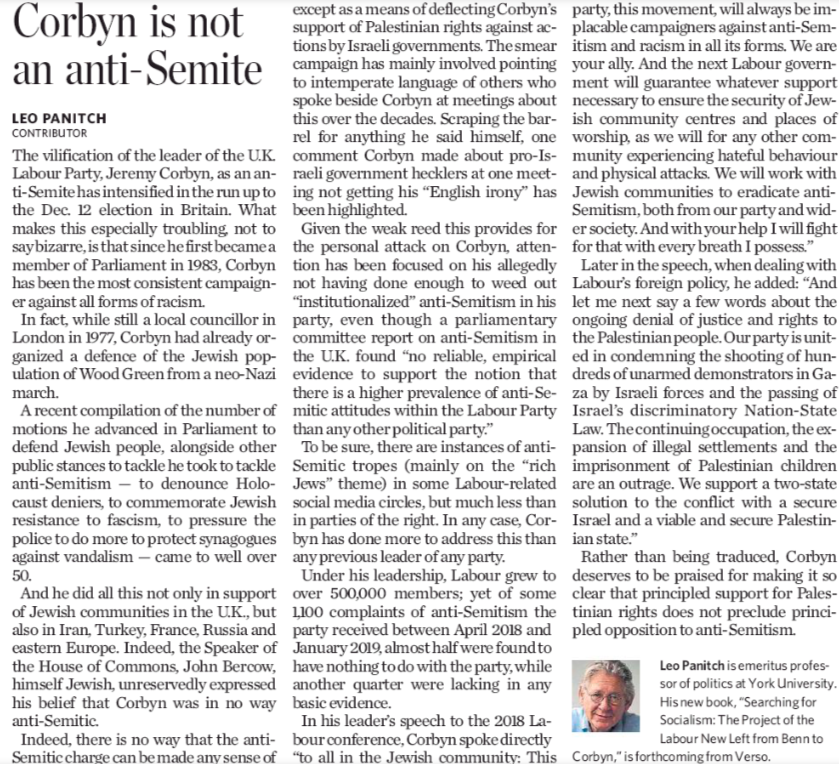 It’s Corbyn who regards Hezbollah and Hamas terrorists committed to the genocide of world Jewry and Israel’s destruction, as his friends. It’s Corbyn who has made common cause with bigots, xenophobes and extremists that he regards as his friends, colleagues, and heroes.

It’s Corbyn who subscribes to the mindset that Zionism – the right of Jews to live in their historic homeland, Israel ­– is a racist endeavour. This claim is in and of itself antisemitic according to the International Holocaust Remembrance Alliance’s (IHRA) definition of antisemitism, of which, Canada is a member.

It’s Corbyn who once described convicted Palestinian terrorist Marwan Barghouti as an “iconic figure for ordinary Palestinians” comparing him to Nelson Mandela.

It’s Corybn who praised antisemitic poet Ernest Jones and who wrote the foreword for a book that claims Jews control banks and the press.

It’s Corbyn who hosted an event at the House of Commons on Holocaust Memorial Day that that compared the Israeli government to the Nazis.

It’s Corbyn who had no problem working for and being paid by Iran’s state-funded propaganda channel, Press TV.

According to New York Times editor and commentator Bari Weiss: “The fish rots from the head, and so it has with Labour. According to Britain’s chief rabbi, Ephraim Mirvis, there are 130 cases of outstanding complaints of anti-Semitism against Labour Party members. Ninety-three percent of British Jews say they won’t vote for Labour. Forty-seven percent say they will “seriously consider” emigrating if Labour wins. And yet the latest polling shows Labour rallying.”

The Jewish Labour Movement has submitted damning evidence of “thousands” of unresolved examples of antisemitism to the Equalities and Human Rights Commission as part of its investigation to determine whether Labour has unlawfully discriminated against Jews. The 53-page report based on testimonies of 70 current and former Labour staffers, says Corbyn’s Labour Party features ‘endemic, institutional antisemitism,’ accusing its leader of anti-Jewish bias and for personally engaging in antisemitism.

Jewish groups have long accused Corbyn of permitting antisemitism to rise within the ranks of the party, a party once considered the natural home of British Jewry.

To highlight just a few of many examples available:

Vicki Kirby, vice chairwoman of the Labor Party’s Woking branch was suspended for tweeting that Jews have “big noses” and “slaughter the oppressed.”

Labor councilor Aysegul Gurbuz was suspended for praised Hitler on Twitter saying he’s the “greatest man in history”. She also said she hoped Iran would use a “nuclear weapon” to “wipe Israel off the map.”

Labor MP Naz Shah was suspended for calling for Israel to “relocate” to America.

According to the Atlantic: “The vice chair of the Labour steering group Momentum accused Jews of financing the slave trade. A member of the party’s executive committee questioned the numbers killed at Auschwitz. Jewish Labour MPs became the objects of hate mail from the party’s grassroots. One was referred to as the MP for Tel Aviv.”

All of this explains why three leading Jewish newspapers took the unprecedented step of penning a joint editorial warning that a Corbyn-led government would pose an “existential threat” to British Jewish life. Even the left-leaning Haaretz newspaper remarked that a Corbyn win would make British Jews feel like second-class citizens, where the state doesn’t protect its citizens, specifically its minorities. Recently, the front page of the Daily Telegraph said that Jeremy Corbyn has made UK Labour a welcoming refuge for antisemites. The party is cast in his image.”

Despite repeated promises to root out antisemitism in the Labour party, Jeremy Corbyn has not done so. With worldwide Jew-hated surging and with Jews being used as scapegoats, silence is complicity. In this vacuum, it’s no surprise that in recent days a British rabbi who had just left synagogue was beaten on the street by teenagers screaming, “Kill the Jews.”

To put all this into perspective, can you imagine a Canadian politician running for public office with a track record and resume like Jeremy Corbyn’s? It would be unfathomable.

Jews know antisemtism when they see it. As Rabbi Lord Jonathan Sacks articulately said in an address to the House of Lords in a debate on antisemitism in Britain: “A thousand years of Jewish history in Europe added certain words to the human vocabulary: forced conversion, inquisition, expulsion, ghetto, pogrom, Holocaust. Once hate goes unchecked, the road to tragedy is short… Antisemitism, or any hate, become dangerous when three things happen. First: when it moves from the fringes of politics to a mainstream party and its leadership. Second: when the party sees that its popularity with the general public is not harmed thereby. And three: when those who stand up and protest are vilified and abused for doing so. All three factors exist in Britain now. I never thought I would see this in my lifetime. That is why I cannot stay silent. For it is not only Jews who are at risk. So too is our humanity.”

The stakes are too high to allow Jeremy Corbyn’s antisemitism to be sanitized. Jews have long decried Never Again as a pledge to deter a future genocide. Now, Jews rightfully decry: “Never Corbyn”.

If you take serious issue with Leo Panitch’s polemic as being fatuous, intellectually dishonest and morally obtuse for claiming that Jeremy Corbyn is not an antisemite and is the Jewish community’s best defender, please send a letter to the Star: lettertoed@thestar.ca.