On May 16, HRC broke the news that hundreds of Canadian journalists had signed a partisan and one-sided anti-Israel open letter lobbying Canadian news organizations on how to cover the Israeli-Palestinian conflict.

Journalists from CBC, the Toronto Star, Globe and Mail, CTV News, Macleans, Yahoo News Canada, Chatelaine, Global News, IPolitics, all signed the letter accusing Israel of carrying out “indiscriminate attacks” and “ethnic cleansing” of Palestinians, despite being duty bound to be objective and politically neutral.

HRC has liaised with all news organizations, many who have acknowledged and upheld our concerns and some who have told staff that they are no longer able to report on matters related to the Arab-Israeli conflict due to their anti-Israel biases. 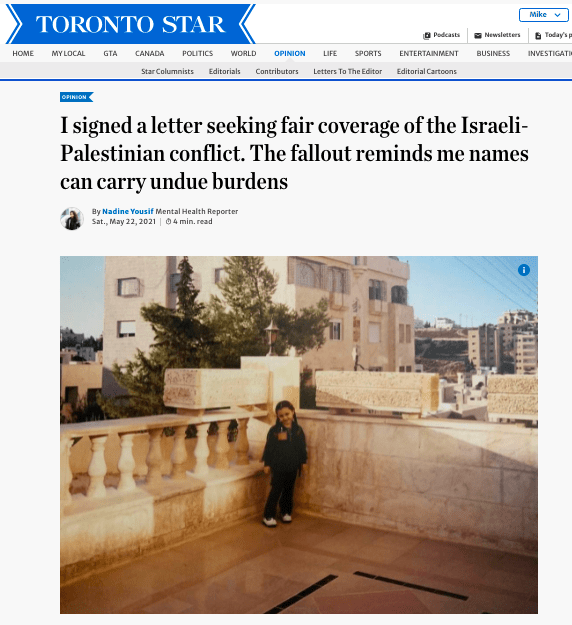 For example, Vice News has reported that several CBC journalists have been told that they cannot report on the conflict.

We also encourage you to read Andrew MacDougall’s column in the Ottawa Citizen where he cautions on this issue that “reporters must not become activists, no matter how worthy the cause.”

By way of example, on May 23, the Star allowed staff reporter/anti-Israel activist Zena Salem to author this report: “Rabbi charged after steps are defaced in front of Israeli consulate in Toronto”. The article quoted David Mivasair who was charged for mischief and referenced his anti-Israel group, Independent Jewish Voices. Importantly, the Star didn’t feature a quote from Israeli Consul General Galit Baram who would, if given the opportunity, condemn Mivasair’s actions which it’s alleged violated Canadian law.

On May 22, Nadine Yousif, a mental health reporter/anti-Israel activist for the Star, wrote an opinion column (yes, a reporter was allowed to write her personal opinions on a matter she can report on) where she claimed that “I signed a letter seeking fair coverage of the Israeli-Palestinian conflict. The fallout reminds me names can carry undue burdens.” In her commentary, Yousif made the unfounded accusation that she was targeted for signing the letter because “I am a signatory with an Arab-sounding name”.

She writes in full:

I am a signatory with an Arab-sounding name and had no hand in writing the letter. Like most journalist signatories, the letter first came to my attention on Twitter. I read it carefully. Among several points, it criticized the CBC’s failure to report on a recent Human Rights Watch report that found Israel guilty of apartheid, a term that has long been debated by academics when discussing the plight of Palestinians in the region. This, despite the outlet’s willingness to publish stories quoting the international organization on other humanitarian issues, such as the genocide of the Muslim Rohingya in Myanmar. The letter further criticized stylistic policies in some newsrooms that avoid the publishing of the word “Palestine.” Policies like these systematically contribute to coverage of the issue that skews towards pro-Israel partisans. As a journalist, I believe these policies are inequitable. They’ve resulted in reporting that tiptoes around historical context worthy of nuanced, public discourse, and have even led to retractions and apologies that were not warranted.”

No Ms. Yousif, you were not “targeted” because of your faith, nationality, etc. You and all other journalists were equally critiqued because you lent your name to an anti-Israel open letter which stood as a flagrant violation of basic journalistic standards.

On May 21, Evelyn Kwong, a team based editor/anti-Israel activist for the Star, wrote an article entitled: “‘Aren’t we human and worth life?’ Palestinian artist’s murals of ‘hope’ destroyed by airstrikes in Gaza.” Kwong covered how a Gaza-based artist feels “trapped under occupation” – though Gaza isn’t occupied by Israel, a fact Kwong conveniently ignored. Kwong covered the devastation in Gaza, though Hamas wasn’t held responsible and ignored the devastation in Israel.

Torstar’s own Journalistic Standards Guide leads by saying: “Ethical journalism is the foundation of Torstar news organizations’ integrity and is essential to our credibility with our audiences.”

The Guide says: “Journalists who abuse the power of their professional roles for selfish motives or unworthy purposes are faithless to that public trust.” It then describes how journalists are required to be “impartial,” to not make “partisan” comments, and to act with “journalistic integrity.”

The Star’s own social media policy stipulates: “Staff must not do anything on social media that damages the company’s reputation for fair journalism. That includes making partisan or offensive comments, endorsing candidates or — with the exception of opinion columnists — taking sides on issues our newsrooms are covering.” The Star’s own conflict of interest guidelines says: “We seek primarily to ensure that our reporters’ reputations as fair-minded fact-finders are not compromised by public displays of political or partisan views on public issues, nor influenced by personal involvement or personal axe-grinding on issues we cover.”

HonestReporting Canada has again conveyed our concerns directly to the Star about its failure to enforce its own policies and has filed a complaint with the National News Media Council, which the Star is a member of, in light of the Star’s failure to address this matter.