Today, The Toronto Star published our rebuttal to an Azeezah Kanji oped it published the day prior which, on top of being an anti-Israel rant, had baselessly claimed that Israeli movie star Gal Gadot supports “violence against the women, children and men of Palestine…” 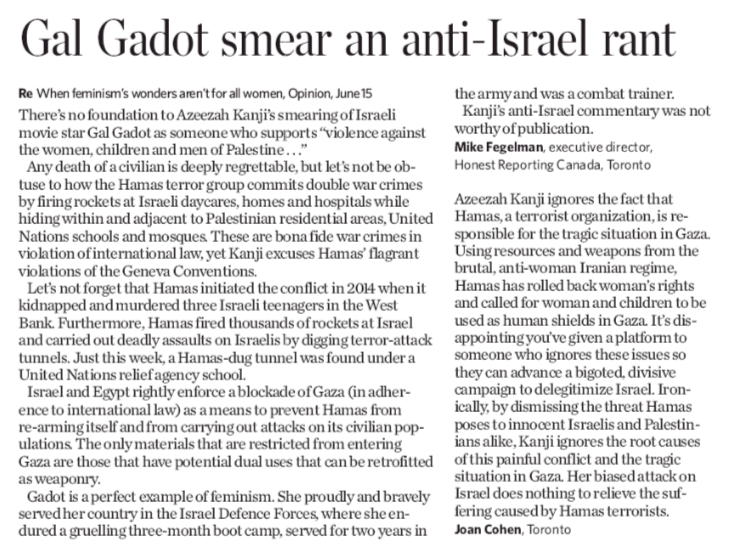 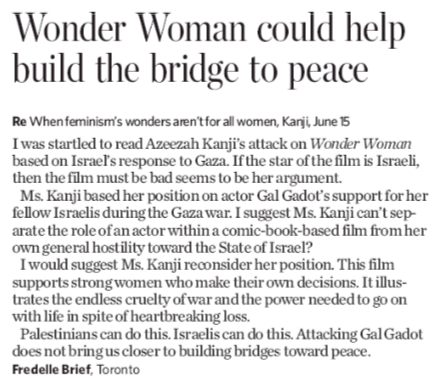 There’s no foundation to Azeezah Kanji’s smearing Israeli movie star Gal Gadot as someone who supports “… violence against the women, children, and men of Palestine…”

Kanji’s commentary which was published in the Toronto Star today was beyond the pale. 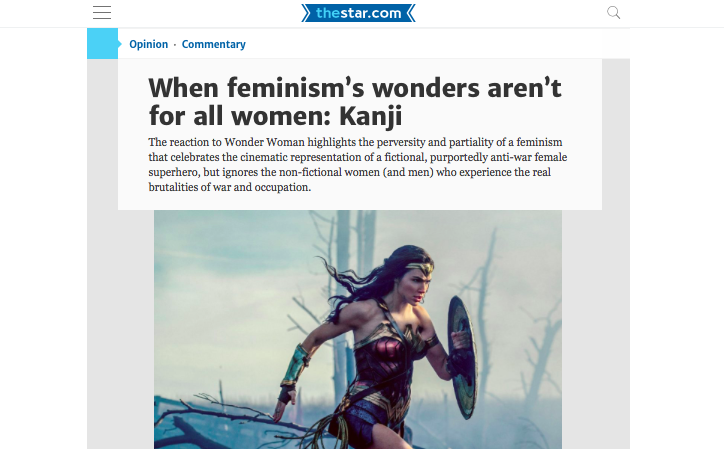 Any death of a civilian is deeply regrettable, but let’s not be obtuse to how the Hamas terror group commits double war crimes by firing rockets at Israeli daycares, homes, and hospitals while hiding within and adjacent to Palestinian residential areas, United Nations schools, and mosques. These are bona fide war crimes in violation of international law, yet “legal analyst” Kanji excuses Hamas’ flagrant violations of the Geneva Conventions.

Let’s not forget that Hamas initiated the conflict in 2014 when it kidnapped and murdered three Israeli teenagers in the west bank. Furthermore, Hamas fired thousands of rockets at Israel and carried out deadly assaults on Israelis by digging terror-attack tunnels. Just this week, a Hamas-dug tunnel was found under an UNWRA school.

Israel and Egypt rightly enforce a blockade of Gaza (in adherence to international law) as a means to prevent Hamas from re-arming itself and from carrying out attacks on its civilian populations. The only materials that are restricted from entering Gaza are those that have a potential dual-uses which can be retrofitted as weaponry.

Gal Gadot is a perfect example of feminism. She proudly and bravely served her country in the Israel Defense Forces (IDF) where she endured a grueling 3-month boot camp, served for 2 years in the army, and was a combat trainer.

Kanji’s vapid anti-Israel commentary was not worthy of publication.

Take Action Now: Using your own words, please take the time to write a letter to the editor and sent it to the Toronto Star rebutting Kanji’s anti-Israel commentary. Please refer to her June 15 op-ed entitled: “When feminism’s wonders aren’t for all women” and send letters to:  lettertoed@thestar.ca.