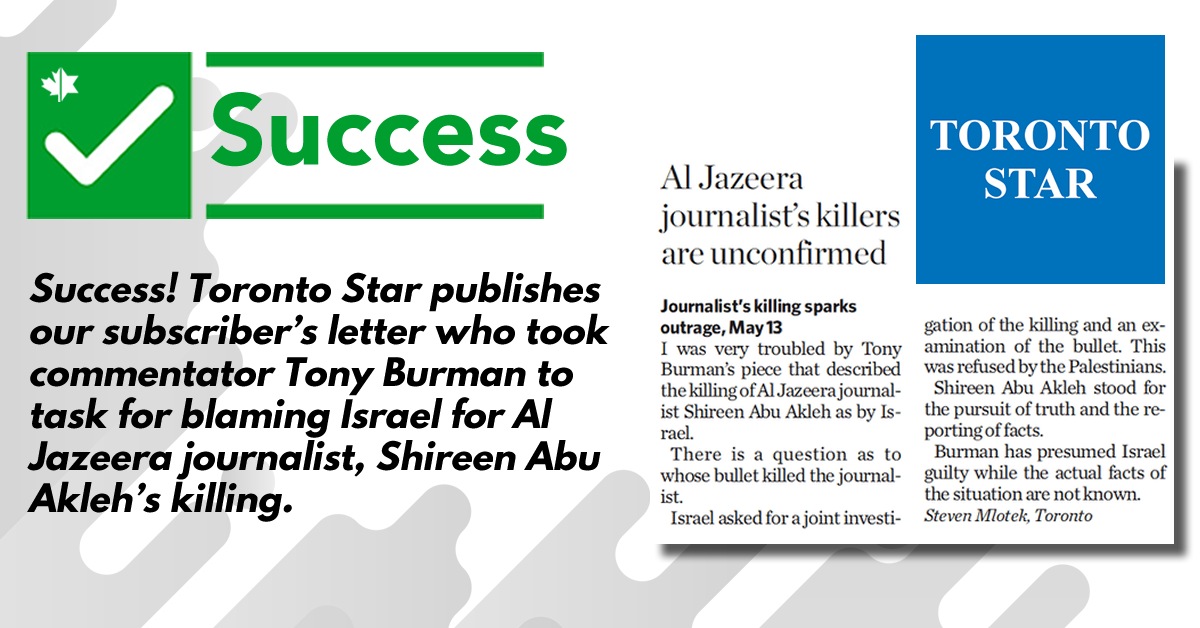 Subsequent to our May 16 alert about how Toronto Star commentator Tony Burman accused Israel of killing Al Jazeera journalist, Shireen Abu Akleh, an HonestReporting Canada subscriber was published in the Star on May 18 refuting his claims: 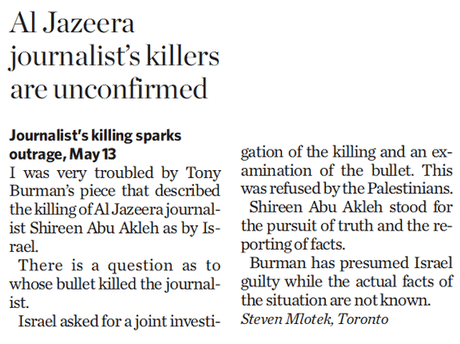 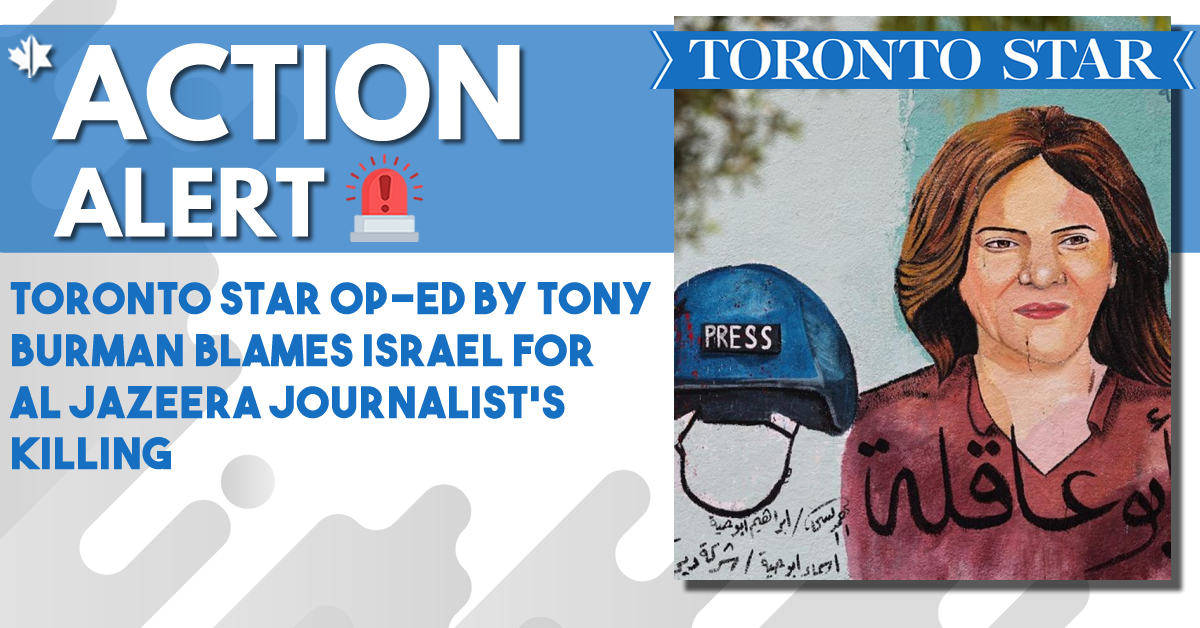 In his recent opinion article, “The killing of Shireen Abu Akleh in the West Bank spotlights danger faced by both journalists and Palestinians,” Tony Burman brazenly uses the recent tragic and accidental death of 51-year-old Shireen Abu Akleh, an Al Jazeera journalist, to disseminate anti-Israel misinformation.

Abu Akleh was killed on May 11 in the Palestinian town of Jenin, covering Israeli military activities meant to arrest suspects in a recent string of Palestinian terrorist attacks in Israel.

As Abu Akleh was killed amidst violent exchanges between Israeli troops and Palestinian terrorists, the exact circumstances of her death are not clear.

This highly suspicious refusal on the part of the Palestinian Authority is ignored by Burman, who instead insists that Israel is culpable for her death and that it is the “fervent hope of the Israeli government that Abu Akleh’s death will soon be forgotten by a distracted world.”

There is no substance to Burman’s allegation.

First, the lack of a full and transparent investigation by the Palestinian Authority, as requested by Israel which pledged its cooperation, is highly suspicious and leads to the justifiable assumption that the Palestinian leadership could be hiding relevant details about her death.

Second, on a more fundamental level, the circumstances of her death mean the ultimate culpability for her tragic passing lies entirely with the Palestinian gunmen who engaged Israeli forces in the town of Jenin. The Israeli military entered Jenin to locate suspects in terrorist attacks, and in Jenin, they were attacked with explosive devices and gunfire.

There should be no mistake: regardless of the source of the bullet which inadvertently killed Abu Akleh, the true culprits are the Palestinian terrorists in Jenin who actively turned their town into a warzone in the defense of terrorism suspects.

If police enter the town of a suspected murderer, and the murderer’s defenders and accomplices lob explosive devices at the police, then they, not the police acting in the enforcement of the law, are responsible for outcomes.

Amidst his use of the tragic death of Abu Akleh as a cudgel against Israel, Burman writes: “Israeli leaders have come to acknowledge in recent weeks that there is a place in this world for courageous freedom fighters battling military occupation, they hastily apply the absurd qualifier that these freedom fighters can only be Ukrainian, and the military occupiers only Russian.”

Burman’s reference to Palestinian “freedom fighters” is nothing short of scandalous. Israel has faced, not for weeks or even months, but years and decades, the scourge of murderous Palestinian-Arab terrorists, who, egged on, encouraged and rewarded by the Palestinian Authority, have claimed the lives of well over one thousand innocent Israeli civilians, murdered in the most horrific ways.

Israel, therefore, has not only the right but indeed the moral obligation to hunt these Palestinian terrorists and their enablers and to help ensure that they cannot hurt anyone else.

Burman’s poor comparison between the Israeli-Palestinian conflict and the Russian invasion of Ukraine is also remarkably weak. In Europe, Russia invaded the sovereign country of Ukraine. In Israel, whether referring to eastern Jerusalem or Judea & Samaria (sometimes called the “West Bank”), Israel is in possession of extensive legal and historical rights to the land, although this has not stopped the Jewish State from offering huge swaths of territory to the Palestinian leadership in its attempt at securing long-term peace.

Abu Akleh, as a respected journalist, stood for the pursuit of truth and the reporting of facts. Burman’s disinformation-laden opinion article represents exactly the opposite. Toronto Star readers deserve a more factual and less ideologically-driven approach under any circumstances, but particularly under the guise of a defense of a dead journalist, Burman’s opinion piece is particularly tone-deaf and offensive.

Send a letter to the editor of the Toronto Star to communicate your concerns about Tony Burman’s presuming Israel guilty, not innocent, by blaming Israeli soldiers for Al Jazeera journalist Shireen Abu Akleh’s killing, while the veracity of the matter is unknown. Send letters to: lettertoed@thestar.ca.