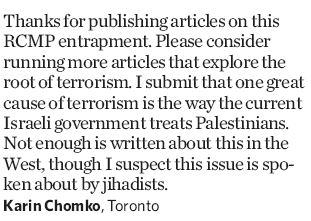 In a letter published in the Toronto Star today (see right or online here), Karin Chomko has the temerity to claim that the way the “current Israeli government treats Palestinians” is “one (of the) great cause(s) of terrorism”.

Newsflash: the leading root cause of terrorism continues to be the radicalisation of Muslim youth to murder and maim innocents worldwide and in Israel proper. The goals of terrorists is war, destruction and total subjugation to radical Islam. Palestinians weened on incitement and indoctrinated to hate Jews, engage in terrorism to purge the region of its 6 million plus Jews and the Jewish state from the world map.

Millions of people around the world have legitimate grievances, but they don’t engage in the murder of innocents to seek a remedy for their ailments.

Israel, the only liberal democracy in the Mideast, is not the “cause” of terror, but is its cure.

Send a letter to the Star (lettertoed@thestar.ca) to condemn this outrageous assertion.